Chef Warren started his career as a commis chef in a local small boutique hotel on Cleeve Hill Cheltenham, where he learnt his trade whilst going to Cheltenham college.

From here he became junior sous chef at the Swan Hotel Bibury which had two rosettes. During his time at the Swan Hotel he learnt more of the fine dining aspect of his trade from some great chefs with a wealth of knowledge. In the summer the brigade of chefs would pick herbs & vegetables from the hotel grounds & fish for fresh trout in the river Coln.

Chef Warren then joined P&O Cruises early in the year 2000 where the on board chefs would caterer for 2200 passengers and 850 crew 24 hours day, 7 days a week. Traveling to the four corners of the world sampling some traditional foods from different countries for example clam chowder in San Francisco and bouillabaisse in Marseille.

He then joined Cheltenham Racecourse as a production chef, working at some world-famous events including the Grand National, the Derby, the British Grand Prix and Henley Royal Regatta to name but a few. Chef Warren worked his way through the ranks to sous chef at Cheltenham where he then became Head Chef at Warwick Racecourse. After 2 years of heading up Warwick Racecourse, Chef Warren became Head chef at Cheltenham Racecourse & Henley Royal Regatta. He designs the menus for the Racecourse customers and racegoers on four main principle’s: seasonality, local suppliers where possible, sustainability and the best quality ingredients. 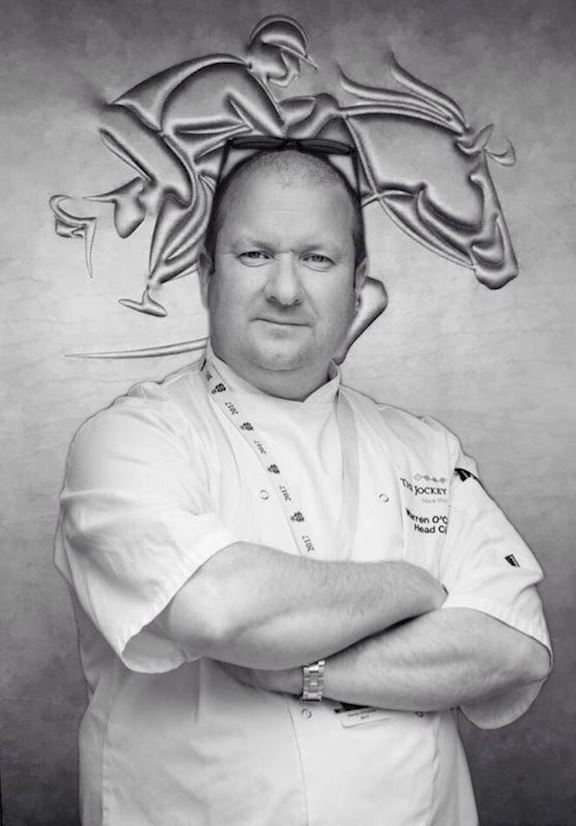 The Big Festival Breakfast is a great way to start your day ahead of The Festival™ supporting WellChild.

A fresh salmon fillet is cured over a few days with added beetroot to give it colour and depth of flavour.

This dish is made up of some characteristic elements. Polonaise is an old-style finish for vegetables, marquis potatoes are a classic preparation of piped mashed potato. A white wine sauce is enhanced with a little saffron.

The chocolate fondant is a favourite in the O’Connor household, particularly at this time of year. This rich chocolate dessert is both warming and comforting.