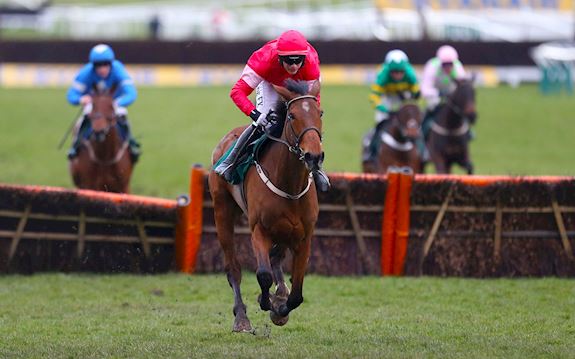 Tuesday, December 11, 2018 - Star mare Laurina (Willie Mullins IRE) could have her first start outside of novice company in the £140,000 G2 Unibet International Hurdle (3.05pm, 11 entries) at Cheltenham this Saturday, December 15, day two of The International.

The two-mile, one-furlong contest forms part of the Unibet Road to Cheltenham and is a leading trial for the G1 Unibet Champion Hurdle at The Festival™ presented by Magners in March.

Unbeaten in four starts last season against her own sex, Laurina's standout performance came at The Festival™ presented by Magners when she routed the opposition by 18 lengths in the G2 Trull House Stud Mares' Novices' Hurdle, run over the same course and distance at the Unibet International Hurdle. She is the 4/5 favourite with sponsor Unibet.

Summerville Boy (Tom George, 5/1 with Unibet) was also on the scoresheet at The Festival™ presented by Magners, when taking the G1 Sky Bet Supreme Novices' Hurdle by a neck from Kalashnikov.

The six-year-old finished fourth, beaten 22 lengths, on his comeback this season behind Unibet Champion Hurdle hero Buveur D'Air in the G1 Fighting Fifth Hurdle at Newcastle on December 1.

Tom George said: "Summerville Boy has come out of the Fighting Fifth fine. The Fighting Fifth was his first run of the season and whilst that form was way below his Supreme Novices' win, he has been all right since and nothing has come to light with all the tests he has had. It was disappointing, but we have to move on and he was taking on top-class two millers on his first start of the season. The Unibet International Hurdle is an option - we will see how he is during the week. I am not sure about the Christmas Hurdle around Kempton, but there aren't many options."

Popular 10-year-old The New One (Nigel Twiston-Davies, 8/1) could create history by becoming the first four-time winner of the Unibet International Hurdle. Successful in 2013, 2014 and 2016, he was runner-up last year when going down by a length and a quarter to My Tent Or Yours.

My Tent Or Yours' trainer Nicky Henderson has three entries to choose from, as he chases his fifth victory in the Unibet International Hurdle. The trio is made of the Simon Munir and Isaac Souede-owned pair of Call Me Lord (7/1) and We Have A Dream (8/1), plus Brain Power (6/1) who has been racing over fences of late.

Day two of The International sees competitive handicap chase action courtesy of the £130,000 G3 Caspian Caviar Gold Cup (1.55pm, 18 confirmations) over an extended two and half miles. The Gary Moore-trained Baron Alco is chasing a famous double after his victory in last month's BetVictor Gold Cup at The November Meeting.

The International gets underway on Friday, December 14, with a seven-race programme headlined by the £60,000 G3 CF Roberts 25 Years Of Sponsorship Handicap Chase (2.30pm, 19 entries) over three and a quarter miles.

The forecast is mostly dry through the week up until Friday, with temperatures of seven to eight degrees Celsius.