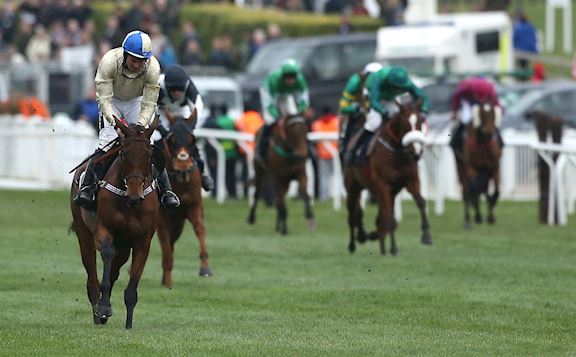 Shropshire point-to-point trainer Philip Rowley and his wife Mel finally won the St James's Place Foxhunter Chase having gone close in the previous two runnings.
Hazel Hill, owned by Diana Williams and ridden by Alex Edwards, came good for the Rowleys' stable after Barel Of Laughs had won place money in the 'hunters' Gold Cup' of 2017 and 2018. Today there was to be no near miss, as Hazel Hill (7/2f) raced to the lead in the home straight, jumped the final fence big and bold, and scored by four lengths and seven lengths from Shantou Flyer (7/1) and Top Wood (33/1) - the last-named was runner-up last year. Also worthy of mention was fourth home Road To Rome, a maiden point-to-pointer at the start of the season, and whose bid to make all only faded from the second-last fence.
Phil Rowley, who is Britain's reigning champion point-to-point trainer, said: "I can't quite believe it's happened. We felt the horse had a massive chance, but two years ago Barel Of Laughs was 100/1, so no pressure and a lovely day out, and then today this horse goes off favourite and there is a lot of pressure. It puts a totally different perspective on the race.
"Alex did really well and eventually the horse won quite easily. He came up in his hands at the last. We knew Road To Rome would set the pace and so Alex and I chatted and agreed that he might not stop, so he knew where he had to be. He sat behind him, but close enough to stay in touch. Our lad has only run under Rules three times [all in hunters' chases], and we wanted to switch him off and get into a rhythm.
"Alex and I have formed a great team and get on so well. He works so hard, we all do, and all the clichés fit when this happens. We were lucky that Jane Williams gave up riding, and her mother very kindly asked if we would train him. I doubt he would go to Aintree, and I doubt the owners would want him to, but Punchestown is a possibility, and back here next year."
Mel Rowley said: "We are so lucky to have such lovely owners. Phil is a genius and I'm so proud of him because he leaves no stone unturned and it's proved itself. This is our Gold Cup and what dreams are made of."
Alex Edwards, who won the British point-to-point title last year, and who was second in yesterday's Fulke Walwyn Kim Muir Chase on Kilfilum Cross, said of Hazel Hill: "He's a special horse. They went some gallop and I wasn't too keen to get involved too soon - and a loose horse wasn't helping, so I sat and waited until I got to the bottom of the hill to make a move. He does quicken up nicely, so you always have that in reserve - and he can come up when you ask him. I'm very lucky with the horses I ride."
Jane Williams, daughter of the winning owner and a former British champion pointing rider, said: "Alex played it very cool and gave him a great ride. I was panicking thinking the loose horse was in the way, and then I couldn't watch, but he flew up the hill. A couple of years ago we thought this would be a race for him, but last season he wasn't quite right and this time the ground is spot on and he's matured."
Sam Waley-Cohen, who rode Road To Rome, said: "The hill found him out - he jumped for fun and enjoyed himself, but didn't quite get up the hill. With two to go I thought he might cling on when a loose horse came past and he found a bit more, but it was soon too much. He's run a great race, and Hazel Hill is a star." 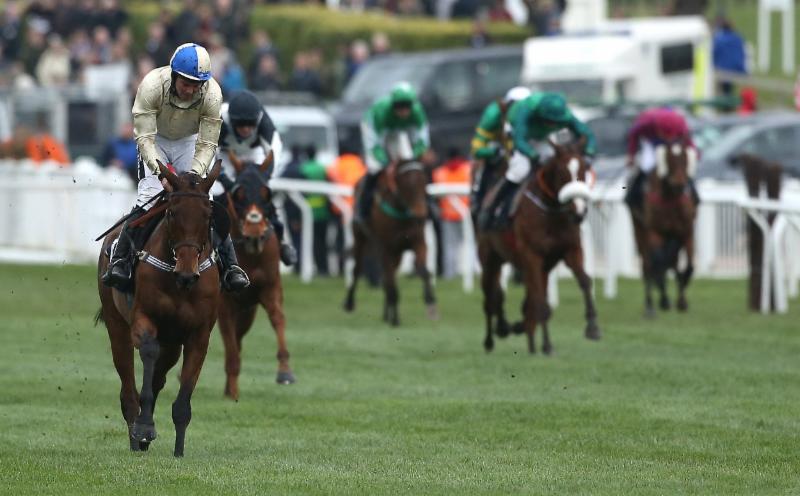 FLYER DELIGHTS MAXWELL
David Maxwell, son of jump racing stalwart and horse feed expert Judy Maxwell, finished second on 7/1 chance Shantou Flyer, and was understandably delighted with his ride in the £45.000 St James's Place Foxhunters Challenge Cup Open Hunters' Chase.
Maxwell said: "We just kept kicking, I think all the pace came from the front.
"We will have a look at him after the race, but you would have to fancy him at Aintree (Fox Hunters, April 4). He jumped round the National last year (pulled-up before five out in the Randox Health Grand National). He would deserve to go and take his chances there.
"God what fun. I mean what is to beat that, galloping around Prestbury Park a couple of times."
Kelly Morgan, trainer of the third home 33/1 shot Top Wood, who has been absent from a race course for 322 days, was delighted by her charge's performance.
Morgan said: "He seems to come alive when he comes to Cheltenham. We wanted to get a prep run into him in January, but the ground was too quick. He has to have his runs slightly spaced out. We didn't have time to get a prep run into him. It was possibly a brave move coming here but we didn't have a lot of options. He is such a legend. He never lets you down.
"If he comes out of this well, he has to have an entry for Aintree (Fox Hunters), it might come too soon.
"We won't go for Punchestown. We took him over there last year and he didn't travel well."
Morgan, who is in her first year as a licensed trainer, added: "We only have six horses in and Johnny (Weatherby, Top Wood's owner) is so supportive. Let's hope we can go on from here."
Tabitha Worsley, rider of Top Wood, added: "It was some training performance - to get him here after so many days out. I am so grateful for the ride. He has jumped from fence to fence and travelled really well. You can't ask for much more than that."
4.10pm St James's Place Foxhunter Chase
1 Hazel Hill (Mrs D Williams) Phillip Rowley 11-12-00 Mr Alex Edwards 7/2f
2 Shantou Flyer (David Maxwell Racing Limited) Richard Hobson 9-12-00 Mr David Maxwell 7/1
3 Top Wood (J R Weatherby) Kelly Morgan 11-12-00 Miss Tabitha Worsley 33/1
24 ran
Distances: 4, 7
Time: 6m 50.75s
Tote   Win: £4.80             Places: £2.00, £2.80, £11.20         Exacta: £31.40
Phillip Rowley - 1st winner at The Festival
Alex Edwards - 1st winner at The Festival