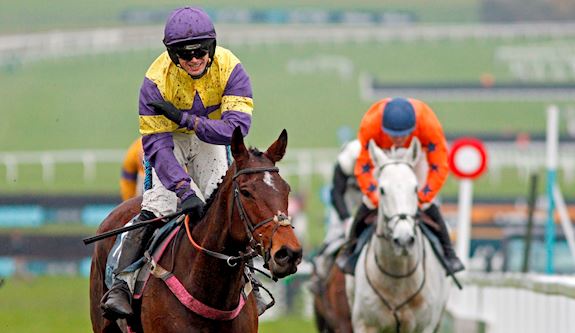 Champ, Might Bite, Kalashnikov & Mister Whitaker among the entries with terrific action in prospect on New Year's Day at Cheltenham

Cheltenham Racecourse sees in the New Year with a tremendous seven-race programme on New Year's Day, Wednesday, 1 January, 2020. For what will also be the start of a new decade, leading Irish bookmaker Paddy Power returns to the Home of Jump Racing to sponsor three races.

The most valuable race of the afternoon is the £70,000 G3 Paddy Power Handicap Chase (2.00pm) over an extended two and a half miles. Among the 21 entries is Happy Diva (Kerry Lee), who landed the G3 BetVictor Gold Cup over the course and distance at The November Meeting. The 5/1 favourite with Paddy Power is Kalashnikov (Amy Murphy), a G1 scorer at Aintree last season and the nose runner-up to Oldgrangewood (Dan Skelton) in a handicap chase over two and a half miles at Newbury on 29 November.

Also prominent in the market with Paddy Power are Magic Saint (Paul Nicholls), fifth in the BetVictor Gold Cup before winning over an extended two miles at Newbury, G3 Caspian Caviar Gold Cup fourth Cepage (Venetia Williams) plus Mister Whitaker (Mick Channon), who landed the Listed Close Brothers Novices' Handicap Chase at The Festival™ presented by Magners in 2018 and was last seen when successful at Cheltenham in the G2 Cure Parkinson's And Hambo Foundation Silver Trophy Chase at The April Meeting last season.

Kauto Riko (Tom Gretton) came close to causing the upset of the season when starting at 100/1 and going down by three-quarters of a length to Top Notch in the G2 Fitzdares Peterborough Chase at Huntingdon on 8 December. Kauto Riko, who will turn nine on 1 January, is from the family of the great Kauto Star (his dam is a half-sister to the dual Cheltenham Gold Cup winner) and ran well on his one previous visit to Cheltenham when a staying-on eighth behind Siruh Du Lac in the G3 Brown Advisory & Merriebelle Stable Plate Handicap Chase at The Festival last season.

"He ran a brilliant race to finish second in the Peterborough Chase last time out and has come out of that very well.

"Cheltenham is something we are strongly considering along with a couple of other options and we could head back to the track in the spring for The Festival. I just need to take another look at things over the next couple of days

"He has been a credit to the yard, and we are looking to seeing him out on the track again."

Also under consideration for the Paddy Power Handicap Chase is Fixed Rate (Charlie Mann). Fixed Rate won both his starts over fences last season and returned to action with a close second under top-weight in a handicap chase at Aintree on 7 December.

Upper Lambourn-based Mann said today: "Fixed Rate ran a fine race on his return to action at Aintree. He has come out of that race in good form.

"He is entered at Cheltenham and Musselburgh on New Year's Day and will take up either, potentially Cheltenham.

"He is progressive and there is more improvement to come."

Champ (Nicky Henderson) is the red-hot 4/7 favourite with Paddy Power. The J P McManus-owned Champ was a dual G1 winner over hurdles last season and is a perfect two out of two over fences so far this season, most recently taking a G2 contest at Newbury on 29 November. Champ's closest rival in the market is Midnight Shadow (Sue Smith), who landed the G2 Dornan Engineering Relkeel Hurdle on this card in 2019.

There are 11 entries for the 2020 running of the £50,000 G2 Dornan Engineering Relkeel Hurdle (3.10pm, 2m 4f 56y). Among the entries is 2018 Magners Cheltenham Gold Cup runner-up Might Bite (Nicky Henderson). Might Bite, who will turn 11 on New Year's Day, has not raced over hurdles since the spring of 2016 and unseated Nico de Boinville at the fourth fence on his seasonal reappearance in the G2 Virgin Bet Price Boosts Many Clouds Chase at Aintree on 7 December. Henderson looks to hold a strong hand in the Dornan Engineering Relkeel Hurdle, where he could also be represented by Top Notch, successful last time out in the G2 Fitzdares Peterborough Chase at Huntingdon and William Henry, who defied 11st 10lb when taking the G3 Coral Cup at The Festival.

"Kalashnikov heads the market for what looks an ultra-competitive renewal of the Paddy Power Handicap Chase, while all eyes will be on the hugely-exciting Champ as he bids to make it three out of three over fences in the Paddy Power Broken Resolutions Already Dipper Novices' Chase.

"Might Bite has a couple of options and it will be interesting to see which way Nicky Henderson goes with the 2018 Cheltenham Gold Cup runner-up. He is the 9/2 favourite with us for the Paddy Power 68 Sleeps To Cheltenham Handicap Hurdle."

The going at Cheltenham is currently Soft. Conditions are forecast to be cloudy and dry going forward.

Under 18s go racing for free on New Year's Day. Club/Tattersalls Enclosure ticket holders will have access to a variety of complimentary entertainment in the Family Fun Zone, including exclusive appearances from Alex the Lion and Skipper the Penguin from the film Madagascar at intervals throughout the day.