Jockey Kevin Sexton landed his first ever victory at The Festival™ supporting WellChild with 33-1 chance Belfast Banter – then thanked his girlfriend for persuading him to return to racing two years ago. 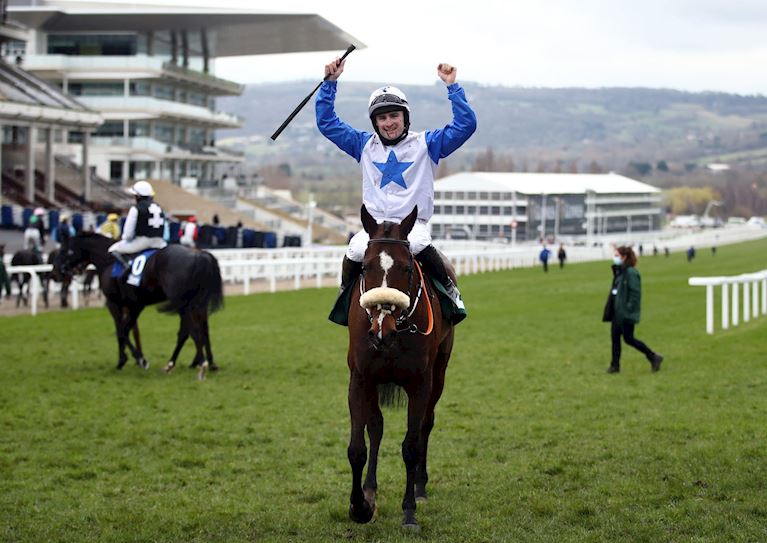 Speaking after victory in the McCoy Contractors Handicap County Handicap Hurdle, Sexton revealed he quit race riding and had planned to live in the USA until being talked out of it.

He said: “I am in shock here, to be honest. It still hasn’t sunk in. I couldn’t believe it when I pulled up. I finished second here a couple of years ago, beaten by one of my best friends in a photo-finish, and I never thought I’d get a chance like that again.

“Coming here yesterday and riding a favourite (Royal Kahala in the Parnell Properties Mares Novices’ Hurdle), I had very high hopes of her and she ran disappointingly, and I never thought it was going to happen for me. To come out and ride a winner less than 24 hours later is unbelievable.

“I have a bit of a love-hate relationship with this horse. He tends to finish second a lot, and he’s obviously been minding his mark for today! He had a light weight and we gave him a big chance first time in a handicap with a light weight, and I thought if he finished in the middle of them or in the first five I’d be delighted, and that’s  kind of the way Peter [Fahey] told me to ride him.

“But he did everything I asked of him and I got a nice run through for a County Hurdle -I’ve never ridden in one before, but from what I’ve heard they are very messy - and he just jumped and travelled, and kind of took me everywhere.

“I was planning on switching out coming down the hill to get a clear run, but I didn’t really get the chance - he was going so well that there wasn’t enough room to switch out, so I just tried to come down the middle of them. I was lucky enough that I never got stopped coming down the hill, and he stuck to it really well.

“I actually couldn’t believe it. I got quite emotional pulling up. I actually stopped riding two years ago because it just wasn’t happening for me, I had a couple of injuries and I got kind of into a low place, and if it wasn’t for my family, my girlfriend, friends and Peter, I wouldn’t be back riding. In my head I had given up. To be here riding a winner is unbelievable.

“I was persuaded to give it one last go, and I haven’t looked back since. Although I had given up, no one had given up on me, luckily enough. I actually had it in my head to go to America, just to get away from everything.

“Peter got me back and I was associated with Peregrine Run, on whom I won eight or nine races that year, and he put me back in love with racing. He was my first ride back, in a Grade Three, and he won and it got me rolling again without me even noticing."

In a separate interview the jockey told Racing TV: “He jumped and he travelled — he travelled better than he’s ever travelled, I think the drying ground helped him. He jumped brilliantly. Even the hurdles where I wanted him to pop, he was having a cut. He always wanted to go forward and it was just a matter of holding onto him for as long as I could.

“He needs to be delivered late. In the past he’s tended to have not found much off the bridle, but he had 10st today and to be fair to him when I gave him a squeeze, he picked up and galloped to the line.

“I never thought he was going to get in [to the race off the reserve list], if I’m being truthful I had all eyes on the mare yesterday and I thought I was going home without a winner. I thought if this lad finished in the middle, it would be great and to be honest it still hasn’t sunk in what he’s actually done.

“It’s unbelievable and to do it for Peter… I was actually a bit emotional afterwards. This time two years ago, I had given up riding. Things weren’t happening and I wasn’t happy. I had given up hope. If it wasn’t for my family, my friends, my girlfriend and Peter, I wouldn’t be here today.

“I hadn’t ridden for about a year, year-and-a-half, and I just wasn’t much good at anything else. Luckily people talked me out of it, good friends, my family and my girlfriend, and got me back on the right road. I love racing and I’m lucky enough now that I am making a living out of it.

“I’ve had 16 winners this season alone, I think I had 15 last year, so it’s been going better than I ever thought it would coming back and it’s all down to Peter and the team and his wife. It’s unbelievable to have that team behind me considering I had given up two years ago.

Trainer Peter Fahey, speaking from his base in County Kildare, said: “It was a race that we have had in the back of our mind for some time with him and we have been trying our best to get high enough in the weights all season.

“He is a strong traveller but he often doesn’t finish that well but today he pulled it out of the bag and it surprised me how he finished up the hill.

“When you look at his form he was a stone better off with some of them he had finished behind before. In fairness I was chatting to Ruby Walsh early on in the year and he said if he gets in to the County Hurdle it would be the ideal race for him as they often fall away.

“He ran well at Ascot behind Not So Sleepy and Ruby said it was a good run as it is hard to make up ground there.

“I’m delighted for his owner Fergal O’Neill and for everyone at the yard as we are a small enough team so to have a winner at Cheltenham is fantastic.

“Kevin is a huge part of our team as well and works hard every morning with us.  My wife Ber rides him out every day and does a lot of the work with him.

“We were at the track yesterday and she wanted us to stay. We didn’t think he would get in the race and we had a flight booked as I had a few bits and bobs with the horses to do so we stuck with our original plan to go home.

“Getting a Cheltenham Festival winner is something I’ve been chasing for a long time so I’m delighted but really I’m thrilled for everyone in the yard.

“We might try and find something at Punchestown for him. He is big enough to jump a fence as well so we are really looking forward to him.”

Emma Murray, groom of the winner told ITV Racing: “It’s brilliant for all the lads, I’m just absolutely delighted for Kevin and Peter - they really deserve it. There’s a great team at home as well, so fair play to them all.”

Lisa O’Neill, representing Denise Foster, the trainer of second Petit Mouchoir and fourth Éclair de Beaufeu said: “Petit Mouchoir has run a cracker with a heavy weight on his back and Jordan Gainford claiming 7lbs off him.

“I suppose we can’t forget he was fifth in a Champion Hurdle last year behind Epatante and third in an Arkle round here as well. He performed really well today and it’s good to see him come up the hill well. He’s been a fine servant for us and hopefully there’s plenty more left in him.”

“Eclair De Beaufeu has run well. He was running really well in this a couple of years ago when he was a casualty at the last, so he ran a cracker as well and we’re very happy with him.

“Saint D'oroux (15th) was a little bit disappointing, but we’ll take him home and see how he is tomorrow before seeing how the future lies for him.”

Jordan Gainford, rider of Petit Mouchoir, added: “An unbelievable run. His form round here is brilliant – a third and a fifth in the Champion Hurdle, a third in an Arkle – and he’s a lovely horse. I’m lucky enough to have been given the ride and take the 7 lb off him and I’m just delighted, he ran a cracker.

“He had plenty coming down the hill and battled tough all the way to the line. I’m getting some great opportunities and I’d just like to thank everyone, it’s been unbelievable.”

Neil Mulholland, trainer of third-placed Milkwood said: "With hindsight, I think Robbie (Dunne) wishes he’d held on to him a bit longer, but I’m happy with his run. We rode him a bit handier today and he settled well, so I was pleased about that, but something has struck into him and taken a hind shoe off.

“We’ll look now at the Scottish Champion Hurdle, where the track will suit him. He’s a smasher and he’ll jump a fence."