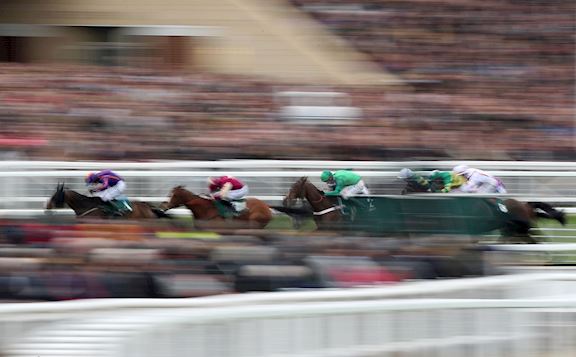 Additionally, the entries are also released for the £125,000 G2 National Hunt Chase (3m 5f 201y, Tuesday, 10 March), the first of three races at The Festival restricted to amateur jockeys.

Notebook has carried all before him in three starts this season, latterly defeating Fakir d'Oudairies (Joseph O'Brien IRE) in the G1 Racing Post Novice Chase at Leopardstown over Christmas.

Gloucestershire trainer Ben Pauling has high hopes for Global Citizen, after the eight-year-old repelled a strong field to win the G2 Wayward Lad Novices' at Kempton Park on 27 December.

Pauling said: "Global Citizen jumped well and won nicely at Kempton, and the plan now is to head straight to Cheltenham for the Arkle.

"He is at his best when he is fresh, so we will just keep him ticking over between now and then.

"I think spring ground and him being fresh will be to his advantage and I would be hopeful of an exciting performance from him in March."

Other Racing Post Arkle Novices' Chase entries to note are unbeaten chaser Brewin'upastorm (Olly Murphy) and the Willie Mullins-trained pair of Bapaume and Cash Back, both impressive winners at Naas on their latest starts.

Fellow Irish handler Matthew Smith is happy to keep his options open for stable star Ronald Pump, who is entered in both the RSA Insurance Novices' Chase and the National Hunt Chase.

The progressive seven-year-old made a sparkling chasing debut at Fairyhouse in November, when he defeated solid yardstick Captain CJ by eight lengths, and followed up with a second in the G1 Drinmore Novice Chase at the same track despite a significant mistake four fences from home.

Ronald Pump reverted to hurdles on his latest start when a fast-finishing second under a big weight in a Pertemps qualifier at Leopardstown on 28 December, a performance that prompted Smith to give him an entry in the G1 Stayers' Hurdle at The Festival.

Smith said: "Ronald Pump appears to be in great form and will run in the three-mile G3 novice chase at Naas on Sunday.

"I am waiting to see how he gets on at Naas before we decide what do at Cheltenham, as he will want to be going well there if he is to be running over fences at The Festival.

"The intention this season was always chasing, and when he won his beginners chase, he was absolutely brilliant. Then in the Drinmore I just was not 100 per cent happy with the way he jumped, even before the bad mistake.

"Robbie [Power] told me afterwards to target the race at Naas and said it would be no harm if there was a hurdle race for him at Christmas, just for a bit of confidence. He ran a great race there giving the winner two stone, and in another 20 yards probably would have caught him.

"To run like that off a mark of 145, I would not be afraid if we stayed over hurdles for the Pertemps or even the Stayers' Hurdle, as I thought that was a fair enough performance. But in an ideal world, you would like to be over fences as it's his only season as a novice. If he jumps on Sunday like he did first time out, I would be delighted.

"He has always shown us ability, but the main problem earlier in his career was that he was boiling over before his races. As he has got older, he has copped on, and I would say that is the main reason he has progressed like he has."

The RSA Insurance Novices' Chase was one of the most exciting races of The Festival in 2019 and the 53 entries for this year's edition include Champ (Nicky Henderson) and Slate House (Colin Tizzard).

There are a record 71 entries in the Marsh Novices' Chase, which will be run for the 10th time in 2020. Among the contenders is Samcro (Gordon Elliott), who finished second behind Faugheen in a G1 contest at Limerick last time out.

Willie Mullins has 12 entries as he chases a fifth victory in the race. They include Easy Game and Allaho, who were first and second in a beginners chase at Leopardstown over Christmas, plus G1-winning mare Laurina.

The home challenge includes Mister Fisher (Nicky Henderson) and Midnight Shadow (Sue Smith), who have both been successful over fences at Cheltenham this season.

Randox Health Grand National hero Tiger Roll captured the National Hunt Chase in 2017, while the 2016 renewal featured Native River who would go on to win the 2017 Cheltenham Gold Cup.