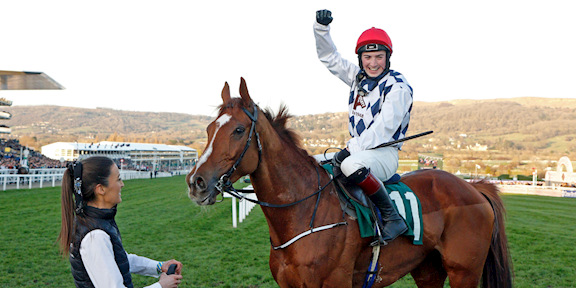 Banbridge (12-1) became a third Festival winner for trainer Joseph O’Brien when beating Cobblers Dream by a length and a half in the Martin Pipe Conditional Jockeys’ Handicap Hurdle (2m 4f 56y).

The six year old was a first Festival winner on his first ride in Britain for jockey Mark McDonagh.

He was a second winner of the week and seventh overall for owner Ronnie Bartlett, following Stattler in Tuesday’s National Hunt Chase.

He completed a clean sweep for Irish trainers on Day Four of The Festival, following five winners for Willie Mullins and one for Henry De Bromhead.

“The standing start actually suited us.  He was very sharp away, thank God, and I got a lovely position early. They didn’t go very quick and he was always in his comfort zone. To be fair to Mr O’Brien and Mr Bartlett, they kept it very simple for me - just to sit wherever he was comfortable and to hold on to him as long as I could. I’m just delighted that it paid off.

“There were loose horses coming out past me every few seconds and I thought, Jesus, what’s going on behind me? But I stayed out of trouble, thank God. It was ideal for the horse.

“I wasn’t confident that I would win until about 10 strides after the last. I was always just conscious that something might get to me, but luckily nothing did.

“It was unreal when I crossed the line. I’ve never witnessed anything like it before. I have ridden a few real nice winners this season,  but nothing comes close. Walking back in was class. I know half of the people have gone home, but this half are class! It was a great opportunity and thanks to everyone today who made it happen.

“I grew up on ponies, showjumped until I was 16 and wanted to go a bit quicker then. I started race-riding and just tried to work hard, working with Joseph while I was at college. My grandad Michael trains and his lads were great in starting me off, too.”

Mark gave Banbridge a great ride. Obviously there was plenty of carnage behind, but he managed to avoid some of the loose horses down the hill. He’s very tough, and I’m delighted for Ronnie (Bartlett), who has supported me very well.

It’s fantastic to  get a winner here. It’s been a long week, but the horses have all run well. We’ve hit the crossbar a few times and the filly (Scarlet And Dove) ran well in the Mares’ race. It’s great to be here competing, and great that the horses have been running well, but it’s a bit sweeter when you get a winner.

“It’s frustrating not to win of course, but he’s run very well. He’s been improving all season and it was probably a blessing that we didn’t get into the Coral Cup because the ground was bad. I think he’d go on most grounds and he’s run very well. We’ve just bumped into one but no surprise there.”

“It’s gutting to be second but he’s run an absolute blinder and I can’t fault the horse in any way. He’s jumped, he’s travelled and turning in he had every chance. He’s winged the last and we had a chance up the run-in before being beaten by another Irish one. He’s a cracking horse going forward though.

“It’s hard (keeping his weight down), but I love it. I’m doing something I love and I’m getting paid for it. The weight isn’t a problem at the minute and I said to myself that I would ride for as long as I can and for as long as I enjoy it. I’m making the most of it.”

He said: “He ran a cracker. The start wasn’t great as he shied away from the tape and I had to smuggle him into it the best I could to get him travelling. In fairness to him I was in top gear coming down the hill but he stuck on up the hill well. The ground is probably a bit on the tacky side for him but going forwards it is a cracking run and I’m sure there will be some nice horses come out of it. Look at last year what come out of the race with Galopin Des Champs and I’m sure Banbridge is a good horse as well.”

“I must admit coming down the hill I thought he lost his position a bit coming down the hill. He has jumped the second last and even coming around the bottom bend I thought this has not quite worked out. Once it fans it you get a better idea and I could see he was running on. Coming to the last we could be third here and he almost was. He has not been finishing his races but today he has had and that made a big difference.

“This year is a bonus season as he is a chaser all day long and we are looking forward to next season.

“This fellow is a three mile chaser. What we will do is go for the Red Mills final at the Punchestown Festival as he is qualified for that. I won that race last year with Suprise Package and it would be great to win it twice in two years and he would have a fantastic chance.”