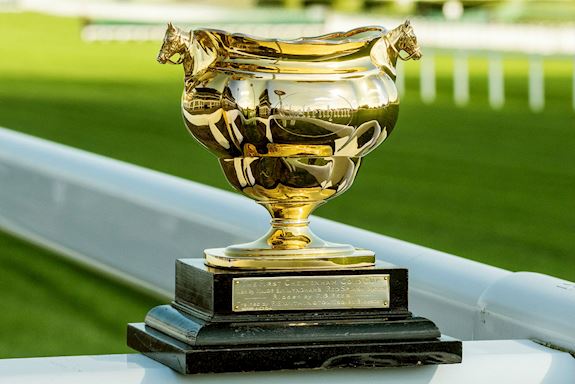 Wednesday, January 9, 2019 - There are a bumper 43 entries (the highest number since 2007) for the 2019 Magners Cheltenham Gold Cup, staged over an extended three and a quarter miles on the fourth and final day of The Festival™ presented by Magners, Gold Cup Day, Friday, March 15.

The entries include a record 24 from Ireland. With a prize fund of £625,000, the Magners Cheltenham Gold Cup is the richest non-handicap chase staged in Britain and sponsored by Magners for the first time in 2019.

Three of the last four winners of chasing's Blue Riband feature among the entries in 2019 - last year's hero Native River (Colin Tizzard), 2017 victor Sizing John (Jessica Harrington) and Coneygree (Mark Bradstock), who became the first novice to win the contest in 41 years when successful in 2015.

Native River gamely defeated Might Bite (Nicky Henderson) by four and a half lengths in 2018 after finishing third to the Irish-trained Sizing John the year before.

In two outings so far this season, Native River finished second in the G1 Betfair Chase at Haydock Park in November, going down by four lengths to Bristol De Mai (Nigel Twiston-Davies), and then came third behind Clan Des Obeaux (Paul Nicholls) and stablemate Thistlecrack in the G1 32Red King George VI Chase at Kempton Park on Boxing Day.

Native River and Thistlecrack, along with last month's G3 Coral Welsh Grand National hero Elegant Escape, are Colin Tizzard's three entries in the 2019 Magners Cheltenham Gold Cup. Joe Tizzard, assistant to his father who trains on the Dorset/Somerset border, reported: "Thistlecrack will go straight to the Gold Cup. He hasn't got there yet in his career, but he deserves to get there.

"With Native River, we haven't definitely decided, but quite possibly he will turn up in the Denman Chase (Newbury, February 9) and then on to the Gold Cup to defend his crown. We will see how he is in the next few weeks and make a decision off the back of that. It is usually a small field at Newbury but, more importantly, the timing is right as it is a month before Cheltenham. We were very pleased with him at Kempton as he stayed on really strongly. It was a good run given it was going right-handed and the track was against him. We were really pleased with both Native River and Thistlecrack at Kempton and they have both just been ticking along since. Elegant Escape also has an entry for the Gold Cup and that is almost certainly the way we will be looking, and hoping there will be a bit of cut in the ground. He will also have a Grand National entry. It is difficult to know what to do with Elegant Escape next. He is rated 159 now and needs to find a bit more to be competitive in a Gold Cup, but if we are going to have a big spring campaign with him and run in all the big Festivals, then it doesn't do them any harm to just freshen him up for a month after running in a Ladbrokes Trophy and a Welsh National."

Nigel Twiston-Davies, who landed the Magners Cheltenham Gold Cup in 2010 with Imperial Commander, reported: "Bristol De Mai is in good form at home.

"After his fall at Kempton, he was a bit bruised but not too bad and has been cantering away since. There is a possibility he could go to Haydock and run over hurdles in the Rendlesham Hurdle (3m, G2, February 16) to give him a confidence booster and then on to the Gold Cup. Cheltenham Trials Day (January 26) will probably come a bit too quickly and I am not sure about running in the Denman Chase either."

Currently heading the ante-post market for the Magners Cheltenham Gold Cup is Presenting Percy (Patrick Kelly), one of the record number of Irish-trained entries. Presenting Percy is seeking a three-timer at The Festival™ presented by Magners, having taken the Pertemps Network Final Handicap Hurdle in 2017 and the G1 RSA Novices' Chase in 2018. He has yet to start so far this season, with connections waiting for softer ground and the Galmoy Hurdle (January 24) at Gowran Park later this month could be his first run back.

The Magners Cheltenham Gold Cup is one of the few the races to have eluded Willie Mullins - he has saddled six seconds - but Ireland's champion Jump trainer has the most entries of any handler in 2019 with nine engaged. Among the Mullins-trained entries is G1 Savills Chase winner Kemboy, lightly-raced recent Listed scorer Al Boum Photo, 2018 G1 Punchestown Gold Cup winner Bellshill, last season G2 National Hunt Chase scorer Rathvinden and Total Recall, who took the valuable Ladbrokes Trophy at Newbury in 2017.

No current trainer has a better record in the Magners Cheltenham Gold Cup than Paul Nicholls, who has taken chasing's championship four times, thanks to See More Business (1999), Kauto Star (2007 & 2009) and Denman (2008). His four 2019 entries are headed by 32Red King George VI Chase winner Clan Des Obeaux and also include Cheltenham specialist Frodon, the lightly-raced Give Me A Copper and prolific winner Black Corton.

Champion British Jump trainer Nicky Henderson is responsible for three entries. In addition to Might Bite, Henderson has also put in Valtor, an impressive winner on his UK debut in a Listed handicap chase at Ascot in December, and Terrefort, runner-up in the 2018 JLT Novices' Chase before winning an Aintree G1.

There is a scratchings' deadline for the Magners Cheltenham Gold Cup on February 12, with the details revealed the following day. The six-day confirmations and £31,250 supplementary entry stage happen on March 9.

Grade 1, £625,000 Total Prize Fund. 3.30pm,Cheltenham, Friday, March 15, 2019. Three miles, two and a half furlongs (3m 2f 70y). For 5yo+ who are allotted a rating of 130 or more by the BHA Head of Handicapping following a review of the horses entered and after taking account of races run up to and including the day prior to confirmation. Horses who are not qualified for a rating in GB, IRE or FR may also be entered & such horses may be eligible providing the Handicapper is satisfied that the horse's racecourse performances up to and including the day prior to confirmation would merit a minimum rating of 130 (the decision of the BHA Head of Handicapping shall be final). Weights: 5yo 11st 8lb, 6yo+ 11st 10lb. Allowances: mares 7lb. Entries closed Tuesday, January 8, entries revealed Wednesday, January 9 (43 entries), scratchings' deadline Tuesday, February 12, £31,250 supplementary entry stage & six-day confirmation stage Saturday, March 9. Final 48-hour declaration stage, 10.00am, Wednesday, March 13. Maximum number of runners - 24.