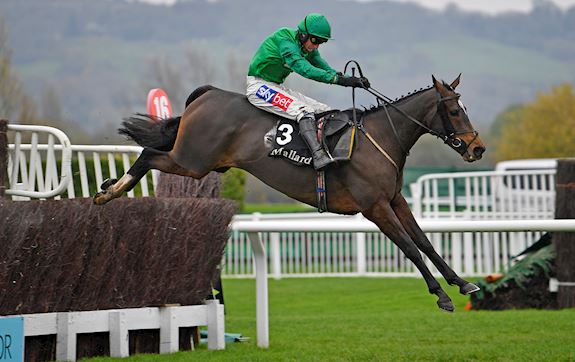 Top-class hurdler Wholestone is converting at least some of that talent to fences, as he proved when winning today's mallardjewellers.com Novices' Chase.

The Nigel Twiston-Davies-trained winner (13/8f), an eight-year-old gelding owned by Simon Munir and Isaac Souede, won by one and three-quarters of a length from Rockpoint (15/2), but he appeared to idle on the run-in and was value for a bigger margin.

Reflecting on Wholestone's recent defeat when second at The Showcase, the trainer said: "He is back on track now. It was a bit disappointing last time and it would have been nice to have had two winners with him here, but he's a lovely horse.

"He is still a work in progress and he was a bit keen out there today, but it's hard work in this ground. He was hopefully just idling and should have won a bit easier, but he likes a bit of help from other horses.

"We put him in cheekpieces for the first time because he hung to his left the last time he ran and today they appeared to help keep him straight. I'll chat to Daryl and see what he thinks. He was happy with the run.

"We'll look at ordinary novice chases for now - I don't know if there's a three-miles novices' chase at the next meeting."

When asked if the G1 Kauto Star Novices' Chase at Kempton's Christmas meeting was a possible target Twiston-Davies said: "The Festival is the long-term aim, but Kempton could be on his agenda. We'll look at it and have a word with the owners."

Jacob: 'Probably not one of my finest hours, but we got away with it'

Daryl Jacob admitted he was in front way too soon on Wholestone in the mallardjewellers.com Novices' Chase, but there was precious little he could have done about it and all ended well when the strong-travelling 13/8 favourite held on by a length and three-quarters from Rockpoint despite idling up the hill.

Jacob said: "It probably wasn't one of my finest hours in the saddle, but we got away with it. He's done a lot of things right today and was a lot more straightforward, but he was keen because we didn't go much of a gallop and every kind of gap that opened up in front of him he tried to go through.

"I was trying to restrain him, but coming down the hill I knew we hadn't gone that quick and the two in front weren't doing a whole lot in front, so I thought they would go along when we got to the bottom of the hill. I thought they would extend, but when I squeezed Wholestone to get him into the bridle he literally just shot through the gap and I was there a million miles too soon.

"He's a good horse, as he showed over hurdles, but jumping fences is definitely a lot harder for him than jumping hurdles and at Cheltenham last time he was left in front at the third and then got outstayed. He was a slow burner over hurdles, and he's getting the hang of this now and improving with every run. The cheekpieces sharpened him up today."

ROCKPOINT'S STAMINA HELPS HIM TO SECOND

Trainer Colin Tizzard suggested he might try some form of headgear on Rockpoint, who was well behind at one point in the three-mile mallardjewellers.com Novices' Chase but who rallied strongly to finish a fast-closing second to the winner, 13/8 favourite Wholestone.

Rockpoint, ridden by Robbie Power, was the runner-up by a length and three-quarters.

Tizzard said: "He went out of the picture on the telly at the top of the hill! But he's a strong stayer. I just think one day he's going to have to have something on his head, see if that doesn't help him to travel a bit better. Because if he travels a bit better he's going to be a lovely horse for the next two months on this heavy ground, when stamina is a forte.

"He'll be a Welsh National horse one day; heavy Chepstow ground would be right up his street.

"He needs to be driven. We'll start with little ones [headgear] first. After all, the winner had them and it made him travel. Watch him make up ground there when Robbie got busy on him - all it took was one slap."

The Colin Tizzard-trained Rockpoint (15/2) was a creditable length and three-quarter second in the £25,000 Mallardjewellers.com Novices' Chase to 13/8 favourite Wholestone.

Ridden by Robbie Power, Rockpoint made steady headway in the closing stages of the extended three-mile event to take second and Power was pleased with the performance.

Power said: "Rockpoint has run well. He warmed to the task the further they went.

"He got through the ground OK and it was a good effort.

"He looks like a horse who enjoys staying trips and hopefully there is more to come from him this season."