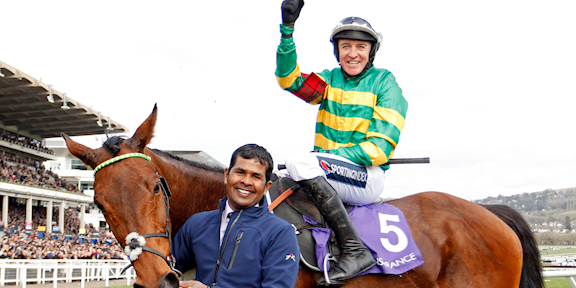 Brown Advisory to sponsor G1 novices’ chase at The Festival™

Tuesday, 9 February, 2021 – Brown Advisory and Merriebelle Stable are today announced as the new sponsor of the G1 Novices’ Chase, staged over three miles on day two of The Festival™, Wednesday, 17 March.

What is now “The Brown Advisory Novices’ Chase” was formerly known as ”The RSA Insurance Novices’ Chase,” having been backed by the RSA Insurance Group and its predecessors Sun Alliance and Royal & Sun Alliance since 1974. First run as the Broadway Novices’ Chase, the Brown Advisory Novices’ Chase boasts an outstanding roll of honour featuring the likes of Mandarin, Arkle, Ten Up, Master Smudge, Garrison Savannah, Looks Like Trouble, Denman and Lord Windermere – all subsequent winners of the Cheltenham Gold Cup. The 2020 renewal went to the J P McManus-owned Champ, trained by Nicky Henderson and ridden by Barry Geraghty.

Entries for the 2021 Brown Advisory Novices’ Chase closed on 19 January and are headed by the Willie Mullins-trained Monkfish, successful in the G1 Albert Bartlett Novices’ Hurdle at The Festival™ in 2020 and very impressive in winning his three starts over fences this season. Willie Mullins is the joint most successful trainer in the history of the Brown Advisory Novices’ Chase, having previously scored with Florida Pearl (1998), Rule Supreme (2004), Cooldine (2009) and Don Poli (2015).

Ian Renton, Regional Managing Director for The Jockey Club, commented: “We are very grateful to Brown Advisory and Merriebelle Stable for their continued and generous support at Cheltenham.

“The Brown Advisory Novices’ Chase is one of the three G1 novices’ chase at The Festival™ and even the quickest of glances at the roll of honour shows what an outstanding contest it is.

“Brown Advisory and Merriebelle Stable have been a pleasure to work with and we look forward to continuing our association with this exciting new sponsorship deal.”

Mike Hankin, President and CEO of Brown Advisory, commented: “Brown Advisory and Merriebelle Stable are thrilled and honoured to assume sponsorship of this historic race. In these challenging and uncertain times, we believe it’s important to reaffirm our support for an industry upon which many livelihoods and communities depend. We see no better place to do this than in this race, home to many storied horses—Arkle, Denman, Champ, and what looks to be another star in the making, Monkfish. We look forward to watching the action remotely this year, and in person next.”