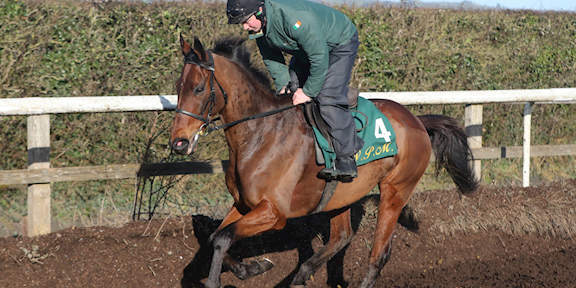 Willie Mullins admits it would be huge achievement if Chacun Pour Soi can complete his clean sweep of victories in the five championship races at The Festival™ supporting WellChild by striking gold in the Betway Queen Mother Champion Chase.

Having saddled winners in the Unibet Champion Hurdle, Paddy Power Stayers’ Hurdle, Ryanair Chase and WellChild Cheltenham Gold Cup, the prestigious two-mile Grade One is the only major race missing from the illustrious CV of the most successful trainer in Festival history. The closest Mullins has come to success is second place with Un de Sceaux (2016) and Min (2018).

However, the Closutton handler appears to have outstanding claims of setting the record straight this year with the lightly raced nine year old, who was forced to miss the race 12 months ago after suffering a late setback.

The Susannah Ricci-owned gelding is unbeaten in three starts this season, with his latest two victories coming at Grade One level at Leopardstown in the Paddy Power Rewards Club Chase in December and this month’s Ladbrokes Dublin Chase.

Mullins said: “It would be huge for the stable and everyone here to get that (Champion Chase) win and have all the Championship races at the Cheltenham Festival.

“When we started off we just wanted a runner and then a winner, not dreaming we could be in the position we’re in today, but it’s something we’ve been lucky with and I’d love to do it.

“Hopefully he will give us a chance to try and put that away. He’s in great form since Leopardstown and does everything right at home, so fingers crossed.

“It hurts, but at Cheltenham, every 35 minutes it’s a new page and you don’t really get to think about it or for it to sink in and thankfully we had a good Cheltenham last year so it’s history.

“It’s different if you had one horse, you would probably wallow in it, but as I said to the lads ‘just put it behind us and get on to the next race’.

“He’s like that. Dermot rides him and there’s never anything wrong with him, until the morning of the race last year. He had his troubles early on in his career but now everything has settled down he just goes up the gallop every morning and does his work.

“We want to get there and see what he can do at Cheltenham can he be as good as Leopardstown. He is one of the ones if you had to pick the top five or six travelling over, you’d say he is one that you are really hoping can bring his ‘A’ game there.”

Last year’s Champion Hurdle runner-up Sharjah will bid to put his defeat in the Irish equivalent on his last start at Leopardstown behind him by going one better to give Mullins a fifth victory in the race, and first since 2016.

He added: “I’m happy with him and maybe that race (Irish Champion Hurdle) just comes too soon for him after Christmas. It’s funny he’s done that twice.

“Patrick has his own way of riding him, he likes to sit and wait and he’ll probably do that. The better the ground the better the chance and if he can adjust his tactics a bit, it might make the difference.”

Dual Grade Three scorer James Du Berlais is on course to make his eagerly awaited debut for Mullins following his switch from the Robert Collet yard in France in the Grade One feature on March 16th.

He added: “He had a very busy season in France last year, and was bought by Simon (Munir) and Isaac (Soude) as a novice chaser, but it’s a long time to wait so we put him in training.

“I was delighted to see he’s rated 167 on English ratings, so that puts him in there with a shot. It’s going to be a true run race and that will suit.”

Although stablemate Saldier has beaten only one rival home in two starts this season Mullins is favouring an outing in the Champion Hurdle for the seven year old.

He added: “He’s another I entered in the County Hurdle this morning, but his aim all season has been the Champion Hurdle and both me and Rich (Ricci) would like to see him end up in there and we’re pressing every button to get him there.”

One horse who will be missing from Mullins’ Champion Hurdle contingent is last year’s impressive County Hurdle winner Saint Roi, who has met with a setback.

He added: “Unfortunately he is out of Cheltenham. Chatting to JP (McManus, owner) the other day we came to the conclusion we are not happy with him and he won’t run at Cheltenham.

“He just hasn’t gone forward and he has had one or two little niggles and JP was happy to let him get over those entirely.”

Multiple Grade One-winning chaser Kemboy, who holds entries in both the Ryanair Chase and WellChild Cheltenham Gold Cup, could bid to make it fifth time lucky at the Festival in the by reverting to smaller obstacles in the Paddy Power Stayers’ Hurdle.

He added: “We have to look at every option and I want to chat to connections, but we know he stays and hurdles are no problem to him, so he had to be entered anyhow.

Stablemate Bacardys, who finished third in the race 12 months ago on his third outing in the three mile Grade One prize, looks set to make a fourth appearance in the race.

Mullins added: “I just wonder if it is a shade too short for him, but there isn’t another race for him, but we would be delighted if he can be placed again.”

Mullins is likely to be triple handed in the Ryanair Chase on the same card by last year’s winner Min, ante-post favourite for the two and a half mile event Allaho and Festival regular Melon, who also holds an entry in the WellChild Gold Cup.

He said: “The three of them have similar tactics/methods of running which might backfire against us a little bit but at the moment I would say that’s their number one call unless we change at the last minute.

“I always thought Allaho was going to be a three mile out and out staying chaser the way he gallops and jumps, but his sire probably holds him back a little bit from having huge stamina, so he may just have a higher cruising speed at a shorter distance.

“He jumps very well and if you can match the two possibly over that shorter trip might suit him.

“Nothing has shown up with Min (after the Dublin Chase) and I’m not really worried. He just missed one fence down the back and took off too soon.

“Patrick did say he felt he wasn’t galloping and maybe the pace was too fast for him over that shorter trip and we shouldn’t have run him over the shorter trip – so once things weren’t happening we were happy to pull up.

“Looking at the re-run of the race at Christmas, I think Melon will probably have to end up there and we’ll have to adjust tactics for the day.

“We looked at Christmas and the race the other day and he doesn’t enjoy being held up. He much preferred what he was doing at Christmas (tracking the leaders) and possibly the trip was too long (last time) so that’s why we will probably go for the shorter trip.”