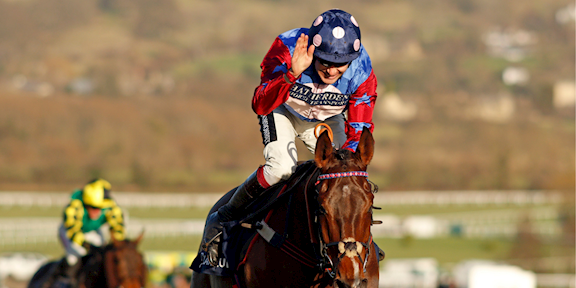 Paisley Park (5-1) won the Welsh Marches Stallions at Chapel Stud Cleeve Hurdle (3m) at Cheltenham today for the third time, adding to his 2019 and 2020 victories in the Grade Two contest.

The 10 year old’s third victory was achieved in the most remarkable of circumstances after he was reluctant to jump off with the other four runners, losing many valuable lengths at the start.

However, jockey Aidan Coleman did not give up and entering the home straight for the final time Paisley Park began to stay on resolutely. Hitting the front at the final flight, the Andrew Gemmell-owned gelding ran on strongly to go on and win by three and a quarter lengths from 8-15 market leader Champ.

Paisley Park’s success today equals the record of three victories in the Cleeve Hurdle set by Lady Rebecca (1999, 2000 and 2001), while the son of Oscar becomes the first triple winner of the race since it became a three-mile event in 2005.

Paddy Power reacted by making Paisley Park 7-1 (from 20-1) for the Grade One Paddy Power Stayers’ Hurdle at The Festival™, a race he won in 2019.

Successful trainer Emma Lavelle said: “It was really emotional with all the support we get from everybody for Paisley and what he has done for us.

“He came here in great order but I was worried about the ground and Andrew not being here today was just a sadness really. He will be very chirpy in his hospital bed. He wears his heart on his sleeve.

“Missing the start I was like ‘Oh My God’, but he was able to make that ground up and Aidan did that quietly, quietly and that was just vintage Paisley. He makes it hard to watch as so many people have rallied around him and supported him. We are so lucky to be a part of him.

“He is a special horse. I think we really missed this race last year with not being able to have that run before The Festival. I’m very happy with the fact we have done this and it’s all systems go now for The Festival.

“I was thinking gosh that is not ideal (at the start). We were just talking in the paddock and I wasn’t worried about him not jumping off. Cornelius (Lysaght) was there and we were just having a good old chat and suddenly it was like ‘Oh My God’. Fortunately they didn’t go off at a million miles an hour and he was able to make up that ground bit by bit.

“I loved the way he travelled all the way through the race. Aidan had him where he wanted him once we were back on the tail of them. He was never throughout the main body of the race doing anything other than travelling within himself. They’ve then quickened and I thought ‘uh-oh’ then the camera shot changes and you think we are here and he is coming.

“That is what he did and he galloped all the way up the hill. I’m afraid I lost a little at that point. There is nothing like having a winner at Cheltenham at any Cheltenham meeting with that walk in and that noise - that is what we have missed during Covid. Coming in here today it almost felt like The Festival with all the noise and the cheers. It means so much and I tried to convey that to everybody there. It means so much to all of us that have taken to him in the way that we have.

“We are so lucky to have him. He owes us nothing but he gives us so much. If there was ever a horse to be willed up the hill it is probably him. Aidan came into the paddock today and said this is his track and the one that works for him as they always get racing from quite a long way out and you have got to stay and that is his absolute forte.

“The ground is riding a little bit more testing than given. We thought it wasn’t going to be soft enough but it was still stamina sapping. That really was proper Paisley today and we’ve not seen that in a while. That was great.

“He has always shown us the same at home. I think the tongue tie has been a help and he has shown the same Paisley at home. The first run at Wetherby was not ideal and for the second run at Newbury we tried to change tactics and put the cheekpieces on which lit him up but he didn’t get home. Then Ascot was a big step in the right direction.

“Today was a good step again and hopefully he will keep going. Andrew is in hospital. He has just had a new valve fitted in his heart but he will be back for The Festival, don't you worry.”

Aidan Coleman added: “It’s a very special moment and I’m delighted with that. He’s a special horse and there’s not many more superlatives you can use. He’s a pleasure to be associated with and we’re delighted.

“That victory has got to rank right up there even with his Grade One wins. He’s just a very special horse. We always believed he still had that ability and the form was in the book, he’s placed every run he’s had this year.

“He goes to the Festival with a puncher’s chance. He always has a chance, especially on this track. Cheltenham is his track and we’ll enjoy today.”

Trainer Nicky Henderson said of runner-up Champ: “We just got a bit tired. I’d like to say this is trials day and not the day, but even so he just didn’t quite travel like he did at Ascot. We’ll regroup and it changes the plan, so we’ve got to look at things.

“One thing you have to say is that is a remarkable performance from Paisley Park and a fantastic training performance by Emma, so fair credit. To get him back is supreme and they deserve all the praise.”