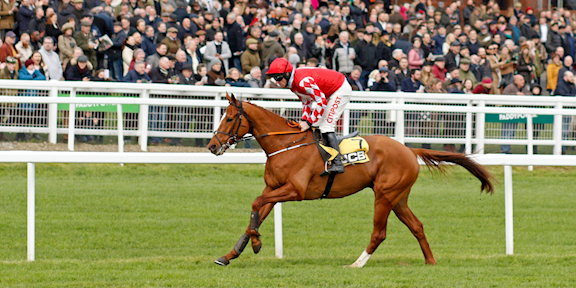 Pied Piper maintained his unbeaten record over hurdles and jumped to the head of the market for the Grade One JCB Triumph Hurdle at The Festival™ with a facile success in the Grade Two JCB Triumph Trial Juvenile Hurdle at Cheltenham today, Festival Trials Day.

Trained by Gordon Elliott and partnered by Davy Russell, Pied Piper travelled supremely well throughout today’s 2m 1f contest. He did not have to be asked any questions as he cantered into the lead approaching the final flight and came home as he liked to take the honours by nine lengths.

Bookmaker Paddy Power reacted by making Pied Piper the 5-2 Favourite (from 9-1) for the JCB Triumph Hurdle at The Festival. Fil D'Or, the firm’s previous market leader and a stable companion of today’s winner, was pushed out to 7-2 by the same firm,

Pied Piper, a son of New Approach, was bred by The Queen and won twice on the Flat in the Royal silks when trained by John and Thady Gosden before being sold for 225,000 at Tattersalls in the autumn of last year. He made a winning debut for current connections at Punchestown on New Year’s Eve.

Gordon Elliot said: “He is a nice horse. We came over to have a feel where we are.

“We thought if he behaved and settled he would go close but we wanted to see where we are. He probably surprised us a little bit but he jumped like a man and when he got close to one hurdle he learned to settle.

“He has always been nice to be fair and has always jumped very well. We got him as a horse to mix on the Flat and over jumps. He will be a nice horse to have in those staying Flat races. We might split them up (Pied Piper and Fil D’Or) but we might run them both in the Triumph and the Supreme Novices’ Hurdle. I’d say this would be a speedier horse than the other horse and the Friday track might suit Fil D’Or better. If one went to the Supreme, I’d say it would be this lad but there is also Aintree and other places.

“It is a nice problem to have but Cheltenham is a long way away and we are lucky to have two horses at the top of the betting for the Triumph Hurdle. Big thanks go to Mags O’Toole who picked the horse for me and recommended me to buy him. I rang Andrew and Gemma Brown and told them we have to have him and thankfully they brought him. They have got a few nice horses and he looks nice.

“They are big supporters of the yard and they are lovely people. They were supposed to come today but unfortunately couldn’t make it. It is great for them to have a Graded race winner around Cheltenham as that is what they came into the game for.”

Joey Morgan. Racing Manager to owners Andrew and Gemma Brown, who race under the Caldwell Construction Ltd banner, said: “The owners have only been in the game 18 months.

“They are based in the UK and are a very young couple and they really enjoy it. It’s brilliant and everything is working out. Hopefully, they will have six or seven runners coming over for The Festival.

“His work was very good at home and he won a good maiden at Punchestown and to be honest with you we were expecting a great run. There is a lot to look forward to hopefully.”

Three horses since 1990 have gone to land the JCB Triumph Hurdle after winning today’s contest, most recently Defi Du Seuil in 2017.

Johnny Burke, rider of runner-up Moka De Vassy (50-1), said: “He ran well and has out-run his odds massively but I rode him to do that.

“He’s still very green and is learning on the job but he stayed on well and looks a nice horse for the future in handicaps for an outfit that do very well. The yard (Jane Williams) have gone for the Fred Winter in the past so you never know – today was all about experience and he got that.”

Alan King, trainer of third-placed Forever William (12-1), said: “He’s run well and I think we need to go up in trip with him to two and a half miles now. There’s a couple of juvenile races coming up at Newbury and Ascot that I think we’ll look at next, but I’d say it’s unlikely we’ll be back here for The Festival as a consequence – he’d be out of his comfort zone totally I’d think.”

The opening SSS Super Alloys Handicap Hurdle (2m 1f) saw 9-2 Joint-Favourite Cormier come out on top. The Brian Ellison-trained six year old was making his first appearance since finishing down the field in the Grade Three Unibet Greatwood Handicap Hurdle at Cheltenham in November, when he lost any chance with a bad mistake four from home.

Several runners looked to hold a chance approaching the final flight but the winner pulled clear with eventual runner-up Severance on the run in. Severance proved a tough nut to track and it wasn’t until the final half-furlong that Cormier hit the front, going on to win by half a length.

A return to Cheltenham for the Grade Three McCoy Contractors County Handicap Hurdle at The Festival could now be on the agenda for Cormier, according to owner Dan Gilbert.

Gilbert said: “It is nice to get his head in front again. He was running well on the Flat but we dropped him in class a little bit as he had a tough race last time and he finished sore. It is hard to win these big handicaps and we always thought we would be competitive in them.

“Thirty grand is good prize money and it is nice to win a more winnable race with him as you spend years in those big handicaps and never win a race. The good thing is though you can finish sixth or seventh in one of those races as it you can then get a drop in the weights which helps you win a race like this. He has come down in the weights without doing much wrong this season.

“The first time he ran in the Greatwood (in 2020) was off the back of three runs so he was in at the deep end but the second time he would have gone quite close but he made a bad mistake four out. I asked Brian a couple of weeks ago how far off he was and he said he was ready to run so I said let’s run at Cheltenham.

“I live over the road by the roundabout by the way in. I walk over and I’m here in two minutes.

“I love coming here and it is good having runners here. I’ve had about 50 runners here and that is only my second winner here. I don’t bring them down for nothing as in my mind I always think they can win but it is such a hard place to win it just doesn’t happen very often.

“It is nice to have another winner here. We’ve got a restaurant meal booked at 6pm but we will probably all be tired by 8 or 9pm!

“He might creep into a County Hurdle and we will definitely enter him. There is the Morebattle Hurdle at Kelso which is worth a lot of money as well. This is a good stepping stone to that but we will probably run in both.

“I got to know Brian through someone called Kristian Strangeway. I go back with Brian quite a long way though as I had my first horse with him back in 2007. Brian is a good trainer and is very easy going.”

Successful jockey Johnny Burke said: “He’s just so honest. The race went smoothly apart from when we made one mistake at three out but he did the exact same in the Greatwood Hurdle in that he just snatched at it.

“Every time I asked him he was giving me a bit, he’s just a nice likeable horse and I’d say they’ll have plenty of fun with him and we’ll see where he ends up. He could end up back here for The Festival in March.”