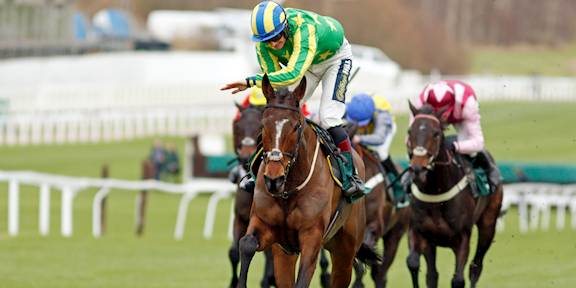 Trainer Nigel Twiston-Davies has saddled a winner at every Cheltenham meeting so far in the 2021/22 campaign with Torn And Frayed (5-1 Joint-Favourite) becoming the latest when successful in the Grade Three Paddy Power Cheltenham Countdown Podcast Handicap Chase (2m 4 ½f) today, Festival Trials Day.

Having been placed at both The Showcase and The International at Cheltenham earlier this season, the eight year old left a disappointing effort at Haydock Park last month well behind him today as he came home the impressive six-length victor under Sam Twiston-Davies.

Nigel Twiston-Davies said: “We brought him back on this better ground and we did think he would have a very good chance. The whole of my career has been about running novices in big handicaps and quite clearly it has worked. It is very important we win here. Most of our owners are local and we enjoy it.

“We had an owner who wanted to give up racing so he sold him to me and Caroline (Beresford-Wylie) came to me and said what have you got for sale and I sold him to her.

“It was a good job from the boy (Sam Twiston-Davies) but he thought we were in the wrong race as he thought we should go for the novice handicap chase. At Haydock it was so boggy he just didn’t go at all as there was nothing wrong with him afterwards.

“At the top of the hill when the others were massing around him I thought maybe we haven’t got such a chance but Sam kept a bit left so that was good. He is a novice without being tried too many times so he must have had a good chance.

“We will definitely have a look at a handicap at The Festival but the other thing is that we could possibly look at the Topham (over the Grand National fences at Aintree) as he jumps like a bunny. The owners have won that before with Irish Raptor.

“We try to have a winner at every meeting but you don’t expect to win these big handicaps every time but it is lovely when you do. If you finish second or third you have done a good job but to win them is great.”

Nick Williams, trainer of runner-up Galahad Quest (6-1), said: “It was a good solid run and he keeps getting better, so we’re very happy with that. We’ll have a think about next plans and all roads don’t necessarily lead back here in March, the jockey (David Noonan) was actually saying a flat track may be better.

“He’s won at Haydock and run well at Wetherby so he doesn’t have to come back here – there are other nice races around and we’ll look at things like Aintree and Newbury perhaps.”

Tracking the leaders and always travelling well, the eight year old made smooth headway to take the lead three fences from home and stayed on strongly to score by 10 lengths under Paddy Brennan.

O’Brien, who is based at Withington, said: “It’s great to get my 100th winner of the season for Ian (Robinson) and Imperial Racing, they’ve been great supporters of mine from day one and Ian has been such a good friend to me over the years so I’m absolutely delighted to get that.

“He got a nick at The Festival – he over-reached and struck into himself – so we were lucky that he didn’t do more damage really. His run at Newbury in November was crabbed at a little bit but he was beaten by a good mare of Paul Nicholls’ (Silver Forever).

“I was nervous coming up the hill there today because he did weaken so badly at Chepstow last time, but maybe the horse wasn’t quite right that day and he did the job today. Paddy gave him a great ride and he said he gave him a great feel so we’re delighted.

“We’ll look at something like the Paddy Power Plate Handicap Chase at the Cheltenham Festival but we’ll speak to the boys as there’s cleverer people than me that do the entries!

“We’ve always thought a lot of this lad and today was a great weight-carrying performance. He’s given some nice horses a lot of weight and I’ll speak to the lads and see where we go next. He hasn’t won many to be fair, he had one taken away from him here in the stewards’ room, but he’s always been pitched at the highest level and it’s great to see him get his big day in the sun because that’s what he deserves.

“We’ve had a couple of other years where we’ve come to The Festival with a bigger hand of chances but hopefully that changes over the next few years. We’ll just keep doing what we’re doing with the horses we’ve got and if we can give these guys a good day out that’s great.”

Ian Robinson, Racing Manager for owner Imperial Racing, added: “He has never been quite right this season but Fergal and his team have worked so hard. He had a lung infection the last day and he never really saw his race out.

“Stepping back to this trip has helped, as I think it is his trip, and so has the nice ground. Paddy believes in him as he has just shown.

“These colours around here when Paddy hits the front is the best feeling. I loved it. He will just get better now as we have found his trip and we have found the secret to him.

“Fergal has changed a lot at home in terms of bedding and everything and we have left no stone unturned. It is a brilliant training performance. It means such a lot to give Fergal his 100th winner of the season as we have been friends for so long. We will be partying tonight.

“Once he went clear I was still thinking he has one fence but you start thinking it through. This is Mecca for me. I came here as an 11 year old boy and ever since then it has been my Mecca. Every time I come my heart fills with joy. When you have got a runner here and you see that sort of performance it can’t get any better.

“I think what we will do is have a few drinks, apart from the trainer, who will be more sensible in the morning and have a look at something at that trip. We would look at the Turners Novices’ Chase and also the handicap option the Paddy Power Plate at The Festival. Let’s get him out sound tomorrow first then go from there.”