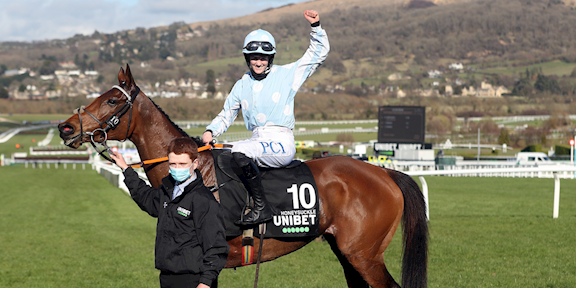 Rachael Blackmore has revealed that she is champing at the bit to get back to Cheltenham, with The Festival™ now less than three weeks away.

Blackmore enjoyed a week to remember at the meeting last year, becoming the first female jockey to be named as leading rider, before winning the Randox Grand National less than a month later on Minella Times.

And the 32 year old has revealed that she can’t wait to get back to Prestbury Park – as she bids to equal last year’s tally of six winners.

Speaking at an event organised by The Jockey Club at Punchestown Racecourse on Wednesday, she said: “I’m really looking forward to it and as the time gets a bit closer, you just can’t wait for things to kick off on Tuesday and we are really starting to get going now.

“I try not to get too wrapped up in all that, it’s massive to have the rides I do but I’m just trying to get one winner and whatever happens after that is a bonus.”

This year’s Festival is boosted by the return of crowds to the event and Blackmore revealed that she will be supported by a strong battalion of friends and family – who are set to travel over from Ireland.

She said: “My sister asked me for tickets for Thursday and Friday and when I asked how many she said 10 for each! She’s coming over with a battalion and my mum and dad will hopefully be over for a day as well.

“There’s plenty of racing before The Festival, but you’re just really looking forward to it and I’m in a very lucky position in that I’ve got lots of great horses to ride – so I can’t wait to get back to Cheltenham.”

Riders would be forgiven for treading carefully in the days and weeks leading up to big Festivals, but Blackmore stressed that she didn’t let that phase her and avoids doing anything differently to her normal routine in terms of both her diet and her mind-set as a professional athlete.

She said: “I’m very lucky with my diet in that my weight is good so I’m OK in that sense and I’m very lucky at this stage of my career now that I get to ride horses for 12 months of the year so I don’t have to change much of what I ride to be honest. Accidents can happen at any stage so I don’t change a whole lot to be honest and try and let these things creep up.

“As a jockey in general if you’re heading out in a race and thinking about what could go wrong or having a fall - it’s not a good mind frame to be in – so you don’t let it enter your mind.”

One of the very few blots on Blackmore’s copy last month came in the Cheltenham Gold Cup, when she was second on A Plus Tard behind stablemate Minella Indo.

A Plus Tard has since gone on to record a deeply impressive 22-length victory in the Grade One Betfair Chase at Haydock Park in November, but Blackmore stressed that no decisions had been made as to who she will partner in 2022.

She added: “I’m very lucky in the horses I have to ride for that week and the Gold Cup is obviously a race I got wrong last year but hopefully I can win it this time. I haven’t spoken to Henry (de Bromhead, trainer) and confirmed anything yet – we’re still three weeks away yet – but those conversations will happen.

“It doesn’t matter which race you’re in, you’re always a very lucky person if you get to walk into the winner’s enclosure at Cheltenham.”

One horse who Blackmore will definitely be riding is the unbeaten mare Honeysuckle, who is bidding to join a select group of horses to have won the Unibet Champion Hurdle more than once.

Victory for Henry de Bromhead’s mare signalled the start of the avalanche of winners for both him and Blackmore – and the jockey did not sugar coat just how big a moment that victory was 12 months ago.

She explained: “To get that victory on Honeysuckle on Day One last year was absolutely massive. To win a Champion Hurdle was such a pinnacle for me and it’s a great help when something like that happens on a Tuesday, it takes the pressure off for the rest of the week.

“Honeysuckle has never let me down to this day and I can’t see why this year would be any different.”

Another one of Blackmore’s key rides at this year’s Festival looks set to be the exciting Bob Olinger, who holds entries in both the Brown Advisory Novices’ Chase and the Turner Novices’ Chase.

Last year’s Ballymore Novices’ Hurdle hero has won both of his starts over fences so far and Blackmore – who missed his chasing debut last November due to being at Haydock Park - is looking forward to getting back in the saddle on the seven year old.

She said: “I’ve been extremely happy with him, obviously he’s got the two options and Henry will make the call on that, but I’ve been very happy with him. I think his jumping has been improving all the time and he’s a horse with a serious engine and one who I’m very lucky to ride.

“It was an incredible feeling last year, there’s not too many with an engine like him and I’m very lucky to be able to ride him.”

One jockey who missed last year’s Festival was Blackmore’s housemate Patrick Mullins, who was unable to travel over at the time due to being an amateur jockey.

Mullins has made up for lost time since returning to the saddle, racking up no less than four Grade One victories for his father and champion trainer Willie, and he reported the yard to be in fine fettle ahead of this year’s Festival.

He said: “The Dublin Racing Festival went really well and it provides a nice break before Cheltenham. The horses have come out of their races well and we’ve given them an easy time and we’ll start pressing some buttons now.

“We were late to start and there’s a few like Stat Man that I’d love to have had another run as experience can be a big help but most of them, even if they’ve had one run less, they’ve run well.

“It wasn’t easy last year but none of my potential rides won as it turned out – there were three seconds – which made things a bit easier to watch!

One race which is always worth watching out for Mullins Jr is the Grade One Wetherbys Champion Bumper, which he has won twice (Cousin Vinny in 2008 and Champagne Fever in 2012).

It is a race in which his father has an outstanding record, winning it on no less than 11 occasions, and there looks to be a particularly strong contingent heading over the Irish Sea for that race once again.

That contingent includes the current odds-on favourite Facile Vega, who is a son of six-time Cheltenham Festival winner Quevega and recorded a deeply impressive victory in Grade Two company at Leopardstown earlier this month.

Mullins was on board for that success and has first preference of his father’s string, though he stressed that such a choice may not be as easy as it first seems.

He said: “Facile Vega obviously has the best track form but Redemption Day mirrors everything he does at home and I think James’s Gate has a lot of improvement in him so there are plenty of good spares there.

“I think Willie’s record is usually that the favourite gets beat and one of the other ones comes and beats him! It would be nice to get a third victory in the race as I think Ruby (Walsh) has three so it would be great to equal him.

“It’s going to be an excellent race and Jamie (Codd) is unusually bullish about American Mike so it will be good to go head-to-head with him up the hill.”

When asked about how the family handles the pressure of big festivals, he added: “The Lord Bagenal (local pub) is definitely a huge help and we’re all very thankful that it’s back open!

“My father has been at that pinnacle now for a few years and I think my mother is very good at humouring him and we know when to walk out of the kitchen and when to be in the kitchen, so we’ve all adapted well I think.”

Also heading over the Irish Sea is Patrick’s cousin Danny Mullins, who is also enjoying a fine season in the saddle.

The 29 year old has won three races at the top level so far this term, including the Ladbrokes King George VI Chase at Kempton Park on Tornado Flyer.

“Crowds not being there didn’t take anything away from me personally last year but it will be fantastic to have that extra buzz back again this year.

“I’ve had a good few months and I just suppose I’m very lucky to be riding all those good horses and the harder I work, the luckier I get.

“There will be no conversations about rides, we turn up and work and Willie makes the decisions – that’s how it works! Hopefully there will be a few nice ones to get my leg across but we’ll see closer to the time.”

One horse which Mullins will be riding is Flooring Porter, who was an excellent winner of the Grade One Paddy Power Stayers’ Hurdle in 2021.

The seven year old was second behind Klassical Dream on his most recent start at Leopardstown in December and Mullins is looking forward to renewing rivalries in what looks a particularly open renewal.

He said: “I think he can do it again. It’s a very competitive race, you’ve got the likes of Champ, Paisley Park and Thyme Hill in there and who knows where Asterion Forlonge might turn up – but I definitely wouldn’t swap my lad for any of those. Klassical Dream disappointed last time at Gowran but if he bounces back he’s right in the mix as well, so it will be very competitive.

“It was a special day for me last year and the only shame was that the owners couldn’t be there to enjoy it but they thoroughly enjoyed looking in and they’ll be eagerly awaiting going over this year.”

Mullins regularly rides out at Closutton and when asked about his views on the huge match-up between Shishkin, Energumene and Chacun Pour Soi in the Grade One Betway Queen Mother Champion Chase, he was quick to make a case for the last-named and outsider of the trio at the time of writing.

He said: “Energumene and Shishkin put on a great show at Ascot and I suppose there’s this perception that Chacun Pour Soi doesn’t travel, but I don’t buy into that.

“He got I think a stone bruise the first time he went out and got beat a length or so in the Champion Chase and then they went no gallop last year. I don’t think he was right at Sandown last year and I think Chacun Pour Soi is right in the mix in that race.”