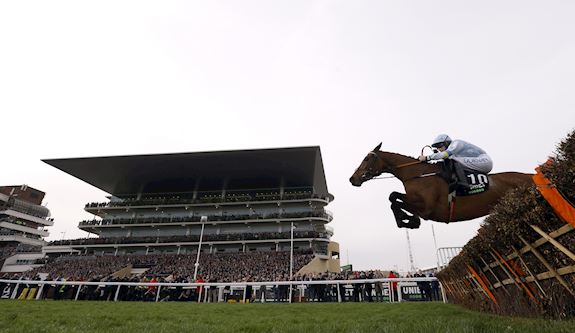 5 Things We Learned on Day One

Five things we learned on Day One of The Festival™

With course records being broken, history being made and TWO first Festival winners - Day One of The Festival™ certainly didn’t disappoint.  Here’s five things we learned…

Wellchild is the official partner of The Festival™ and on day one Smad Place was officially unveiled as the first equine ambassador to represent the Cheltenham-based national charity for seriously ill children.

15-year-old Smad Place took first place in the Cotswold Chase at Cheltenham in 2016. Today, the grey owned by Trish and Peter Andrews is enjoying his retirement with Sarah Haydon, who says he is her family’s pet.

WellChild chief executive Colin Dyer expressed his thanks to the racing world for their support of the charity, saying: “We are hugely grateful to everyone in racing from the owners, trainers and jockeys through to the racing fans for the support they are giving to seriously ill children and their families all across the UK.”

The five-year-old came home 22 lengths clear of stable companion Jonbon in a course record time of 3m 44.31s to hand trainer Nicky Henderson a 1-2 in the extended 2m contest.

That makes 71 victories at The Festival™ for trainer Nicky Henderson – the most successful British trainer of all time at the meeting. And it’s a fifth Supreme Novices’ Hurdle success for Henderson following River Ceiriog (1986), Flown (1992), Altior (2016) and Shishkin (2020).

Winning trainer Nicky Henderson said: “Jonbon is a very good horse - for Constitution Hill to do that to him is remarkable.

“It’s just nice to be back here with all these people who create that atmosphere - it means a lot.”

“For me it feels great - it feels like it’s been a long time coming, but it doesn’t matter how well you are doing in this game, it always feels like you are treading water, so I will enjoy the moment today and hopefully build on it and see what else we can do,” Cannon said.

The victory was trainer Alan King’s 16th Festival win, but his first since 2015 which he credited to Cannon’s “cracking ride”. It is King’s third success in the championship two-mile novices’ chase following Voy Por Ustedes (2006) and My Way De Solzen (2007).

A winner for Scotland in the Ultima

Corach Rambler came from a long way back to take the Ultima Handicap Chase for trainer Lucinda Russell. The 10-1 chance thundered home to take the honours by two and three quarters lengths from Gericault Roque. It was a second training success at The Festival™ for Russell and a first Festival victory for jockey Derek Fox.

Winning jockey Derek Fox said: “It’s lovely to win big races, especially somewhere like here - I’m over the moon. Lucinda and Scu are very good to me and give me loads of opportunities, so it’s nice to be able to repay them a small bit by winning races like this. I’m very lucky to be riding for them.”

Winning trainer Lucinda Russell said: “It was a super ride from Derek (Fox). After the false starts and stuff he was at the back and I turned to one of the owners and said we are going to have a vintage Derek Fox hold up ride and we did. It is funny as it kind of suits the horse as well as he loves coming through horses.”

Honeysuckle created history today by becoming the first mare to win the Grade One Unibet Champion Hurdle twice. Repeating her success of 2021, the eight-year-old was the three and half-length winner from Epatante, the 2020 winner. Zanahiyr was another length away in third.

Rachael Blackmore now has 10 victories at The Festival™ and it was a 16th Festival win for trainer Henry de Bromhead. She becomes the 25th Champion Hurdle winner to be trained in Ireland. Honeysuckle has now won all 15 of her starts under Rules and earned over £1million in prize money.

Winning jockey Rachael Blackmore said: “It was incredible, to be honest. Walking back down there, I’ve never felt an atmosphere like that.

“There wasn’t a moment’s silence. People here - it’s just an amazing crowd, amazing atmosphere. It’s easy to say that when you’re winning, but it’s a very special place and to hear those cheers was very special.”