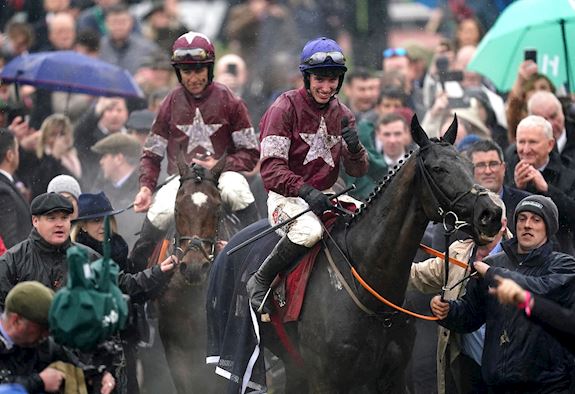 FIVE THINGS WE LEARNED ON DAY TWO OF THE FESTIVAL

The rain didn’t put a dampener on day two of The Festival™, with big upsets, first time winners and a final goodbye to a Festival favourite warming the hearts. Here’s five things we learned on day two at Cheltenham…

WET WEATHER NOT ENOUGH TO PUT OFF PUNTERS

It may have been a soggy day at The Festival™, but it didn’t dampen the spirits as thousands of racegoers braved the rain to witness a memorable day’s action.

Hats and umbrellas were the must-have accessories, while mud-spattered jockeys were cheered on by the crowds.

And while some of us were hoping for a drier day at the races, there were those who thoroughly enjoyed their day, despite the wet weather.

TV presenter Eamonn Holmes said: "I have a real connection with Cheltenham. I've been coming here for 35 years. My brother-in-law, who lives in Cheltenham and is from Northern Ireland, he is a real purveyor of horses. He's the one that understands everything. I just come along for the occasion. It's lovely, it's absolutely beautiful as an occasion. I think it's wonderful.

"Cheltenham is a great catch-up if you're into your horses, you're into fashion, being Irish. What a week. It's absolutely incredible. People are just so friendly.”

80 AND COUNTING FOR WILLIE MULLINS

The seven-year-old scored by three and a half lengths from Three Stripe Life, with Whatdeawant another nine lengths back in third.

Winning trainer Willie Mullins said: "It was a nice way to do it. I think Richard got the full pleasure out of it to be standing out on the wet lawn with the rain teeming down with his family. What better way to celebrate a Cheltenham winner.”

Successful Paul Townend was thrilled with his race saying “That was the best he’s ever jumped on the course, he has a brilliant jump in him… We love the rain!”

L’Homme Presse made it five wins from as many starts over fences when landing the Brown Advisory Novices’ Chase.

Winning jockey Charlie Deutsch said: “He just makes everything very easy. It didn’t feel like we were going quick - he got into a nice rhythm, I didn’t ask him too many questions, he just popped away because the ground was quite soft, then at the top of the hill I thought actually, I’m in a good position and I’ve got plenty of energy left and was still in front, so a good jump at the third-last and just popped the last two.

He also shared his admiration for L’Homme Presse saying: “He’s very efficient and he’s got scope if you need him long as well. He’s got everything and he oozes class - it makes my job really easy. I just love him to bits.”

Venetia Williams, the winning trainer said: “I’m going to need to watch it again to enjoy it properly, I think! I haven’t felt so sick in a race which is rare for me I have to admit. I’m really looking forward to watching it again. I can’t be more thrilled. He is such a spectacular jumper.”

And with this win under her belt, Williams was hopeful of more to come saying: “We can dream about anything now.”

Commander Of Fleet caused the biggest upset in Coral Cup history with owner Michael O’Leary admitting "A winner here is very hard to find – 50/1 winners are even harder to find.”

It was a first Festival victory for jockey Shane Fitzgerald, while trainer Gordon Elliott made it 33 Festival wins.

Jockey Shane Fitzgerald comes from Buttevant in Co Cork and having ridden at Cheltenham a few years ago as an amateur, his first ride at The Festival™ as a professional is one he will never forget.

He said: “From the start as a kid I’ve watched this and seen all the greats coming through, the likes of AP [McCoy] and Davy [Russell] - it’s class, and I’m riding against the likes of Davy now. It’s what dreams are made of.”

“It’s absolutely serious - the atmosphere around here… even to ride in the likes of here on an athlete of a horse is unbelievable. I can’t thank Gordon [Elliott] and Mr O’Leary enough for giving me the opportunities… It’s unbelievable.”

Delta Work may have won the Glenfarclas Cross Country Handicap Chase, but it was stable companion Tiger Roll that racegoers were cheering for as both horses entered the winner’s enclosure together.

It was an emotional day for Gordon Elliott, trainer of Delta Work and Tiger Roll who said: “Of course, I wanted the Tiger to win but once I’d won the race I didn’t mind as it was for Gigginstown who are massive supporters of us – and the reception he got when he came into the ring is what it’s all about.

“He’s been the horse of a lifetime and I’m very lucky to have had him – he goes back to Michael O’Leary’s now. He’s been with us for nine years now and to be honest I had a tear in my eye there, it’s unbelievable. If he’d have won it would have been special but he ran his heart out and we’re absolutely delighted.”