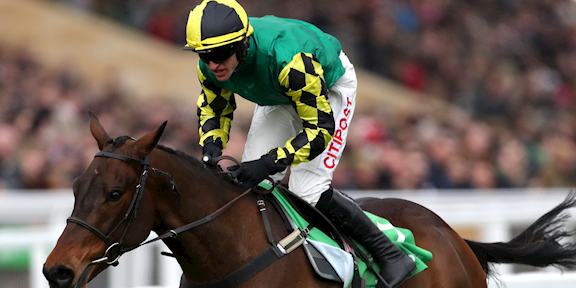 Lisnagar Oscar, one of the biggest priced winners at The Festival™ at Cheltenham in recent years, will bid to regain his Paddy Power Stayers’ Hurdle crown next Thursday (March 17th) in custom silks representing the national flag of Ukraine.

The Rebecca Curtis-trained gelding stunned racing fans by winning the Stayers’ Hurdle in 2020 at odds of 50-1. He failed to repeat the feat last year but his owners - The Racing For Fun syndicate – are hoping he can do them proud next week while also raising awareness and funds for the people of Ukraine.

The Jockey Club, which runs Cheltenham Racecourse, is supporting the charitable efforts of The British Red Cross in its response to the humanitarian crisis arising from the Russian invasion of Ukraine with a series of initiatives throughout The Festival and has made a donation of its own to the British Red Cross’s Ukraine Appeal.

One of those initiatives is the wearing of the custom silks in the blue and yellow of the Ukraine flag and follows a suggestion by racehorse owner Colin Peake, who was determined to raise awareness of the humanitarian crisis unravelling in Ukraine.

Peake explained: “Getting as much coverage as possible to highlight what is happening in Ukraine and getting people to put their hands in their pockets and support the humanitarian charitable efforts on the ground can only be a good thing.

“I thought to myself, ‘what better way to do it than have a horse running in the colours of the Ukraine national flag at Jump racing’s flagship event with all the coverage it receives?’ It’s all about getting the blue and yellow colours at the heart of the action.

“I got in contact with Allertons and they agreed to make a set of silks representing the flag of Ukraine at no cost and I then tried to find a horse that could wear them at The Festival.

“I know Rebecca Curtis well and Lisnagar Oscar had one of my own horses, Breaking Waves, in behind when winning at Chepstow three years ago. I’ve kept in contact with Rebecca and the owners ever since then and they were all very amenable to Lisnagar Oscar wearing them in the Stayers’ Hurdle.

“I am very grateful to them all. I must also extend my thanks to the British Horseracing Authority (BHA), who will not be applying the usual fee for a change of colours in this instance.”

Roy Hyde, one of the seven members of the Racing For Fun syndicate, added that he did not think twice about swapping the green, yellow and black silks Lisnagar Oscar usually runs in.

He said: “We are very happy that Lisnagar Oscar will run in colours of the Ukraine national flag next Thursday.

“It is a great idea and we are delighted to be able to show our support and raise awareness of the humanitarian charitable activities in Ukraine in this unique way.

“It may only be a grain of sand but if lots of these things keep happening then who knows what effect they will have?”

Despite not being able to follow up his 2020 success in last year’s Stayers’ Hurdle at The Festival, Hyde hopes he can be back on his A game after running well at the Home of Jump Racing when third in the Grade Two Welsh Marches Stallions At Chapel Stud Cleeve Hurdle on Festival Trials Day in January.

He went on: “He ran well last time out in the Cleeve Hurdle and Adam Wedge (jockey) said he is back to his best. The only place he seems to be able to win at is Cheltenham - he just comes alive there!

“He was going ever so well when he fell last year and it looks an open race this year. When he won in 2020 which actually thought he might win and it wasn’t a fluke as he had run well in the Cleeve that year too.

“We’re hopeful and it doesn’t look like there is total standout performer in the race. I think we are about 33-1 currently and I see someone has tipped him in the Racing Post, so who knows?”

Pembrokeshire-based trainer Rebecca Curtis added: “I think this is such a great idea and I am so pleased we are able to support it with Lisnagar Oscar wearing the Ukraine silks at Cheltenham next week.

“The horse showed he was coming back to his best last time out in the Cleeve Hurdle and has been in good form since. Adam Wedge will ride again.”

There will also be a bucket collection on Day One of The Festival and throughout the four days there will be big screen displays, tannoy announcements and adverts in the racecard explaining to racegoers how they can make a donation.

“I would like to congratulate everyone involved in arranging for Lisnagar Oscar to carry the Ukraine flag silks during next Thursday’s Paddy Power Stayers’ Hurdle.

“We’re doing everything we can to support the British Red Cross Ukraine Appeal next week and this initiative will raise further awareness and hopefully funds too. It’s yet another example of our sport coming together for a really important cause.”