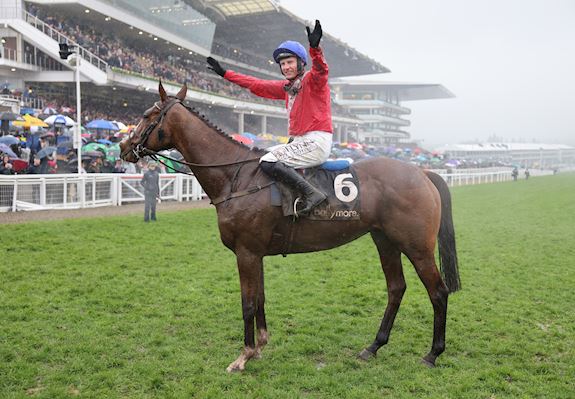 The seven year old scored by three and a half lengths from Three Stripe Life, with Whatdeawant another nine lengths back in third.

It is a 19th Festival win for jockey Paul Townend and an eighth for owner Cheveley Park Stud.

Returned the 8-11 Favourite, Sir Gerhard is the 19th market leader to prevail in 51 runnings of the Ballymore Novices' Hurdle,

Sir Gerhard was winning his second race at The Festival, having landed the Grade One Weatherbys Champion Bumper in 2021.

NB: The going was changed to SOFT all over ahead of the Ballymore Novices’ Hurdle.

“I was absolutely delighted with the horse. He was a little freer than I thought he would be, but there was probably very little pace and he was really lit underneath Paul [Townend] halfway down the back, but anyway, Paul kept enough in reserve and won as he liked.

“Yes, his jumping the second time [at Leopardstown on 6 February] concerned me a bit, but the first time out he was good and he was again today.

“Obviously you would think he’d be a chaser [in the future], So, he's left us in the dilemma next year whether to go novice chasing or maybe go back to the Champion Hurdle. That’s where we are.

"It was a nice way to do it. I think Richard got the full pleasure out of it to be standing out on the wet lawn with the rain teeming down with his family. What better way to celebrate a Cheltenham winner.”

“That was the best he’s ever jumped on the course, he has a brilliant jump in him.”

Townend said that “without a doubt” it is great to get a winner on the board, adding: “I wasn’t great company last night, put it that way! We love the rain!”

"My three sons went to watch outside and I thought I'd better go and watch with them and what better way to see a win. Who cares about the rain when you've won a race like that? Fantastic."

“He ran a cracker. Obviously, he enjoyed the step up in trip and we bridged the gap to Sir Gerhard a little more than he has done before. He’s an exciting horse but I think whatever he does over hurdles is a bonus and he’s a potential chaser in the making.”

“That was a great run, we just weren’t quite good enough to win it – the winner was very good.”

“The rain is starting to get into it now and that’s only the first race. That’s proper soft ground and there’s more falling all the time. It suited my fellow but any horses who want nicer ground might struggle.”