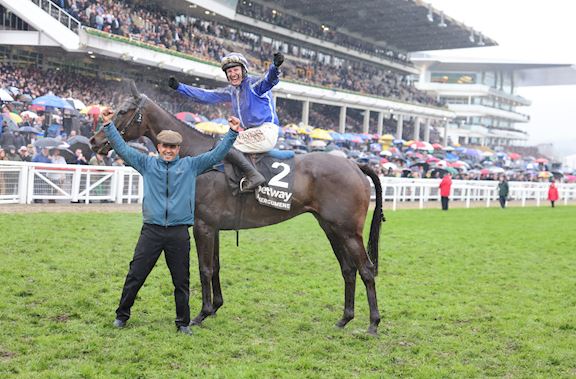 Willie Mullins saddles his 81st winner at The Festival as Energumene takes the Grade One Betway Champion Chase. It is the trainer’s first success in the two-mile chasing championship.

It is a 20th Festival success for jockey Paul Townend and third for owner Tony Bloom.

Shishkin, the 5-6 Favourite, was never travelling well and was pulled up by Nico de Boinville after the eighth fence.

“We just felt that we had completely the wrong tactics at Ascot. But today it wasn’t about tactics so much - Shishkin just didn’t handle that ground and Nico wisely pulled him up, and I was just very disappointed to see Chacun Pour Soir going out of the race early, but I could see Paul travelling and the horse loving conditions here. It probably suited him better. He’s got more speed than maybe we thought - at Ascot we thought after the race we should have waited, rather than play our cards early.

“That was the only plan I could think of. We had to change something and that was the plan, that we should follow Shishkin around, but then I got worried and said, Shishkin wasn’t travelling over the first two fences - Paul has to think about winning the race as well, when is he going to leave Shishkin and go and concentrate on the race? But Nico pulled up the other horse, so it was a bit of an ganticlimax. Still, from my point of view it was nerve-wracking. You could see he was travelling the whole way, though. It’s great for Paul, and great for Tony Bloom.

“I was really disappointed about Chacun Pour Soir. I didn’t really see what happened because I had just taken my eyes haway from him to look at another horse. I thought he was absolutely loving it out there, so it is frustrating. I am of course delighted to win this race; I haven’t done things as dramatically as Henry [de Bromhead] did last year, but yes, we’re getting there!”

Paul Townend: “It was a headache first trying to pick which one to ride, and it was hard to get off Chacun - I love Chacun Pour Soir, but I love the two horses and it was a really hard decision. We went through tactics a lot at home - everyone had a bit of an input and I was trying to get everyone’s opinion on it, so it’s brilliant when it works out.

“I went out to ride a race,and over the first two I could see Nico trying to get a bit closer and I was watching to see what was happening, watching his body language, and I had to make the decision then to go after the race as well, and it was clear that Nico wasn’t going on. I just had to ride my own race after that and I probably ended up riding three or four different races, but it worked in the end.

“He jumped so well, he got me into the race and I could fill up everywhere. It just worked out for him. The decs were done before the rain came, but I had my waterproofs ready for riding this morning and I was just sorry I didn't get to put them on! But the ground is loose, they are getting through the ground, and they are National Hunt horses.

“He is top-class, I think. I thought to be involved in the race at Ascot was exceptional, bar the result on our behalf, but they are two proper horses and they will meet again. For now, though, it’s magic.

“Riding a Champion Chase winner for Willie - Ruby [Walsh] didn’t leave many behind him but we are glad to pick up what scraps he left! We were out of luck yesterday but in luck yesterday, so that’s all right and everyone’s in one piece.

“Every day’s a school day [referring to Ascot] and there’s no point getting older if you don’t get wiser.”

“I believe in Willie and Paul Townend, who rode a magnificent race and the rain really helped us. We were praying for rain. We're all getting very wet, but we're delighted to be wet. He's an amazing horse. We were very confident going in, and he's won the Champion Chase. It's brilliant.

“We were very excited. Obviously Shishkin pulled up, that made it a lot easier for us, but full credit to Energumene. An amazing horse. It's brilliant. We're having a great time.”

“It’s been a great day and for a moment I thought I might be winning the Champion Chase as well as the Brown Advisory. He’s run really well. I didn’t think he’d like the softer conditions, but he’s handled them and is a gem of a horse. The better the race the better he runs.

“Venetia has been crucial to my whole life and career, and she stood by me when others might not have done. Loyalty is everything isn’t it.

“Happy days. I’m thrilled to bits. He’s come a long way. I couldn’t win a hurdle race with him, and I’m not sure I could now even as it’s his jumping that’s so brilliant.

“And he’s only a pony. I wasn’t sure about this ground for him, but he didn’t mind it did he?”

“We’re delighted with the run. Just the way his wind is, he probably struggles on that heavy ground. I’m hoping he can be very competitive on better ground now so we are really happy. He hasn’t been busy, so we’ll see about another run.”

“He ran well and we’re very happy with the run.”

“I’m delighted with that and he’s run really well. He hasn’t quite got the legs of the others now when coming down the hill but he enjoyed it as he knew it would. He’s been a brilliant servant for us – he’s won over a million quid and won the Champion Chase so we’re really proud of him.

“I’m really emotional to hear that applause from the crowd for him, it just shows what a wonderful horse he’s been and it’s great to see people have enjoyed him. He’s run at seven Festivals and he’s won the Champion Chase, he always gives his best and is an amazing horse. It was a special day when he won the Champion Chase here, but he’s also won two Tingle Creeks and a Grade One at Aintree so he’s been a smashing horse for the Hales family. He goes out at the top and he’ll join Big Bucks in retirement. He’s going to have a wonderful home.”

“That was a great run and he’s been a fantastic servant. He’s done six or seven Festivals now and he’s been a phenomenal horse for me, he got my career going when we won the Tingle Creek when I was 18 or 19 so I’m delighted he’s going out here at Cheltenham and even happier he does with a place. He gave me a great spin and I’m just delighted he’s going out in one piece.”

“To be honest with you, you could nearly tell going to the first fence that he wasn't where he wanted to be and I knew why. He just couldn't get out of it [the ground]. We are in very extreme ground. And yes, he's won in soft ground. But you're going round in heavy ground, and that is not his scene obviously.

“Yes, they've put some water on it, because the boys thought last night coming down the hill, which is always a dangerous sort of place to be, was getting quick, and if they say that, you've got to act accordingly. Now the forecast obviously didn't predict what we've had, [it said] there were [going to be] showers around, but we weren't predicted this.

“So no, I'm not shouting and screaming. They've done their best. They took a decision and it is what it is, and there's no point in crying about it or shouting about it. I'm not blaming anybody, that's for certain.”