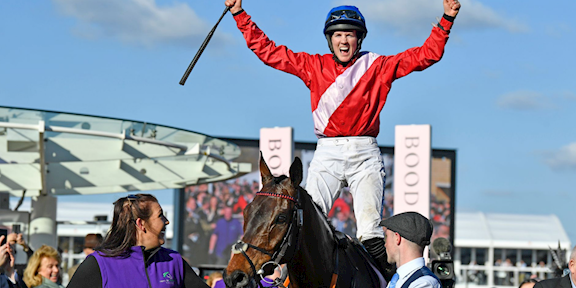 Rachael Blackmore, who became the first female jockey to win the Boodles Cheltenham Gold Cup on A Plus Tard, said:

“I suppose I didn’t want to do the same thing as last year as it didn’t work. The wall of horses in front of me think made sure I didn’t get there too soon. He felt very happy throughout the race this year and jumped fantastically, and I was able to take him back a little bit everywhere.

“Thankfully he was just good over the last two and he picked up incredibly over the last. It is an incredible feeling when you do that over the back of the last at Cheltenham. I was happy if I was going to get beaten for doing something different as opposed to being in the position I was in last year as that definitely didn’t work. I was taking my luck and we got the split.

“It is just incredible. He is a classy Leopardstown winner over two miles so he has plenty of pace. Everyone has been happy with him since he came back in this season. He is a very talented horse and I’m very lucky to be on him. Cheltenham is such a special place, but it is so special because of the atmosphere and the people.

“To have that roar back and to get to walk back in when you can’t see space and you can just see bodies is just incredible. It is the closest thing to feeling like a rockstar you will ever feel without being able to sing. It is just incredible to have people back and I feel very, very lucky.

“I just knew coming down to the last this year that I had more horse underneath me and that is a great feeling but you still have to get over the last. When I landed I gave him a squeeze and he picked up and I knew I was going to gallop all the way to the line but you don’t truly believe it until you cross the line. It takes about 10 strides after the line before you realise it but it is incredible and I’m very lucky to be getting to ride these kind of horses. Henry is just an incredible trainer and he has had another one-two in the Gold Cup that is just incredible.

“I’m so lucky I can’t believe it is not even 12 months since the Grand National happened and what with Honeysuckle this week winning her Champion Hurdle I wish I had better English to describe how I feel to be honest as it is very overwhelming.

“It has not quite been every day (that I thought of last year’s defeat) but it is definitely in the back of your mind as this is what the whole week is about for I suppose. You think about what might happen and most the time what you want to happen doesn’t.

“When I turned professional and my ambition in doing that was to ride out my 7lb claim as I could never see myself doing that as an amateur. I suppose things have escalated dramatically from that but Shark (Hanlon) was incredible to help me and as a conditional.

“Eddie O’Leary got me into Henry’s and my career has gone to a whole new level being associated with his yard. He is incredible and he has incredible staff. It has been brilliant.

“I was never worried about A Plus Tard’s stamina and him not staying I was just conscious not to use up his speed like I did last year. His stamina wasn’t the worry the ride I was going to give him was the worry.

“It’s incredible to be involved and I’m just delighted for her (Rachael Blackmore), she’s just a savage rider and we’re just so lucky to have her.

“To be honest I didn’t question any of it too much (last year), but Rachael said to me about three weeks ago that she was kicking herself and she wanted to ride him to use his pace. I said to her to do whatever she wanted, and she started banging on about what she was doing as we were about to leg her up and I just said, ‘you’re the boss’! That was is and coming down the hill and I thought she was very brave and brilliant - it was an incredible ride.

“I’d need to see it again, but just to see him powering up the hill was incredible.

“It’s been a ridiculous year. Everyone’s been telling me how bad my horses are going, so we’ve had a few bad months as well! Even a couple of runners this week have made me wonder if there’s a problem, but then you see Honey and this guy – they were unreal.

“It’s amazing and I’d love to let myself enjoy it more. One thing I have to say is to get the roar this year is fantastic. It was amazing to win it last year but with the crowd here it’s just a different league.”

“She’s extremely professional and works really hard. If a mistake is made learns from it and rectifies it straight away and she’s just a real pleasure to work with. She’s a great person and apart from all that she’s a brilliant rider. She’s very composed and very professional, so she’s just a joy to work with. Everyone loves her in the yard and she just does things that you don’t see everyone doing.

“She’s got a huge amount of ability and is just a savage rider and a great horsewoman. She’s not hard on horses if she feels they’re beaten and she’s always thinking about the next day and she makes them want to run for her. The other day she was schooling Honey over hurdles out in the field, she jumped brilliant and before she even went to pull up she was giving her big pats down the neck. She’s just a real horsewoman and she’s incredible.”