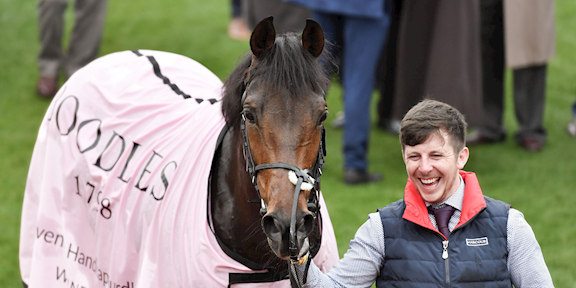 Owner JP McManus enjoyed a 68th winner at The Festival and his first of 2022 when Brazil landed the Boodles Juvenile Handicap Hurdle. McManus is the most successful owner of all-time at The Festival.

It WAS a first winner in the UK for trainer Padraig Roche with his first ever UK runner. His father Christy rode the 1984 Derby winner Secreto and saddled three winners at The Festival.

It was a sixth Festival winner for jockey Mark Walsh.

A full-brother to 2017 St Leger winner Capri, 10-1 chance Brazil got the better of 13-8 Favourite Gaelic Warrior by a short-head.

“It’s unbelievable, I’m so lucky to have a horse like him. JP and Noreen (McManus) are very good friends with my mum and dad and for them to give me a horse like that was unbelievable and it’s paid off so I’m absolutely over the moon.

“We thought he’d run well coming into today. He was improving with every run so we were hopeful but to go and win was just amazing. We knew he’d stay after jumping the last and he got his head in-front at the right time. This is my fourth year training and I’ve only got a handful of horses at home so it’s just unbelievable to have a winner here. I’m lucky to have good staff and to get it with a horse like him is extra special.”

“Paul [Townend]’s horse kept jumping right and was actually interfering with me a little bit at the second-last and I was having to pull and kick to get down his inner, because I knew my horse would stay all day, and the line came in time for us. At the second hurdle Paul’s jumped out and squashed me, and I lost a bit of ground, but we weren’t going much of a gallop so I could get back into position alright.

“Down at the start everyone wanted to make it,  but when we jumped off nothing seemed to go on, so we were just hacking up the straight the first time, and we were actually hacking most of the way. I knew my fella stays so I sent him on down the hill to the third-last because I didn’t want it to be a sprint - I wanted it to be a proper staying race from there, and it ended up being that.

“He’s had four runs before day so he knows what he’s doing. Padraig [Roche] had him in brilliant condition. I’m delighted for him - he’s a friend of mine and we grew up together, so I’d delighted to give him his first Festival winner. It’s his first runner here so he’s got 100% record so far! And it is very important that it is for Mr McManus, who is such a huge supporter of racing. It’s just great to get a winner on the first day. If you get one winner, it’s great.”

“He ran a great race and he had every chance. On the whole he jumped well. We would have probably liked a bit more juice in the ground. He is a nice prospect for next season. It didn’t help him how he jumped the last but that is racing. There was only a short head in it and you can if an and all day but he ran a great race. I hope there will be plenty of good days with him as he is a real jumping type. We will stay novice hurdling next season as he is still a maiden and he will be back here for the Ballymore next year.”

“We thought he would run well. Harry (Cobden) said he didn’t come down the hill and that he got a bit lost. He has turned into the straight and took off and has stayed on strongly. We will find a nice race for him before the end of the season before he heads off to Australia. The guy who owns him is Australian and he is going to send him back over there to run on the flat. He bought him to run in this then once more before going off to Australia. It was a nice run.”