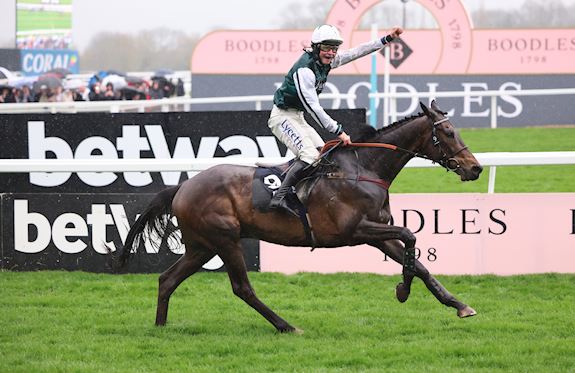 L’Homme Presse made it five wins from as many starts over fences when landing the Grade One Brown Advisory Novices’ Chase (3m 80y).

The seven year old defeated Ahoy Senor by three and a half lengths with Gaillard Du Mesnil a further length and three quarters away in third.

It was a first Festival victory for jockey Charlue Deutsch.

It is a seventh Festival victory for trainer Venetia Williams.

Returned at 11-4, L’Homme Presse is the 23rd favourite to score in 78 runnings of the Brown Advisory Novices’ Chase.

“He just makes everything very easy. It didn’t feel like we were going quick - he got into a nice rhythm, I didn’t ask him too many questions, he just popped away because the ground was quite soft, then at the top of the hill I thought actually, I’m in a good position and I’ve got plenty of energy left and was still in front, so a good jump at the third-last and just popped the last two. He’s done it all quite easily - up the straight he was having a good look around and I probably didn’t need to give him a smack, but he was looking around a bit at the noise of the crowd. No, he’s a wonderful horse and I’m very lucky.

“I presumed Ahoy Senor would be in front because he’s a good, strong traveller and I thought I’d just take a lead off him, but with him jumping out to the right, I was very conscious of staying wide of him, and Davy Russell [on Farouk D’Alene] probably wasn’t very happy on my outside,  but I was very conscious of staying wide of him so I didn’t get taken out or anything silly, and stayed wide so if he did come across I had plenty of room. Then when the time was right my lad took me past him, and then it was all quite straightforward and we could just concentrate on jumping and travelling and then wind it up down the hill. It was great, and plenty of mud about - a proper jumping day, isn’t it?

“He’s very efficient and he’s got scope if you need him long as well. He’s got everything and he oozes class - it makes my job really easy. I just love him to bits.

“Stamina is always an unknown. I was always confident he would be a three-miler but with the rain coming I thought, oh crikey, I hope we’ve made the right decision, but he’s stayed all day and just made it all easy. He’s just a wonderful horse with a brilliant brain. It’s just great to come across one like him, and it's all thanks to Andy, the owner, and Mr Pink and Venetia, really. They’ve brought him here and I’m lucky enough to ride him. It’s a dream come true.

“I think yes, he could be a Gold Cup horse off the back of that, definitely.

“This last month hasn’t gone as well as the others this season and you start asking yourself questions, but as long as you’ve got the good horses, like this lad… Yes, this really tops it off. I said going into the week that if we could get a Cheltenham Festival winner it would make the season, and it has. I’m pinching myself, really.”

“He has been absolutely fantastic. All credit to Andy (Edwards, owner) who picked him out and has seen him right the way through to here. I’m just thrilled and honoured to have been the custodian of him.

“I’m going to need to watch it again to enjoy it properly, I think! I haven’t felt so sick in a race whaich is rare for me I have to admit. I’m really looking forward to watching it again. I can’t be more thrilled. He is such a spectacular jumper.

“I know he ended up being favourite but it was lovely to hear the crowd cheer every time he put in one of his spectacular leaps.

“To be honest we have been thinking this is the most likely race from early days. The only way we would have gone shorter is if we got proper heavy ground but that was so unlikely. This rain has made it soft ground but not tiring ground.

“Andy was recommended him when he had two runs in France and he had ended up with a tendon injury. He was damaged goods at that point but most tendon injuries if you do the right thing and give them time you can get them back.

“He joined me just after a year after his tendon injury and. He joined us in the September and he didn’t have his first run for us until Grand National day.

“It was a long played out story but here we are. The first season we had him it probably wasn’t until three weeks before he ran at Chepstow in a novice hurdle that he really looked like he had much action. He didn’t look the fleetest of foot at that stage, but he has just gone on and improved and improved. He is a big horse and always looked like he was going to be a chaser.

“What a fabulous ride Charlie gave him, he did everything right. He took up the running when he needed to. We can dream about anything now.”

“After the second fence and Peter (Pink) turned to me and said is he going alright and I said perfect. Then he started winging them. Every time Ahoy Senor jumped he was jumping from a length behind to levels. As long as he got over safely he was going to win from a long way out.

“I was just really relaxed and calm until the last then three years of emotions burst out. About 10 lengths from the line I burst into tears.

“This morning at breakfast I got the video out when I picked him out in Normandy and he was gangly and didn’t know where he was. He had two months box rest and I picked him up to bring him back to England and it has been one emotional journey. I can’t explain how emotional it has been.

“Felix de Giles did tell me he was very good and that they thought the world of him and then he got his leg and it allowed me to step in and nab him. It has been a long road hence why I took him to Venetia as she was going to be as patient as I am. She is the best trainer of chaser in this country for a long time.

“This rain was perfect. I’ve been really relaxed. This is liquid sunshine for us it is absolutely perfect. Back him now for the Gold Cup why wouldn’t you as he was still going away up the hill in this ground and he will be stronger next year. I’ve never dreamed of having a Gold Cup horse as I’ve never been big headed but let’s enjoy today.”

“We’re totally proud of him. He’s grown up today in that he’s always won his races by jumping his fences better than anybody else while today he had to knuckle down and be a racehorse. He made a mistake along the way and the ground is probably not perfect for him but no excuses and he’s a lovely horse. We can’t wait for next year. L'Homme Presse is a good horse and has obviously enjoyed the ground and I’m delighted for Venetia – we’re good mates.”

“He travelled very well and just made a little mistake at the third last. That got me off the bridle, but he’s galloped to the line and we’re very happy with him.”

“It was a tough race for them but Gaillard Du Mesnil ran a cracker. Mark (Walsh) said Capodanno made a mistake early and then he couldn’t get him in the right rhythm, especially with all of that muck coming back at him.”