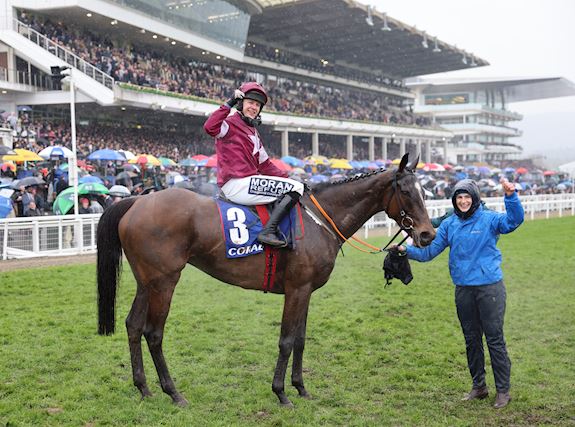 Commander Of Fleet causes the biggest upset ever seen in the Grade Three Coral Cup Handicap Hurdle when scoring at 50-1.

It is first Festival victory for jockey Shane Fitzgerald.

For trainer Gordon Elliott it is a 33rd Festival victory and for owner Gigginstown House Stud it is a 31st Festival success.

It is a 1-2-3 for Ireland as Commander Of Fleet sees off Fastorslow by a short head with another five and a half lengths back to Ashdale Bob in third.

“I’d say the conditions suited him on the day as he loves very soft ground and that probably went against a lot of the other horses in the race.

“Michael and Eddie have been very big supporters of mine so to train a winner for them at Cheltenham this year is very special. Cheltenham has been a lucky place to me. I love training winners and to be training winners in front of everyone is great. I’d like to thank all my owners and hopefully it is now onwards and upwards. We’ve been hitting the crossbar so far this week but to train a winner for Michael and Eddie at Gigginstown they are massive supporters of me and they will be delighted as much as I am.

“It is great for everyone in the yard. The horse ran well in a three-mile novice and he wouldn’t have been far away had he not fallen late on but I often get to Thursday without no winner then have three or four so we won’t panic yet. I’d say the ground is the key to this lad to be honest. Four or five of my other runners couldn’t handle the ground but that is the game we are in.

“The winner has won well and he is a good horse on his day but we will enjoy this. I don’t know much too much about Shane. He has ridden a few winners for us and he comes up and rides out for us. I thought he gave him a lovely ride and he was patient on him. He didn’t commit too early so we are delighted. You are always delighted to train a winner but to get back here is great. Anyone that knows me is that all I care about is training winners and I love training winners at Cheltenham and we are off the mark now.

“Every winner is important to me whether it is Down Royal, Downpatrick, Newton Abbot or Cheltenham all I care about is training winners.”

Successful jockey Shane Fitzgerald comes from Buttevant in Co Cork and this is his first ride at The Festival as a professional - he rode here a couple of years ago as an amateur. He said:

“It’s absolutely serious - the atmosphere round here… even to ride in the likes of here on an athlete of a horse is unbelievable. I can’t thank Gordon [Elliott] and Mr O’Leary enough for giving me the opportunities… It’s unbelievable.

“We were a little bit slow jumping off, but picked our way through and were fairly handy the whole way. We were wide and had plenty of light the whole way and, to be fair, I didn't want to give Jack too much room. Swinging down to the second-last we half-went chasing him. He was so tough the whole way to the line.

“He’s had some very good runs and a couple of poor runs, but it’s my third time riding him and my second time winning on him, and we seem to have a nice old partnership. Hopefully there will be plenty more days like that.

“He was a little bit sticky [in his jumping early on] and started to have a cut at them then after jumping a couple, and I thought he’d gain at the last but he gave us a bit of a scary moment. He picked up though and came through.  He’s just different class. It’s great for everyone in the yard - there’s a lot of work and a lot of early mornings. I’m delighted for Katie, who’s leading him up. They’ll get a great buzz out of it. It’s massive for everyone [to have a winner] and to be part of it. It’s great even to be getting rides over here, let alone winners - it’s hard to explain [what it means].

“I knew I was up on the line. Darragh [O’Keeffe, on Fastorslow], my neighbour at home, was actually upsides me and we had a good battle the whole way to the line. It’s unreal.

“From the start as a kid I have watched this and seen all the greats coming through, the likes of AP [McCoy] and Davy [Russell] - it’s class, and I’m riding against the likes of Davy now. It’s what dreams are made of.”

"A winner here is very hard to find – 50/1 winners are even harder to find. Gordon has done a wonderful job with the horse, Shane gave him a fantastic ride. But he's third top weight and the ground is gone.

“I think Commander Of Fleet to win that off third top weight was a great performance and well done to Gordon and all the team in Cullentra.”

“It’s agony getting beaten when you are in front four strides from the line, but what a race he's run. He’s a lovely horse, and he handles the ground well. He was up in trip, which helped too. There might be a race for him at Punchestown.”

“What a race, but if anyone was going to beat me I’m glad it was Shane Fitzgerald, who only lives ten minutes away. I’m delighted for him, and my fellow has run a great race.”

“We’re absolutely thrilled with him. He jumped like a buck and was carrying a lot of weight. We thought we’d want to be up there, but I said to Jack not to get into a pulling competition with him. He really enjoyed being out in front the last day and he’s run another fantastic race there.”

“I was happy with him, he jumped and travelled great the whole way and he ran his race. There wasn’t any pace and I was lobbing away and able to dictate it from the front. He ran a cracking race.”

“He’s run really well but, ideally, he wants better ground. He’s had a harder race than would have been ideal, and I just hope it hasn’t bottomed him for Aintree, but he is tough.”

“He ran really well and he’s a very consistent horse who likes it around here. It’s getting tough out there now.”