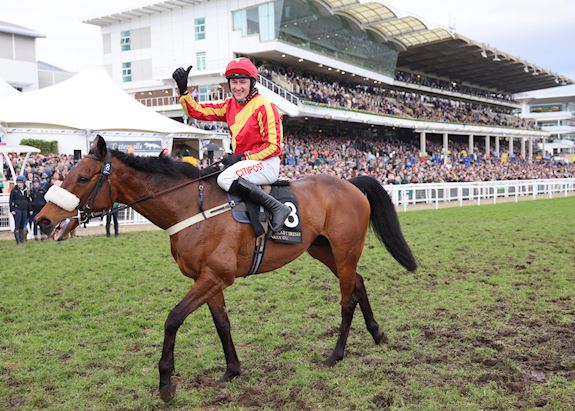 The 11 year old took the honours by six and a half lengths from 7-2 Favourite Imperial Alcazar with another nose back to Spiritofthegames in third,

It Is also a second Festival win for jockey Adam Wedge, following on from Lisnagar Oscar in the 2020 Paddy Power Stayers’ Hurdle.

“It sums him up that performance. He is 11 years of age and he has got so many miles on the clock but he will sit back and kept fighting all the way for you. He is a remarkable horse. This track should be all wrong for him as he jumps right-handed. He is not a particularly brilliant jumper but this is a place is a tough place for tough horses. He is a tough horse. It helped him (losing the lead) if you look back at the tap. Brendan (Powell) has come over and held his racing line which was beautiful race riding and good luck to the boy but that helped us as it just spurred him on. They didn’t go by him and they gave him a chance and if you get into a fight with this fellow there is only going to be one winner.

“It has been a long time since we have had a Festival winner and they are hard to come by. I think as you get older you start to appreciate the little things a bit more. My family at home are very heavily involved. I think every single winner and especially every big winner brings it home how incredibly lucky I am to be doing this for a living. This is a special place and this is a special day. Any winner at the Festival is special. I’m the most boring person in the world. I enjoy a glass of beer and I enjoy a glass of wine but I’m more a cup of tea and digestive man. We savour every moment. It is not about popping champagne corks for me. I get an awful lot of enjoyment out of every single moment the good, the bad, the ugly. It is a wonderful day.

“I thought coming into this we would finish in the first six. He is on a career high mark he is 11 years of age how can he improve. When he got bumped that helped him as you wouldn’t want to go to war with him as he doesn’t back out.

Adam Wedge: “He’s a warrior, isn’t he? An absolute warrior. He’s got cut up on the bend and I think that’s just put more fire in his belly. Once I’ve pulled him out he wasn’t letting them get past him again. For a moment in my mind, I thought, that’s me gone. I pulled him out and I’ve given him a crack, and I could feel the fire in his belly. He’s an angry horse and that made him angrier!

“He just seems to operate round here. For a horse who jumps right, you wouldn’t think a left-handed track would suit him,  but all credit to Evan for getting him to win three big handicaps round Cheltenham. It’s a fantastic effort, and Wayne and everyone who has put so much into the sport - it’s just a pleasure to be riding.

“He was a little bit cold over the first couple and I had to give him a squeeze to get him into our usual position, but from the bend coming into the home straight for the first time, he’s taken me and I was very happy. He’s just a warrior.

“He’s done it in the past once or twice [been a bit ‘cold’ early on in the race] - it’s just when they go so hard to the first couple of fences. He’s not the fastest horse in the world, but he just has the one cruising speed and just keeps going.

“I probably didn’t take it all in as much as I should have first time round [when he won the Stayers’ Hurdle on Lisnagar Oscar in 2020]; we weren’t expecting it and it was a bit of a shock to my system. But to do it today for my boss, Evan, who has stuck by me through a lot of thick and a lot of thin - we’ve had very good days and very bad days - to do it for him means the world to me. I’ll be taking it all in today, that’s for sure.”

“I didn’t fall over this time (like I did when celebrating the Racing Post Gold Cup Handicap Chase in December) as I stayed on the concrete this time. This is the dream there is nothing like it in the world. Someone asked me a moment ago am I missing the tyre trade am I hell!

“He has never battled back like that before but he got carved up but he would have lost his temper no doubt. He is Coole Cody it is simple as that he is just a stone better round here than anyone else.

“This is my first Festival winner and there is nothing like it in the world. I could never have imagined this all those years ago when we had our first horse. I’m lost for words.

“He is like his owner he doesn’t give in. It is unbelievable. This is miles above any other winner I’ve had.”

“I’m very proud of them both, like I was with Alaphilippe. He’s run his heart out. They both had a great preparation coming here and they were both towards the top of the markets and that’s how they’ve run. They’ve run to our expectations and that’s all you can ask. They were very competitive and every day when you get out of bed and send one racing that’s all you can ask. They were both very competitive today so I’m very proud and very happy with them.

“We’ve had a few seconds here now but it will happen one day and I’m not too bothered about it, as long as we’re being competitive. I’m absolutely delighted that the horses are where we felt they’d be and that’s how they’ve run. We’ve come here (to the Festival) with four horses and I was delighted with Poetic Magic yesterday. The ground went for Gumball so I was a bit disappointed with that result, but the filly yesterday and these two today have given us two seconds and a sixth in a Graded bumper – so I’m very happy.”

“He’s run a blinder and we couldn’t ask for anything more. He’s off a mark of 152 and has given the Paddy Power Gold Cup winner 7lbs and fair play to Coole Cody. I feel for the trainer because he’s still looking for his first Festival winner, but we’ve got no regrets. It’s where you want to be and he’s a lovely horse for the future – he’s run against seasoned handicappers and he’s done everything he could. We’ll party tonight as if we’ve won and life goes on.

“This is the only place to be if you can win here. We’ve had some great days with Imperial Commander and then Imperial Aura in the Close Brothers and we just love this track and we love these days out. Fergal has put so much in and he couldn’t do any more. It’s the best of the best in the paddock and that’s where you want to be.”

“He’s done well and he needed every bit of that rain because he was in top gear early. The further he went the better he got but Coole Cody ran very well. We had to give him quite a bit of weight so I’m really pleased.”

“Another bridesmaid’s act but he’s run well. No excuses.”

“I had a lovely ride but he just wasn’t good enough I’m afraid.”