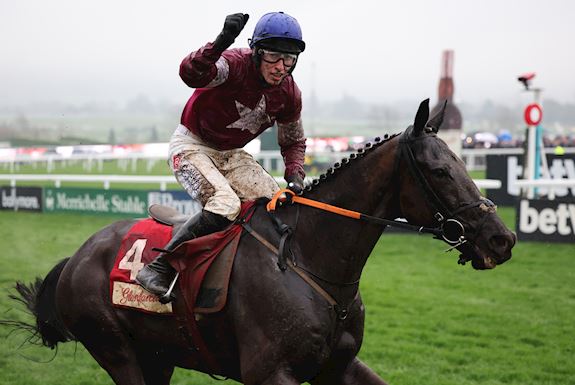 Delta Work (5-2 Favourite) won the Glenfarclas Cross Country Handicap Chase, getting up to defeat stable companion Tiger Roll (3-1) by three-quarters of a length. Both horses are owned by Michael O’Leary’s Gigginstown House Stud and entered the winner’s enclosure together.

The 12 year old Tiger Roll, a five-time winner at The Festival and twice successful in the Randox Grand National (2018 and 2019) was retired following his run today. Tiger Roll’s five wins at The Festival came in the JCB Triumph Hurdle (2014), National Hunt Chase (2017) and Glenfarclas Cross Country Chase (2018, 2019 and 2021). His career earnings came to just under £1.5 million.

“Of course, I wanted the Tiger to win but once I’d won the race I didn’t mind as it was for Gigginstown who are massive supporters of us – and the reception he got when he came into the ring is what it’s all about. He’s been the horse of a lifetime and I’m very lucky to have had him – he goes back to Michael O’Leary’s now. He’s been with us for nine years now and to be honest I had a tear in my eye there, it’s unbelievable. If he’d have won it would have been special but he ran his heart out and we’re absolutely delighted.

“We’ve always had faith in him and it’s brilliant, he’s really enjoyed the game and it’s a great result. The reaction from the crowd didn’t really surprise me to be honest and if he’d have won the cheer would have been unbelievable. He got the reaction he deserved and we’re very proud of him. He will be a big loss for the yard but he’ll only be at Gigginstown which is down the road, so they can go and see him whenever they want.

“The ground really suited Delta Work and it was a great performance from the winner – he can enjoy this race for a few years now.”

“Everybody hates me now but I don’t care! I thought I was always going to get there really. A lot of people don’t like me now after that but it doesn’t really bother me to be honest. After I schooled him the other day I said to my brother that I might be the most hated man in Cheltenham on Wednesday evening, and I was right.

“He’s been very disappointing all year but the switch to this cross country race has rejuvenated him. All of the schooling and everything was brilliant and I’m delighted.

“I thought the ground had gone for Tiger Roll and I was surprised at how well he was going to be honest, but I suppose it was in the back of my head that he might not get up the hill as good as my lad on that ground. I actually expected to pick him up a bit easier, but my lad just ground him down in the end.

“Delta Work is after getting a new lease of life. He hasn’t been travelling as well as he’s travelled today and maybe he’s got sick of it, but this has really lit him up.

“I was disappointed yesterday as I had a great book of rides, but we are on the board now.

“He’s in the Grand National, and I would hope I’d be on him.

“This has to be well up there amongst my riding highlights. I’ve always wanted to ride in a cross country race and this is my first ride in one. It was unbelievable riding a class horse like him, jumping and travelling. It was a great thrill. I’m delighted.”

“The great thing is he (Tiger Roll) has finished in one piece and has come back safe and sound. He will now have a very long and well-earned retirement.

“He could have slipped at the first or pulled up after two fences. All I wanted today was for Tiger to run well and come home in one piece.

“The risk was as I told you before that he might pull up on ground he didn’t like but he was brilliant. He is a warrior.

“He has given us so many great days. He has won here five times, finished second twice and won two Grand Nationals. Don Cossack and War Of Attrition were the best as they won two Gold Cups. This would have just been a fairytale.

“If I could have controlled it, I would have roared at Jack to finish second on Delta. You have to roll so many at the dartboard here and hope that something will stick.

“He ran well and came home sound. We will retire him now and everyone will get to celebrate him as it will be the last time that they will see him run on a racetrack. What a warrior he is he is a legend. I was booing myself and was saying please Jack don’t go past him let him win it God help us. It is not often you want to give away a win at Cheltenham but it really would have been fairytale if he could have won today. He has run a fantastic race and owes us nothing.”

“He is a great horse and he has got a fitting send off so it is great. I always felt Jack breathing down my neck and I would say the rain and the ground just caught us out as Delta work is very effective on that ground and I’d say Tiger is not as effective on it.

“He went down on his sword the way he deserved to go down. You can see the public are fantastic. It doesn’t matter where they are from they are cheering both horses. It is such a marvellous sport we have and we are so lucky. He is just a marvellous horse.

“Tongue in cheek some people booed Delta Work and I didn’t think that was fair as he put in the same effort as Tiger so he deserved the plaudits.

“I don’t think I could have done any different. He likes to get to the front at some stage of the race at this age of his career as he likes to boss a race. I will miss him for sure but that is life and we move on and we live in the fast line.

“He is going to a good home and he has had a marvellous life and career and will be looked after where he is going.

“I’ve not ridden him that many times. I’ve been beaten on him twice and won three times on him. The first National was a bit heart and mouth stuff with the photo finish but the second one was marvellous. Today was marvellous. Any time you get clapped in and out is a special day.”

Darragh O’Keefe, who was aboard third home Plan Of Attack, said:

“Plan Of Attack ran a cracker. I had a good ride off him. He ran his race - the other two horses are rated a lot more highly than him, so we’re delighted.”