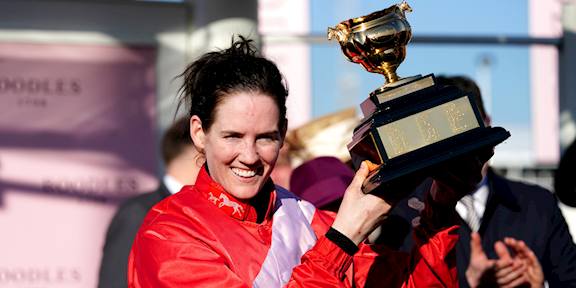 THE FESTIVAL™: RACHAEL BLACKMORE’S FATHER CHARLES REACTS TO HER BOODLES CHELTENHAM GOLD CUP VICTORY ON A PLUS TARD

“It is fantastic. I can’t believe it has happened. It is surreal. I stood in the chute where the grooms usually go. I had Jonathan, her brother, and Charlotte, her sister with me. We all watched it down there together right in the centre of everyone so it was a great place to watch it. She just winged that last fence and ended up winning by 15 lengths. It is hard to believe. Where we are standing we didn’t have a great view but to be honest when you are watching a race like that from my point of view you are only watching her. You don’t even know where the other horses are. She had that wall of horses in front of her and I thought she doesn’t have the engine as she is back so far but it turned out the engine was on low revs until the end when the next thing you know she has pressed the button and she was gone.

“This is a moment of a lifetime to be here and watch her win this. To have all the family here, apart from Eimir, who was holding the fort at home, is just incredible.

“I can’t quite believe what she has done over the last 12 months. She is such a kind person. She speaks to everyone and gives everyone a bit of her time but she also knows when to draw the line. I don’t know how she does it but she is able to balance riding the horse, deal with owners and trainers and the press. She gets a balance that doesn’t upset anyone which is a hard thing to achieve.

“We were always behind her but we were naive in the way we said is there a way out because if she didn’t achieve a certain amount of winners she could turn back to being an amateur. In her eyes that would be failure but in our mind it was a way out if it didn’t work.

“She was never going to go back and she was always going to stick at it and make it work. It has taken a while but she has made it work eventually. She kept building contacts, riding out for different trainers and eventually linked up with Henry and the rest is history.

“She was always determined when growing up. She will be in Thurles tomorrow and that is what she will be focussing on as that is the way her mind works.

“She had such a welcome even with Covid last year. The good will in the town is great and there were signs on both sides of the town and people had posters in windows.

“They really pulled out the boat last year and were really kind to her. They made some presentations on behalf of the town to her and the signs in Killenaule are still up from last year. That is the good will that is there.

“She takes life in her stride and seems to me that in England and Ireland if you mention Rachael you don’t need to mention her second name as people know who she is. That is where we are at. She has done all this herself and has not stepped on people’s toes doing it.

“Johnathan flies back to New York on Monday, and Charlotte is based up in Dublin but I’m sure we will have some sort of celebration when we all meet up again.”