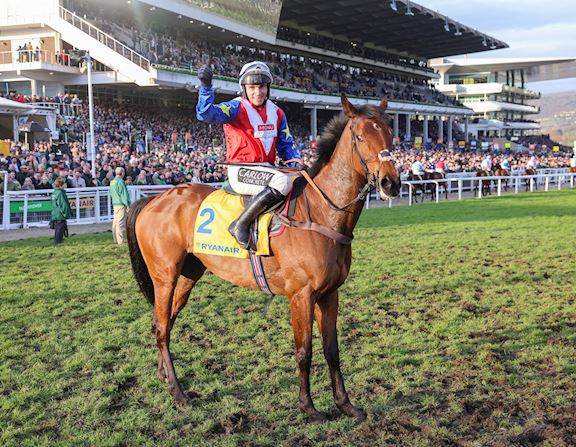 Love Envoi (15-2) became the first British-trained winner of the Grade Two Ryanair Mares’ Novices’ Hurdle. The 2m 179y contest was first run in 2016 and all previous winners were trained in Ireland.

The six year old got the better of 50-1 Ahorsewithnoname by a length and a quarter with another length and a half back to Grangee in third,

It was a second Festival victory for trainer Harry Fry and a first for jockey Johnny Burke.

The winner is owned by Noel Fehily Racing, a syndicate organised by the retired Festival-winning jockey.

“She just doesn’t know when she’s beaten and she’s had a brilliant campaign, winning five on the bounce. It’s funny, Unowhatimeanharry came here on the back of an unbeaten season and these horses just don’t know what it is to lose a race.

“Johnny gave her a lovely ride and turning in you just thought ‘we’re right where we want to be’ and after a good jump at the last we knew she’d stay up the hill.

“It’s brilliant to win it for Noel’s syndicate and Dave Crosse. Looking at the forecast last week I said to the boys that we were losing our heads about the ground, as they had gone Good and they were talking about watering the course. We said we’d declare and see where we were, but watching on Tuesday afternoon when they were breaking track records we thought we could forget about running today! Of course yesterday happened and the rest of course is history.

“We put a lot of thought into her as on the last day she did everything she could wrong and still won and we’re just delighted to see everything come together. We’ll enjoy the next 48 hours and see how she is, but we’ll enjoy this and see what happens.”

“It’s unbelievable. It’s a lot more nerve wracking than when you are riding them! When you are on their back you feel as if you are in control, but when you are stood here watching you have no control. Johnny Burke - what a ride he’s given her. She’s an unbelievably tough mare and we are lucky to have her.

“I told Johnny not to be afraid to take his time. I knew a lot of them wouldn’t get up the hill and I knew she would. He was in a perfect pitch the whole way. It was poetry to watch. What a day for the owners too. It’s absolutely brilliant for them. I’m over the moon for them.

“We weren’t committing even to running earlier in the week, but there was a bit of rain forecast and then the heavens opened. Somebody was looking out for us.”

“It’s surreal. You always dream it will happen, but that’s my first. I’ve had a few seconds, when I was riding for the Potts as a younger man, and I’d played it over in my mind loads of times, but I’m almost speechless. And to do it for Noel Fehily, who was such a great jockey and an idol to me growing up. Noel started with my dad as an amateur in Ireland and I rode against him a bit. Harry’s been very good to me too. There are a lot of people to thank and it’s just great to be a part of it.

“Love Envoi is very special. She’s done everything asked of her and keeps rising to the challenge. Three days ago she wasn’t even running, and then we had the rain. Sometimes these things are just meant to happen.

“Riding for owners like Noel and David (Crosse) is great. They’ve been there and done it and Noel has been on this stage more than most of us. He knows about the pressures that come with it. I had a talk with him and he relaxed me and just let me do my thing. I always knew she’d stay, but she impressed me with the amount of speed she had.”

“Fantastic run from her. She’s obviously a talented mare and handled that ground fine, so that was great at that price [50/1].”

“Grangee ran very well. Paul (Townend) produced her at the right time she was just not good enough on the day.

“Braganza (5th) ran a stormer. She was in the firing line at the last and put in a tremendous effort to finish fifth. She hadn’t been jumping well but Sean (O’Keefe) got a good tune out of her.

“Dinoblue (9th) - I asked Mark (Walsh) to be positive on her but maybe that wasn’t the way to ride her in this contest. We were probably doing too much up the front. I don’t think she lack of experience counted against her as she jumped as well as any mare. She just got tired up front between the last two.

“Heia (13th) ran very well and Rachael (Blackmore) thought she might need a longer trip. Hors Piste (8th) ran a good race and got tired between the last two hurdles but she had her chance.

“They will all be mares that will be stronger next season." 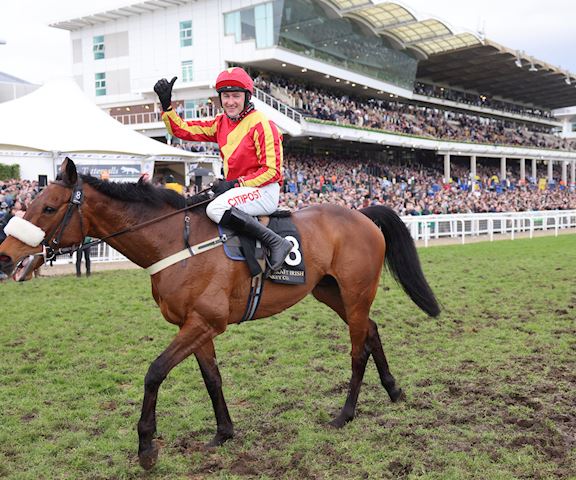