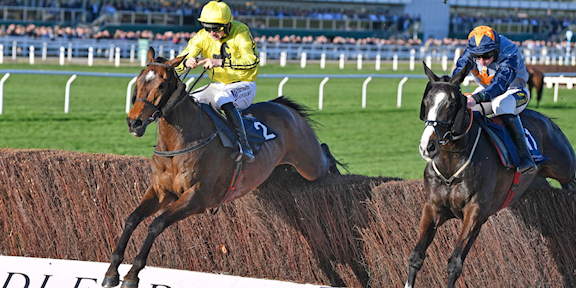 Mullins, the most successful trainer of all-time at The Festival, has now trained 87 Festival winners overall and nine in 2022.

Billaway got up in a thrilling finish under the trainer’s son Patrick to score by a neck from Winged Leader. It was Patrick’s third victory at The Festival in 2022 and his seventh overall.

“We’ve been waiting for this for three years, so it’s brilliant. Patrick never gave up. He had the confidence to keep going, keep going. But much as I enjoy winning I feel sorry for David (Christie, trainer of runner-up Winged Leader), as it would have been huge for him. I know what it’s like losing in the last stride and that’s really his Gold Cup, because he’s a hunter chase man.

I’m delighted for (owner) John Turner as we nominated this race three years ago and we’ve had two seconds. It looked as if he was going to be second again until Patrick pulled it out of the fire. Billaway idles and idles and idles - he’s just that type of horse - and that’s why we put the cheekpieces on.

I’m very pleased for Patrick to do it. As a father and son team It’s a trophy we’ve been trying to win for years, but we don’t have too many hunters.”

“He gets behind the bridle and that’s why we put the cheek-pieces on, and he wasn’t jumping fantastic. It was an effort for him. But in fairness, everytime I asked him, he came. He was very brave at his jumps. I just thought when I landed at the back of the second last, ‘I have a squeak here’. He stays so well and he’s very brave. He deserves this, and Dave Porter who looks after him – magic man.

“He [Willie] is alright at what he does, isn’t he! He’s very good, he has an incredible amount of pressure. To be the boss’s son and get the rides on these horses makes me a very lucky person.”

“It’s just sickening to get chinned like that after the horse has given such a great performance. I’m gutted. Not only for myself, but for David Christie and the horse. He was just so good, he’s so, so tough and jumps and stays. Jamie [Codd] just came to me and in fairness we were getting racing a bit early, but I didn’t want to let him head me. If Patrick had come to me a little sooner we could maybe have fought, but he just went past me in the last stride.

“We can come back, but it’s so hard to take after a performance like that. He wears his heart on his sleeve, and to be nipped like that…”

“I am immensely proud of the horse. He did everything perfect - that’s racing and we are up against the best trainer, in my opinion, in the world. It’s a very honourable place to be. Just getting here is a huge thing, and he is back in one piece, and that’s the big thing.”

Gordon Elliott: “I’m delighted. Camilla [Sharples], my travelling head girl, owns him and looks after him, and it’s great for her. She does all the work with him so it’s a very proud moment for our yard. We’ll see how he is after this, but I’d think she would want him to run at Punchestown.”