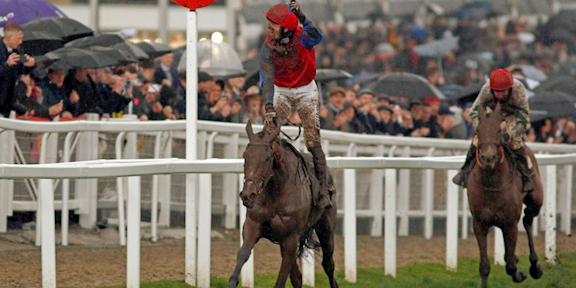 Facile Vega handed trainer Willie Mullins a 12th winner in the Grade One Weatherbys Champion Bumper. It was his 82nd overall winner at The Festival.

The winner was partnered by the trainer’s son Patrick, who was winning the race for the third time. It was his sixth Festival winner.

Returned the 15-8 Favourite, the five year old came home three and three quarter lengths to the good over American Mike.

Facile Vega is out of Quevega, the only six-time Festival winner. Quevega won the Mares’ Hurdle every year from 2009 to 2014 inclusive. Like Quevega, Facile Vega is owned by the Hammer & Trowel Syndicate, for which this was an eighth Festival success.

“He looked just the real deal as we always thought and he proved it today in conditions that were not conducive to him for producing his best. He is at his best on better ground however he looked in really good form.

“I think he could go both ways (either be a Supreme or a Ballymore horse). We will win a maiden hurdle then decide. He gallops and jumps. His mother won over two, two and a half and three miles and he is by Walk In The Park. At the moment I don’t know how good he is and what his best trip is. He covers an awful lot of ground when he is galloping but he has plenty of speed which you saw today and at Leopardstown when he just opened up on good ground. We will see how he jumps but he jumps well enough at home with what we have done but let’s answer those questions (which route to take) when he goes over jumps.

“To me I was comparing him to Florida Pearl who was a very good bumper horse at the time. He would be in the top percentage of bumpers winners I’ve had.

“To me the fact we had the dam and she was so good and that he has come through and looks he looks to be as good as her is fantastic.

“He is very easy to train and we just keep a lid on him all the time. The only pressure I had with him was the pressure I put on myself.

“Gordon thinks a huge amount of American Mike, has great confidence behind him, and he [Facile Vega] just ranged up beside him and went on when he wanted to.

“We think a lot of James's Gate and there's a couple more, Madmansgame and Seabank Bistro, they're all good horses, and he's just better than them all. They'll all be Graded winners, I think.

“I'm really impressed he was able to do that in these conditions. I thought he might need better ground to be as impressive as he was in Leopardstown.”

“It’s not the Champion Chase, but it’s a help! No, it’s a huge buzz - Quevega gives this horse a huge following, and winning in Cheltenham always means a great bit of atmosphere, and I think everyone enjoyed that immensely. We’ve made no secret for a long time that we liked this horse and we nominated him at the start of the season. I rode hhim last spring and gave him a squeeze and Willie had a very stern face afterwards - he thought it might have been too much, but from that far ago he’s been giving us a great feel.

“Riding in that race was like wacky races - bumpers are called that for a reason; they’re like bumper cars, but I didn’t get a fantastic start. They went fast and I was following Paul Townend, but he almost got brought down which knocked us back, and it was a bit like a pinball machine until I got past the stands and I found a bit of space. I just saw Jamie [Codd] on my outside and I said I was going to follow  him, and luckily I had Brian Hayes as my landlord on my outside and I was following  him as we were going in and out of the hurdles - it was difficult, but I was just cantering everywhere.

“He’s a fine big horse. Quevega handled this ground and he sluiced through it. I was a little worried how he’d handle the preliminaries, being a Walk In The Park,  but he walked round lovely and kept very relaxed. He got a little hot going down the chute, but once he was out on the track he was fine. He could have very easily got lit up from all the bumps early on, but he stayed settled and once I was able to get into a gap,  he was able to get me into it before I’d even thought it, and that makes a huge difference in a race like that where a) it’s tight and you’re going in and out and the gaps change every second.”

Asked if he’d make a good hurdler, Mullins replied: “Well, he’ll be a great bumper horse in Punchestown first! I think he is very intelligent, so he should jump very well.”

Talking about Facile Vega continuing the legacy of his dam Quevega, Mullins said: “It just doesn’t happen! She’s a very special mare in every regard. We have his brother, just born last month - well, there are a few of them - coming along now.”

Talking about Chacun Pour Soir, who unseated him earlier in the day in the Betway Queen Mother Champion Chase, Mullins said: “He just met it spot-on and when he put down he just stumbled for a stride… He’s found a leg, tipped right and just put me out the side door. But he just wasn’t jumping like he could.”

“It was a great race and I think we've seen a very good horse there (Facile Vega) but our horse is very good too. We lost nothing in defeat and they'll be two great horses for the future.”

“The winner is bred to be a champion and he looks very good so we’re delighted with our horse, he’s run very well.”

“He’s a very nice horse and he’s probably learned plenty there today. I’m delighted with that and he ran a cracker, he’ll be a lovely horse for next year.”

Brian Hayes, who was aboard the fourth Seabank Bistro, said:

“Everything went well and he had a nice run through. I kind of followed Patrick for a lot of a race and we got a nice run round. Turning in I thought we had a right chance and he’s stayed on so it was a great race.”