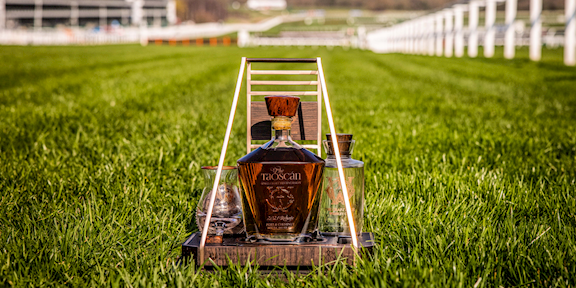 THE JOCKEY CLUB ANNOUNCES THE CRAFT IRISH WHISKEY CO. AS THE NEW SPONSOR OF THE FESTIVAL PLATE HANDICAP CHASE

The Craft Irish Whiskey Co., the most awarded new whiskey brand of 2021 and creator of the most expensive whiskey in the world, is today announced as the new sponsor of the Festival Plate Handicap Chase on Day Three of The Festival™ (Thursday 17th March).

The sponsorship represents the first partnership between The Jockey Club and The Craft Irish Whiskey Co., with the company committing to a two-year deal which will also see it sponsor the 2023 Festival Plate Handicap Chase at the Home of Jump Racing, Cheltenham Racecourse.

This inaugural partnership on St. Patrick’s Day marks a very special day for the proud Irish company whose mission it is to reinvent Irish whiskey, elevating its potential as a luxury spirit and restoring Ireland's reputation for crafting the finest whiskeys in the world.

This St. Patrick’s Day, The Craft Irish Whiskey Co. will release its fourth and latest rare release whiskey, The Taoscán, the world’s first tawny port and French chestnut whiskey, with bottles going on sale in exclusive venues in Ireland and the UK and pre-orders opening online. This partnership with The Festival offers the perfect opportunity to showcase the brand to those with a real appreciation for the finest Irish whiskey.

The winner of The Craft Irish Whiskey Co. Plate will also be presented with a rare collector’s edition of The Taoscán, which retails at €1,200 (£1,000).

“This race sponsorship is the perfect partnership for The Craft Irish Whiskey Co. Cheltenham is such an important sporting occasion for the Irish with passions running high on each day of The Festival. There is a great synergy with the passion from all the Irish that attend The Festival and what we stand for as a brand.

“Everything we do is born out of passion and pursuit of perfection and as a proud Irish company, we could not think of a better partnership or a better day to proudly display our name.

“Business matters aside, I’m also a huge racing fan so sponsoring one of the most prestigious and competitive races at Cheltenham is a personal honour for me.”

Jack Royle, Head of Partnerships for The Jockey Club, added:

“We are delighted to welcome The Craft Irish Whiskey Co. as the new sponsor of the Plate Handicap.

“Fittingly, the 2022 running takes place on St. Patrick’s Day. Hopefully, this will enable this new partnership to begin on a high and we look forward to working with The Craft Irish Whiskey Co. going forward.”

The Festival Plate is one of the most competitive handicaps staged at The Festival. It was first staged in 1951 and last year was won by the Emmet Mullins-trained The Shunter in fine style – another win for Ireland.

The Taoscán will be available to purchase for the first time in selected hospitality areas on the day so that racegoers can toast St. Patrick’s Day and hopefully a winning day for the Irish at Cheltenham.

The Craft Irish Whiskey Co. will also showcase its award-winning, record-breaking whiskeys at The Festival, including its inaugural rare release whiskey, The Devil’s Keep, which broke records when a bottle sold for $60,000 USD, making it the world's most expensive inaugural whiskey release ever sold at auction and which was recently awarded Best Single Malt in Ireland in the No Age Statement category.

Sitting alongside The Devil’s Keep will be the company’s second release, The Emerald Isle, a seven-set collection and collaboration with jewellery house, Fabergé, which became the world’s most expensive whiskey ever sold when it fetched $2million (USD) at auction in the US in 2021, overtaking The Macallan Fine and Rare 60-year-old which sold in 2019 for $1.9m (USD).

Outside of The Festival, The Taoscán will be available to purchase at select venues in the UK and Ireland including Adam Handling’s Michelin star restaurant Frog, Hotel and members club The Ned, The Hand & Flowers; the only pub in the UK with two Michelin stars, The Old Head Golf Links in Cork, amongst many more. In retail, it will also be available exclusively at Selfridges.