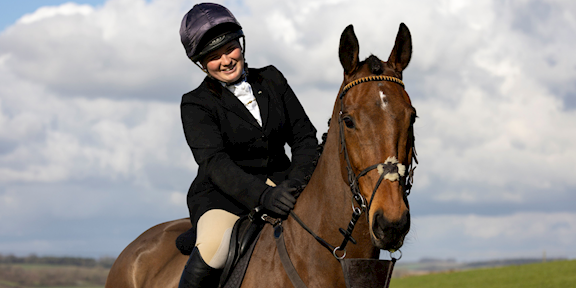 Thistlecrack, one of the most popular and talented Jump horses of recent years, returns to Cheltenham on Tuesday 15th March as part of the annual parade of former racehorses taking place prior to racing on Day One of The Festival™.

Now enjoying a busy retirement, 14-year-old Thistlecrack is one of seven former Festival winners in the line-up. Also making his debut in the parade organised by Retraining of Racehorses (RoR) is Champagne Fever, winner of both the Champion Bumper and Supreme Novices’ Hurdle. The pair feature alongside the 2015 Cheltenham Gold Cup winner, Coneygree, and the 2014 Grand National winner, Pineau De Re, in a parade that showcases the versatility of the thoroughbred.

In a stellar racing career under the care of trainer Colin Tizzard, Thistlecrack amassed earnings of £750,000 with highlights including victory in the 2016 running of the Stayers’ Hurdle at Cheltenham and the King George VI Chase at Kempton Park. Since his retirement from racing in 2019, Thistlecrack has been retrained and is enjoying a range of new pursuits including cross-country schooling, show jumping, hunting and arena eventing.

Now based at Fiona Shaw’s yard near Dorchester, Thistlecrack’s regular rider in his second career is Alice Gillard. Alice is planning a varied programme of RoR classes and competitions for Thistlecrack this year and his progress continues to be closely followed by owners John and Heather Snook.

Champagne Fever, the former Willie Mullins-trained gelding who ran at three consecutive Festivals from 2012 to 2014, winning twice and finishing runner-up, is also thriving in ‘semi-retirement’. The striking 15-year-old grey is enjoying a second career climbing the lower rungs of the eventing ladder with his young rider Georgia Marsland, who reports that the pair “jump round the cross-country with the handbrake on and still well inside the time!”

All 13 horses in the parade are now participating and competing in new disciplines, having been retrained following their racing careers, with several excelling in their new spheres. The line-up includes champions from the show-ring, intermediate level event horses and success stories in both dressage and show jumping.

Di Arbuthnot, Chief Executive of Retraining of Racehorses (RoR), said: “There is a lovely cross-section of horses in the parade. All were high achievers on the racecourse, but while some have gone on to achieve notable success in their second careers, others are simply enjoying an active and fulfilling retirement, hacking around and competing at lower levels.

“The different lives these horses are leading highlights the infrastructure RoR has created for our retired racehorse population, where there is something for everyone.

“Our thanks go to Cheltenham Racecourse and The Jockey Club for the opportunity to showcase RoR’s work at The Festival.”

Retraining of Racehorses (RoR) is British racing’s official charity for the welfare of retired racehorses. The parade will take place in the paddock at 12.30pm on Tuesday 15th March.