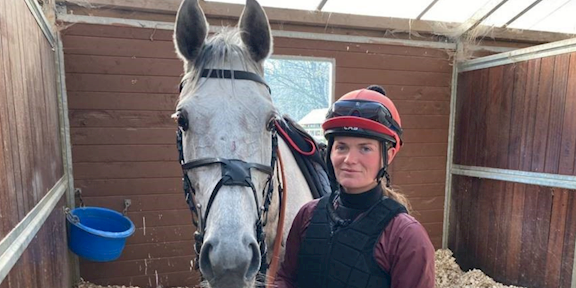 Although no stranger to the Cheltenham winner’s enclosure, success at The Festival has so far eluded the trainer and she admits a victory on the biggest stage of them all would be “beyond our wildest dreams”.

Wadham, who recently turned 64 and has flown the flag for Jump racing in Newmarket from her yard at Moulton Paddocks since 1994, hopes Martello Sky can provide her with the biggest win of her career.

Since claiming her first Listed success in the Irish Thoroughbred Marketing Mares’ Novices’ Hurdle at Cheltenham in April 2021, the daughter of Martaline has added three further victories to her name this season, including a second at Listed level in the Unibet 3 Uniboosts A Day Mares’ Hurdle at Sandown Park on her most recent start in January.

After watching her former stable star United denied victory by the mighty Quevega in the 2009 renewal of the now Grade One contest, Wadham hopes Martello Sky can help ease the pain of that defeat by going one place better on her top-level debut.

Wadham said: “Of course it would be great if Martello Sky could exact the defeat United suffered to Quevega in the race. It would be beyond our wildest dreams if she won.

“United was such a good mare but there wasn’t a mares’ race at the time at Cheltenham and then they created it. However, Quevega arrived and that was that!

“United came to us from Germany from the Flat so she was probably a bit sharper but they are similar in the sense that they are both very athletic and not very substantial looking.

“They are both able to handle any type of ground and I think the other thing they have in common is that will to win. That is something you can’t buy.

“Martello Sky has done all her work now and her schooling. We have just got to keep her right until Tuesday, so that is a bit nerve-wracking but I can’t wait.”

Victory for Martello Sky would also result in a few tears shed in memory of her late Norfolk-based owner-breeder Tim Wood, who passed away in 2020.

Wadham explained: “Tim would have been so thrilled by the whole thing. We all get very emotional when she runs and have a good cry when she wins.

“I was so glad he was there when she won first time out. He knew he had got something special. It is so sad he is not here to see it. He loved his racing and horses.

“He very sadly had a riding accident about six years before he died so he became a quadriplegic and was in a wheelchair for the last years of his life.

“Even so he got to the races and he was such a determined man and he was an inspiration really. His brother Simon Wood and sister Kate Dixon remain involved in The Sky Partnership along with friends Mark and Dawn Dewson and Toby Sexton

“The great thing is she has a younger sister coming through who is two and that is something to look forward to.”

Martello Sky finished down the field at The Festival 12 months ago in the Grade Two Mares’ Novices’ Hurdle. However, Wadham believes she is a much more streetwise individual heading to this year’s meeting.

She continued: “She has become a lot more professional generally. She lacked a bit of experience the first time she went to The Festival and that just found her out a little bit.

“She has just progressed this season and her jumping has really become much sharper. It was hard to predict she would be quite so good this season.

“The thing about her is that she wants to win and she demonstrated that at Sandown last time where she overcame conditions that didn’t suit her and she still wanted to win.

“We were excited about her from quite an early stage. Her first run at Fakenham, Tim (Wood) was there and it was amazing.

“A mile out it looked like she was going to be last then suddenly the penny dropped and she absolutely flew.

“She went through the whole field and won going away by five lengths. I think we knew then that our hopes were well-founded.”

Martello Sky has been partnered to glory on her last two starts by Aidan Coleman, but her regular rider Bryony Frost will be back on board for her Grade One debut, something Wadham is delighted about.

She said: “Martello Sky has always been Bryony’s ride. Paul Nicholls has claimed her the last few times Martello Sky has run but Aidan Coleman has been a wonderful substitute.

“I would say Bryony and Martello have a good bond. She was up here on Wednesday schooling her and that went smoothly, so everything is ready.

“She is great when she comes up and is great with the whole team. She gives us a shot of energy really. She is so full of life. I’m a huge fan.”

While Newmarket might be better known as Flat racing’s headquarters, Wadham reports Martello Sky has received plenty of support from other training establishments in the town.

She added: “It is great when we go out on the heath and the string go by as people often ask how she is and ‘is she all set?’

“We feel like we have got a lot of support from the town which is wonderful. I think the Flat community have been great and they enjoy having something to follow through the winter.

“Newmarket has had several Champion Hurdle winners so plenty of top class Jump horses have been trained in the town over the years.

“Unfortunately we have not quite aspired to those heights just yet but we are still trying. We will enjoy this come what may. As long as she runs her race that is all we can ask.”

Not only would victory for Martello Sky be welcomed by Wadham and her connections, but it would also be a career highlight for her groom and work rider Polly Gunn, who has thought about this moment “15 times a day” for the past two seasons.

The 27 year old, who lives in neighbouring village Kentford, said: “She is a very sweet horse in her box and always has been, but she is very energetic when she is out.

“She has calmed down a bit this season and done a lot of growing up but she has still got that buzz to her, though she focuses her energy on what matters.

“I will be incredibly nervous as I always am when she runs. She loves Cheltenham, and the crowd, and she will get the hype that she needs to get her buzzed up.

“It was a big dream going there last season. Win, lose or draw at Cheltenham she has earned her right to be there.

“I’ve thought about it 15 times a day for the last two years and I think about what I would say if she wins.

“I’d be very emotional for sure and there would be definitely more tears. It would be the best day of my career for sure. I’ve been lucky to be part of her story.

“I’ve been in the industry 11 years and a win here would top it off.”