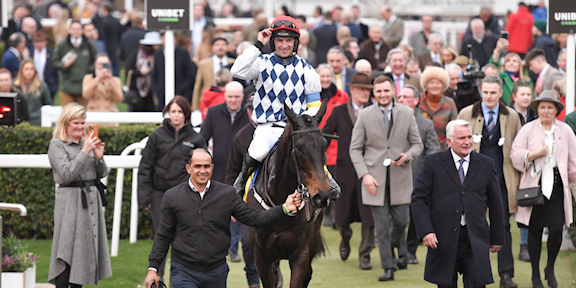 Willie Mullins, the most successful trainer of all-time at The Festival, saddled his first winner at the 2022 Festival and 79th overall when Stattler landed the Grade Two Ukraine Appeal National Hunt Chase (3m 6f) – the concluding contest on day one of The Festival.

Stattler was partnered to victory by the trainer’s son Patrick, who was riding his fifth Festival winner.

The winner is owned by Ronnie Bartlett, sponsor of Friday’s Albert Bartlett Novices’ Hurdle and enjoying his sixth Festival winner as an owner.

A 2-1 chance, Stattler got the better of 15-8 Favourite Run Wild Fred by eight lengths.

“We had to wait til the last - this English dominance going on here all day! I thought Patrick was very cool out there; my nerves were in bits going round the whole time, but Patrick just got him into a rhythm, got him jumping and produced him at the right time. I thought coming round the last bend, when he couldn’t put it to bed before the last bend, that we might be in trouble, but he got him round the bend, aimed him at the second-last and it just happened. He knew he had his measure then. He jumped very well and Patrick got the horse to do the work.

“Stattler is a good jumper, and I think that is why Patrick nominated him early in the season for this race - thinking about himself the whole time! That was the right thing to do because it worked out. He has enough class to win over two and a half miles or three miles.”

“In a big field we all know what we are doing but we were all in there thinking am I going on or you going on. I was planning on jumping off and letting him roll over the first two or three but the pace in the first half a mile he was flat out but after that he started jumping into it.

“For the first lap he just popped, popped, popped, and then the last lap when I started to ask him to have a cut at them he had loads of scope. The third last, second last and the last he was spectacular. My lad is very lazy and even after the third last I could see Jamie (Codd on Run Wild Fred) wanted to get us really racing down to the second last before he put his experience to use.

“I wanted to keep tabs on him but not going flat out down to the second last if I could. There was loads there but he is just laid back.

“I think he is just a far better jumper of fences and if you looked at him in the parade ring with his size and scope he looks like a steeplechaser. His jumping was just brillant today.

“You wouldn’t rule it out (being a Gold Cup horse) but he would need to improve again but he is improving. We were thinking he is maybe a Grand National horse but if he keeps improving he could be a Gold Cup horse.

“I had three rides today and I thought he was the least best of my three chances. He had only had two runs over fences and the other horses had more experience over fences. Experience is hard to give away in this race. It was great to get a nice surprise in the last.

“It is great that I’ve now ridden more winners in this race than Willie but I’ve probably had more firepower than he had!”

“It was a good run and we’ve no excuse. The winner won well and we have no real excuse to be honest. He’s in the English and Irish National so I imagine we’ll go for one of those.”

“It was a lovely run and everything went great. We jumped and travelled but Patrick just had a little bit too much class today. It’s fantastic for the amateurs to be back, that’s where we want to be and it’s wonderful.”

Derek O'Connor, who was aboard third home Vanillier, said:

“It was tactical enough and there was an even pace all the way. I struggled to get my horse into a nice jumping rhythm, so he didn’t run his race – Stattler has done very well to win. It’s great to be back, we had to miss last year of course for public health reasons but I’m thrilled to be back.”