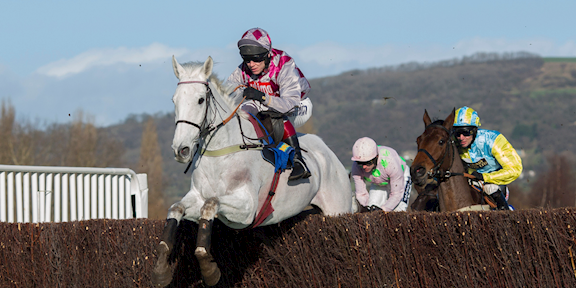 WELLCHILD APPOINTS ITS FIRST HORSE AMBASSADOR FOR THE CHELTENHAM FESTIVAL

As excitement mounts for this year’s Cheltenham Festival, WellChild has appointed a first Equine Ambassador, popular retired racehorse Smad Place, to represent the charity in its work with The Festival™ and The Jockey Club.

A popular grey who was loved for his bold jumping displays, Smad Place quickly became a household favourite amongst racing fans and won the Grade Two Cotswold Chase at Cheltenham in 2016 in his racing days.

Now he will be lending a hoof to help out WellChild, the Cheltenham-based national charity for seriously ill children which is the Official Charity Partner of The Festival.

Smad Place will take part in a number of events to celebrate WellChild’s partnership with The Festival this year, including a ceremony to mark the renaming of the horse walkway as the WellChild Walkway on Day One of The Festival (Tuesday 15th March). The now 15 year old will help officially open the walkway at 12.40pm alongside Randox Grand National-winning jockey Rachael Blackmore, Cheltenham Festival ambassador Barry Geraghty and Colin Dyer, Chief Executive of WellChild.

Smad Place, who is owned by Trish and Peter Andrews, even has his own Facebook, Instagram (@smadplace) and Twitter (@smadplace1) pages where fans can see photos and videos of him.

Trish said: “We are delighted to have Smad become an Ambassador for WellChild as it is such a wonderful charity and one we are great supporters of.”

Sarah Haydon who looks after the now 15-year-old in his retirement said it was a fitting honour for a worthy horse. She said: “Smad is an amazing “nanny” or child friendly fan and my two children aged five and two really do dote on him.”

WellChild Chief Executive Colin Dyer added: “What better way to acknowledge the amazing support the whole racing community is giving to WellChild than to have a much-loved racehorse as an ambassador for the charity?

“We are hugely grateful to everyone in racing from the owners, trainers and jockeys through to the racing fans for the support they are giving to seriously ill children and their families all across the UK.”

WellChild provides essential and practical support to ensure that the increasing number of seriously ill children and young people in the UK have the best chance to thrive - properly supported at home with their families.

The charity, which has The Duke of Sussex as its Patron, provides a national network of children’s nurses, who work with families to ensure that children with complex care needs can leave hospital and return home. Through its Helping Hands scheme, WellChild also enlists the support of volunteers to tackle practical projects in the homes of children with serious health needs.

Through its family training and support services, the charity ensures parents and carers are properly supported and empowered to care for their children safely at home.

During the COVID-19 pandemic WellChild set up a crisis response service to source and distribute Personal Protective Equipment (PPE) to shielding families so that they can let external carers back into their home. The charity has now distributed more than 289,000 items of PPE to vulnerable families across the country since the crisis began.