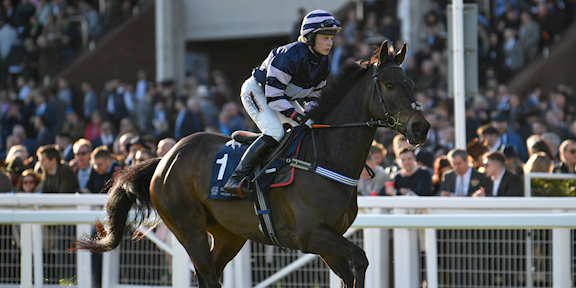 Siblings have been competing against each other at horseracing’s highest level since the sport first began, but a new brother-sister combination will face each other first time under Rules at Cheltenham tomorrow evening (April 29th).

Izzie Marshall, 22, and brother Charlie, 24, are established names in the point to point and hunter chase scenes, riding at some of the top meetings on both circuits.

But now they are ready for their biggest test when they take each other on in the Join Racing TV Now Intermediate Point-To-Point Hunters' Chase (3m 2f) at the Home of Jump Racing.

The siblings have experience of riding against each other in point to points and Izzie, who is based in Oxfordshire, explained that this meeting had been the plan for a while.

She said: “This has been in the pipeline for some time as this race was the aim for both horses, so we were both on the phone together yesterday morning as the declarations were closing! We’re both really looking forward to it.

“It has happened before in point to pointing but we’ve not actually ridden under Rules against each other before, so doing it at Cheltenham is quite a good place for a first!

“We both grew up doing pony racing and Charlie is two years older than me so he laid the path and I followed. We’ve always had a healthy competition and have been involved in a few tight finishes, especially this season. It’s definitely 50-50 and it’s going to be nice to have your brother there doing it with you.”

Izzie will partner the nine year old Voie Dans Voie in the race for Alan Hill, on whom she won a point to point at Wadebridge in December. When asked to summarise his chances, she said: “He won first time out this season and I think he’s got a really good chance of finishing in the first four and I’m looking forward to riding him over those fences.

“I work for the RCA, so I tend to ride a lot on the weekends rather than midweek, but it’s been a really good season. I’ve had 19 point to point winners and one hunter chase season, which is a career best for me and I’m really enjoying it.

“My dream is to ride a winner at Cheltenham. It would be amazing but I’d take just being placed so I can ride back into the winner’s enclosure!”

Meanwhile, older brother Charlie is based down in Dorset and is gearing up for his second ride at Cheltenham tomorrow. The 24 year old is hoping for more luck at the start on this occasion, having been left with plenty to do by a mischievous partner last time out.

He explained: “It’s only my second ride at Cheltenham, so I’m looking forward to it. There are a lot better horses in the race but we’re going for a nice day out and hopefully she runs well.

“I’ve only ridden there once before and the horse was left at the start trying to refuse, so I was tailed off before we got to the first fence! I haven’t had a proper in contention spin around Cheltenham yet so I’m really looking forward to it.

“I enjoy riding against Izzie as it’s nice and it means mum doesn’t have to focus on one race at one time when we’re both there! If we’re in different places our parents split up so there’s always someone there to watch us, so it’ll be nice for us all to meet in the middle.

“Izzie has definitely been going better than I have recently, so it’s nice to see her doing well. We’ve been first and second twice this season, but unfortunately I’ve been on the wrong end of the result on both occasions! One of them she came and did me on the line, which was the worst!

“Under Rules I think it’s 2-1 in winners to Izzie and she’d have over 50 winners pointing while I only have around 45 I think, so she’s definitely in front.”

Charlie is due to partner Luscious Lilly for Andrew Pennock and while he admits that the nine year old won’t arrive here on the back of a perfect preparation, he is hopeful that she can produce a good performance.

He said: “She always runs best in a larger field and while she hasn’t been at her best this year there’s been some underlying problems at home. We think we’ve got her right and we could have done with one more run prior to Cheltenham – so we’re going here hoping that I can build her confidence as I can go.

“Riding at the home of Jump Racing is pretty special and a lot of our friends will be there too - Izzie’s best friend is Gina Andrews (who rides Latenightfumble) and one of my best friends is Alex Chadwick (Castle Trump) - so in the race it will feel like a little family in a way.”

Meanwhile, he revealed that there is a third Marshall sibling, although 21 year old Alfie is unlikely to join them at Cheltenham anytime soon.

He explained: “Our youngest brother Alfie always used to come to the races because be and Izzie were riding and people would ask why he didn’t like horses. He’s into his eventing so nobody used to see him.

“He got fed up of hearing it and decided to ride in one race, just to prove everyone wrong. He rode against me and Jack Andrews in a men’s open race two years ago, I fell and he won it and retired straight away on the spot! He’s unbeaten as a jockey so he’s put me and Izzie to shame.”