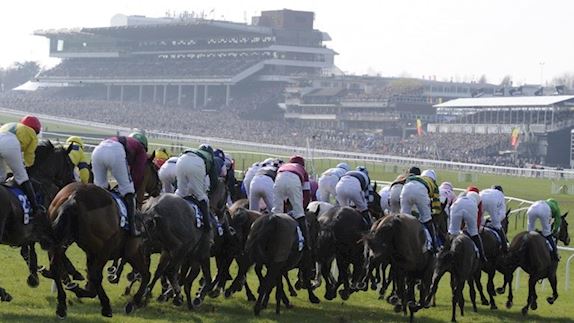 A Herculean effort by Cheltenham's staff has ensured The Festival 2018 will go down as another memorable sporting occasion.

Renton said: "It's been a tremendous week with brilliant racing, even on soft and heavy ground. There have been some memorable finishes, and I'm delighted that we have attracted a record attendance [262,637] for the entire Festival.

"It's an event that is getting better and better, and we now have the facilities to match the quality of the racing.

"The team here has been brilliant in coping with the conditions leading up to the meeting - the groundstaff did an unbelievable job - and similarly, it's been pretty tricky out in the car parks and there has been a tremendous amount of work out there. It won't have been a particularly happy experience parking cars in the conditions, but the team have put in a mass effort to get vehicles in and out.

"We have up to 7,000 staff working here today, we bought in seven miles of trackway and many hundreds of tons of stone, and on Wednesday we even had a complete team working on a new road to give access to a car park."

Horse and human endeavour make a great mix, as witnessed in today's Timico Cheltenham Gold Cup. Renton said: "To see Native River and Might Bite competing in such a great race was wonderful, and for Richard Johnson, Britain's champion jockey, to come out on top was no less than he deserved. Yet great credit must go to the Irish - Michael O'Leary [racehorse owner], Gordon Elliott and Willie Mullins, are but three who have had the most wonderful meeting.

"The Irish have had the success they deserved, but we have witnessed great training and riding performances all week. A wonderful aspect of The Festival is its ability to give everyone a chance of glory. There have been successes for small trainers, women jockeys and young jockeys at the start of their careers - The Festival can put them at the top. I'm looking forward to The Festival 2019 already."

Ms K. Walsh, the rider of SANDSEND (FR), was unseated approaching the final hurdle. After viewing a recording of the incident, it was found that no other horse or rider was involved and was caused by the gelding sustaining an injury and unseating Ms Walsh.

Following the race, the Veterinary Officer reported that TIGRIS RIVER (IRE), which was pulled up, lost its left fore shoe and LE RICHEBOURG (FR), unplaced, and BRELADE, unplaced, both lost their right hind shoes. Nick Williams reported that FLYING TIGER (IRE), which started favourite and finished unplaced, did not stay the trip in the ground, which was Soft, Heavy in places on this occasion. The Veterinary Officer subsequently reported that a post-race examination of the gelding during routine testing failed to reveal any abnormalities.

Permission was given for CALETT MAD (FR) to go early to post and MULCAHYS HILL (IRE) to be mounted in the chute.

TOTAL RECALL (IRE) wore earplugs throughout the race. David Mullins, the rider of TOTAL RECALL (IRE), had remounted having fallen at the third last fence and ridden back without his horse being examined by a Veterinary Surgeon. The rider and the Veterinary Officer were interviewed. Mullins's explanation that he had been given clearance by a person he believed to be a Veterinary Surgeon was accepted. Richard Johnson, the rider of the winner, NATIVE RIVER (IRE), was suspended for 7 days and fined £6,550 for using his whip above the permitted level from approaching the second last fence.

Following the race, Robbie Power reported that OUR DUKE (IRE), which was pulled up, was never travelling.

The Veterinary Officer reported that a kit bag search of Alan Fleming, the trainer of FOXROCK (IRE), revealed possession of Pro-Dosa Boost Oral Paste, an electrolyte trace element replacer. The trainer, the Equine Welfare and Integrity Officer and the Veterinary Officer were interviewed. The explanation of the trainer that it was unopened and had not been used was noted. Being satisfied that the gelding had received only normal food and water by mouth on the day of racing, the Stewards allowed FOXROCK (IRE) to run and the gelding was routine tested. They further confiscated the substance, ordered that it be tested, and referred the matter to the Head Office of the British Horseracing Authority. Permission was given for PREMIER PORTRAIT (IRE) to be mounted in the chute. Following the race, the Veterinary Officer reported that CAID DU BERLAIS (FR), placed fifth, lost its right fore shoe, WARDEN HILL (IRE), unplaced, lost its left fore shoe and WELLS DE LUNE (FR), which was pulled up, lost its left hind shoe. The Veterinary Officer further reported that BURNING AMBITION (IRE), which was pulled up, suffered from mild heat exhaustion, VOLNAY DE THAIX (FR), unplaced, suffered from heat exhaustion post-race and WARDEN HILL (IRE) suffered from mild heat exhaustion.

The winner, LE PREZIEN (FR), appeared to show improved form, compared with its previous run at Cheltenham on 16 December 2017 where the gelding finished eighth of ten, beaten by 35¾ lengths. The representative of Paul Nicholls' explanation that the gelding had jumped poorly on its previous run and on this occasion got into a better rhythm which in turn improved its jumping was noted. LE PREZIEN (FR) was routine tested.

Following the race, the Veterinary Officer reported that ROCK THE WORLD (IRE), unplaced, had bled from the nose, THREE STARS (IRE), placed fifth, lost its left hind shoe and TOWNSHEND (GER), which was pulled up, lost its right fore shoe.

Sandsend broke a leg on the flat before the last hurdle in the Randox Health County Handicap Hurdle and was humanely put down, while North Hill Harvey (fell three out) and Dresden (fell second) incurred pelvic and back injuries respectively in the Johnny Henderson Grand Annual and were humanely put down.