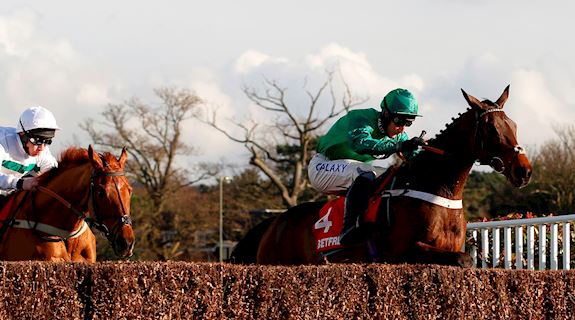 Baron Alco, trained by Gary Moore and ridden by his son Jamie, made all for a brave two-length verdict in the highlight of The November Meeting last month at Cheltenham and could aim to become the fourth horse to follow up in the Caspian Caviar Gold Cup in the same season after Pegwell Bay (1988), Senor El Betrutti (1997) and Exotic Dancer (2006).

Frodon (Paul Nicholls) and Guitar Pete (Nicky Richards) have already tasted glory in the Caspian Caviar Gold Cup, having taken the extended two and a half mile handicap chase in 2016 and 2017 respectively.

Both horses are out to emulate the only previous dual winner of the Caspian Caviar Gold Cup, Poquelin, who was successful in 2009 and 2010 for Frodon's trainer Paul Nicholls.

Four entries from the Lambourn stable of champion Jump trainer Nicky Henderson are headed by last season's Listed Close Brothers Novices' Handicap Chase runner-up Rather Be, who was brought down when travelling well in the BetVictor Gold Cup, and recent G2 1965 Chase third Gold Present.

Robert Walford is hoping that Mr Medic can continue his progressive profile in the Caspian Caviar Gold Cup. The lightly-raced seven-year-old made it five wins from eight starts over fences when comfortably beating G1 scorer Flying Angel in an Ascot handicap chase over two miles and five furlongs on November 23 - his first appearance in 11 months.

Dorset-based Walford revealed: "Mr Medic has come out of his run at Ascot at the weekend in good form.

"He was very good at Ascot and jumped really well throughout the race. James Best gave him a lovely ride. I think Mr Medic will come on for that race as I thought he would need it.

"I think, all being well with him in the next couple of weeks, the Caspian Caviar Gold Cup would be the right race for him.

"We had the race in mind even before Ascot as he seems to like this trip."

Also entered are Baron Alco's stable-companion Benatar, who was third in the G1 JLT Novices' Chase at The Festival™ presented by Magners in March, and Aso (Venetia Williams), who filled the same position in the 2017 G1 Ryanair Chase as well as finishing runner-up in the 2016 Caspian Caviar Gold Cup.

Nigel Twiston-Davies has both Splash Of Ginge, who won the 2017 BetVictor Gold Cup on soft ground and came seventh the following month in the Caspian Caviar Gold Cup, and Foxtail Hill, sixth last year and a dual winner over fences at Cheltenham.

Other entries include Beggar's Wishes (Peter Bowen) and Marienstar (Neil King), with both seven-year-olds going for a fourth consecutive win, plus Forest Bihan (Brian Ellison), third in the G2 Shloer Chase at The November Meeting.

Other highlights of The International, which gets underway on Friday, December 14, include the final leg of the Crystal Cup (https://crystalcup.org), a pan-European series comprising 10 cross country races, with the running of the Glenfarclas Cross Country Handicap Chase, the £60,000 G3 December Handicap Chase and the £32,000 G2 Albert Bartlett Novices' Hurdle.