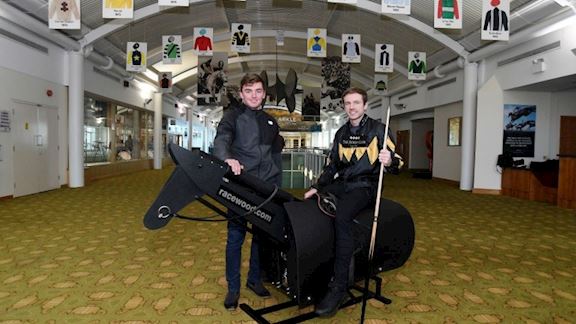 World snooker star Jack Lisowski was given a taste of life in the saddle ahead of a major tournament coming to Cheltenham Racecourse.

Lisowski put his jockey skills to the test on a horse racing simulator under the guidance of Cheltenham Festival winning jockey and fellow Gloucestershire resident Ryan Hatch.

The Ladbrokes World Grand Prix will take place in The Centaur, part of Cheltenham Racecourse, from Monday, February 4 to 10 – featuring the leading 32 players on the 2018/19 season one year ranking list.

World number 21 Lisowski, who lives in Cheltenham, was visiting the racecourse for the first time and was also treated to a guided tour of the Home of Jump racing.

Hatch, his tutor for the day, was forced to retire from the sport earlier this year after damaging his spinal column.

Lisowski is looking forward to being hometown favourite at the Grand Prix but says he is already looking to call an end to his short horse racing career.

“I’m really looking forward to the tournament in February. I had never actually been to Cheltenham Racecourse before today, it’s just incredible,” he said.

“I had a good chat with Ryan, he talked me through the injuries he has had, so I think this will be as far as my career in horse racing will go.

“I’ve never had the ‘local favourite’ feeling before, sometimes it spurs a player on and hopefully that can happen to me at the Ladbrokes World Grand Prix.”

The tournament is a world ranking event and gives fans the chance to see the best snooker players on the planet compete.

It will be the first time the World Grand Prix has been staged at Cheltenham Racecourse, with Ronnie O’Sullivan winning last season’s tournament in Preston.

Sophia Dale, Regional Communications Manager for the south west region of The Jockey Club said: “We were thrilled to invite Jack down to the racecourse and give him a taste of what Cheltenham is all about ahead of the World Grand Prix next year.

“It will be an action packed two months of elite sport for us, with the world famous Cheltenham Festival taking place just a month after the world’s top snooker talents compete in The Centaur.

“We’re sure on his next visit Jack will be back in his comfort zone, swapping the saddle for his cue and doing what he does best on the world stage.”

Ivan Hirschowitz, of World Snooker, said: “This was a fantastic opportunity for Jack to have a look around the superb facilities at the racecourse.

“The Centaur arena looks like a tremendous venue for snooker and we can’t wait to see it packed out in February when the best players in the world will be in town.

“Over the next few months all of the players will be battling to earn one of 32 spots in this prestigious tournament.”

Tickets for the Ladbrokes World Grand Prix are available from www.cheltenham.co.uk or www.worldsnooker.com including fantastic hospitality packages with the chance to watch the event in style.

Set against the beautiful backdrop of the Cotswolds, Cheltenham Racecourse is a stunning natural amphitheatre and offers the highest-quality action throughout the Jump season.

In addition to 16 days racing, Cheltenham is also a renowned Conference and Events venue and is ideally situated within a short distance of major cities and transport links. From a national conference, product launch or business meeting, a grand ball, music concerts or romantic wedding Cheltenham offers a fantastic set up.

Our versatile event spaces, both indoors and out, offer completely bespoke customisation from drinks to dance floors, conferencing to canapés and everything in between.

Cheltenham is part of The Jockey Club which stages thrilling sporting occasions including The Randox Health Grand National, The Cheltenham Festival and The Investec Derby.