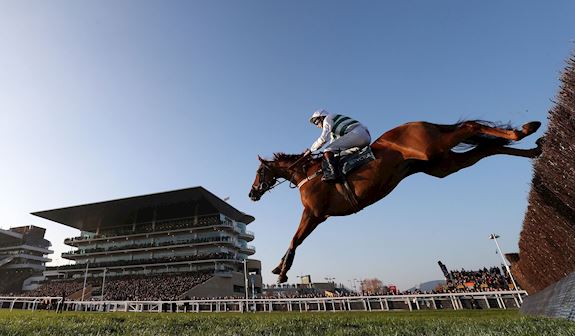 Monday, December 10, 2018 – BetVictor Gold Cup hero Baron Alco remains on course for a rare double as he features among 18 five-day confirmations for the £130,000 G3 Caspian Caviar Gold Cup (1.55pm) at Cheltenham on Saturday, December 15, day two of The International.

Trained by Gary Moore, the seven-year-old has the chance to become just the fourth horse to win both the BetVictor Gold Cup and Caspian Caviar Gold Cup in the same season, after Pegwell Bay (1988), Senor El Betrutti (1997) and Exotic Dancer (2006).

Following his two-length victory at The November Meeting, Baron Alco (11st) has been raised 6lb to a rating of 152.

Frodon and Guitar Pete have already tasted glory in the Caspian Caviar Gold Cup, having taken the extended two and a half mile handicap chase in 2016 and 2017 respectively.

Trainer Nicky Henderson is hoping Rather Be (10st 11lb) has a clear run around after being brought down four fences from home in the BetVictor Gold Cup when still holding every chance.

Henderson, who has trained three winners of the Caspian Caviar Gold Cup, said: “Rather Be is in good form.

“He has come out of the BetVictor Gold Cup well and the Caspian Caviar remains the plan.

“He had no luck whatsoever in the BetVictor where he was brought down, but I have been happy with him since the race.

“He has schooled really well since and will do one more piece of work this week.”

Elsewhere on the card, exciting novice chaser Vinndication (Kim Bailey) may put his unbeaten record on the line in the £25,000 Ryman Novices’ Chase (12.45pm, 12 entries) over an extended two and a half miles. A three-time winner over hurdles last season, Vinndication scored in determined fashion on his chasing debut at Carlisle on November 12.

Quel Destin (Paul Nicholls) and Cracker Factory (Alan King) are on course for a rematch in the opening £25,000 JCB Triumph Trial Juvenile Hurdle (12.10pm, 11 entries), having been separated by a length and a quarter in a similar contest at The November Meeting.

Bun Doran (Tom George) was one of the most impressive winners at The November Meeting when taking the BetVictor Handicap Chase by eight lengths. The seven-year-old headlines 11 entries for the £30,000 Cheltenham Club Handicap Chase (1.20pm, 11 entries) over two miles.

The International gets underway on Friday, December 14, with a seven-race programme headlined by the £60,000 G3 CF Roberts 25 Years Of Sponsorship Handicap Chase (2.30pm, 19 entries) over three and a quarter miles.

The going at Cheltenham is currently

The forecast is mostly dry through the week up until Friday, with temperatures of seven to eight degrees Celsius.