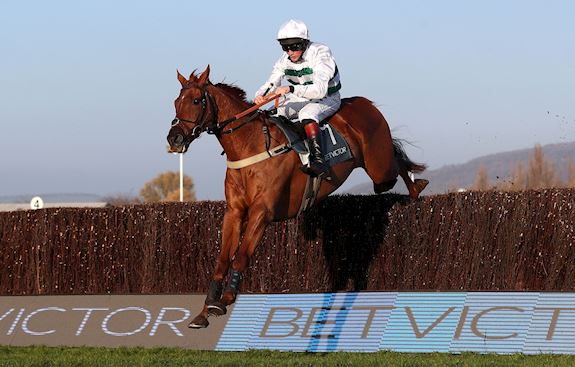 Frodon (Paul Nicholls), who landed this race as a four-year-old in 2016, ran a gallant race under top-weight on his latest start when going down by two lengths to Baron Alco (Gary Moore, 11st) in the G3 BetVictor Gold Cup at The November Meeting on November 17.

Baron Alco has been raised 6lb to a rating of 152 and could become the fourth horse to win both the BetVictor Gold Cup and Caspian Caviar Gold Cup in the same season, after Pegwell Bay (1988), Senor El Betrutti (1997) and Exotic Dancer (2006).

West Sussex-based Moore said: “I have been very pleased with Baron Alco since the BetVictor Gold Cup and the Caspian Caviar Gold Cup is his big target now.

“He is 6lb higher in the handicap and whether or not he can cope with that will depend on what else turns up on the day. If it is a similar sort of race to the BetVictor Gold Cup, I don’t think 6lb would stop him.

“Having said that, I am well aware the way he ridden last time was an advantage because he was kept out of trouble in what was an incident-packed race, and there was probably a couple of hard luck stories in behind.

“The ground all comes the same to him. He is in amazing horse with a great attitude and he will go on anything bar extremes.

“Benatar is still under consideration for Caspian Caviar Gold Cup after his run at Ascot, but I am 99 per cent sure that Casse Tette won’t run.”

Guitar Pete (Nicky Richards, 9st 13lb), who stayed on to take third behind Baron Alco last month, gained his biggest success over fences so far when taking the 2017 Caspian Caviar Gold Cup by two and a three-quarter lengths.

Guitar Pete and Frodon have the chance to emulate Poquelin, who is the only multiple winner of the Caspian Caviar Gold Cup thanks to back-to-back victories in 2009 and 2010.

Rather Be (Nicky Henderson, 10st 11lb) and the mare Happy Diva (Kerry Lee, 10st 2lb) both contested the BetVictor Gold Cup and were travelling well when being brought down four fences from home.

Venetia Williams has three entries to choose from, headed by 2017 G1 Ryanair Chase third Aso (11st 6lb) who was back in the winner’s enclosure on November 30 when annexing a handicap chase at Newbury.

The five-day confirmation stage for the Caspian Caviar Gold Cup is at noon on Monday, December 10.

Other highlights of The International, which gets underway on Friday, December 14, include the final leg of the Crystal Cup ( https://crystalcup.org ), a pan-European series comprising 10 cross country races, with the running of the Glenfarclas Cross Country Handicap Chase, the £60,000 G3 December Handicap Chase and the £32,000 G2 Albert Bartlett Novices' Hurdle.

Cheltenham Racecourse is situated in Prestbury on the northern outskirts of the historic spa town of Cheltenham. The Home of Jump Racing, Cheltenham Racecourse is the venue for the world's pre-eminent Jump meeting. The Festival™ presented by Magners, which happens in March over four days every year, next takes place from Tuesday, March 12, to Friday, March 15, 2019 inclusive and tickets are on sale. Set against the beautiful backdrop of the Cotswolds, Cheltenham Racecourse is a stunning natural arena and offers the highest-quality action throughout the Jump season.  More information is available at  www.cheltenham.co.uk  and through Twitter (@CheltenhamRaces), Facebook  www.facebook.com/thehomeofjumpracing  and Instagram (@CheltenhamRaces).