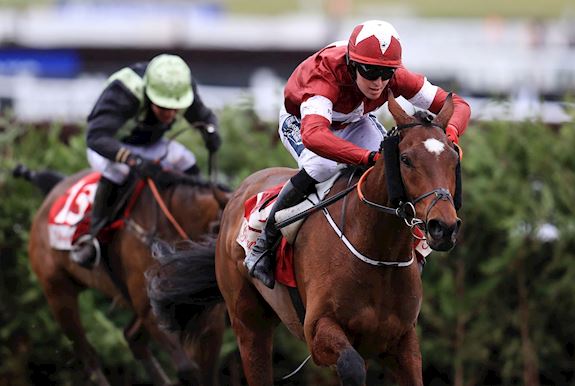 Festival winners among entries for day one of The International

Saturday, December 8, 2018 – Coo Star Sivola and Tiger Roll, who were both victorious at The Festival™ presented by Magners in March, headline the excellent entries for day one of The International at Cheltenham, Friday, December 14.

Coo Star Sivola (Nick Williams) edged out Shantou Flyer in the G3 Ultima Handicap Chase last season and could aim for another major victory at the Home of Jump Racing in the £60,000 G3 CF Roberts 25 Years Of Sponsorship Handicap Chase (2.30pm).

A total of 19 entries for the three and a quarter-mile contest also includes Robinsfirth, who stayed on well to score by two lengths in the race 12 months ago. The lightly-raced nine-year-old, trained by Colin Tizzard, missed the rest of the campaign through injury.

Joe Tizzard, the assistant trainer to his father, revealed today: “Robinsfirth had a little bit of heat in his leg last season but was back in full work at the start of the term and is in good form. The owners - Christine Knowles & Wendy Carter - like going to Cheltenham, so he may run there next week. He is ready to run and will enjoy the soft ground. He is a chaser with plenty of ability but he is a bit fragile.”

Other contenders include the last two winners of the G3 BetVictor.com Handicap Chase at The November Meeting – Perfect Candidate (Fergal O’Brien), successful in 2017, and this year’s victor Rock The Kasbah (Philip Hobbs) – plus the 2017 Ultima Handicap Chase runner-up Singlefarmpayment (Tom George).

Tiger Roll (Gordon Elliott IRE) gained a rare treble at The Festival™ presented by when taking the Glenfarclas Cross Country Chase before going on to glory in the Randox Health Grand National at Aintree the following month.

The eight-year-old, fourth behind Josies Orders (Enda Bolger IRE) over the Cross Country course on his seasonal return at The November Meeting, headlines 16 entries for the £35,000 Glenfarclas Cross Country Handicap Chase (3.05pm).

Enda Bolger, who has won this contest a record seven times, has two entries. In addition to four-time course and distance winner Josies Orders, Bolger could also be represented by My Hometown, a recent winner over the banks course at Punchestown.

Further representation from France could come from Amazing Comedy (David Cottin), who won the Grand Steeple Chase-Cross-Country de Compiegne, the penultimate race in the Crystal Cup, on November 9.

His rivals may include impressive Taunton scorer Southfield Stone (Paul Nicholls), Al Dancer (Nigel Twiston-Davies), who has won both of his starts over hurdles, plus the McNeill family-owned pair of Seddon (Tom George) and I K Brunel (Olly Murphy).

The International continues on Saturday, December 15, when the feature contest is the £140,000 G2 Unibet International Hurdle, a leading trial for the G1 Unibet Champion Hurdle at The Festival™ presented by Magners in March.

Further highlights on a seven-race card include the £130,000 G3 Caspian Caviar Gold Cup and the £32,000 G2 Albert Bartlett Novices' Hurdle.

The going at Cheltenham is currently

Conditions are forecast to remain unsettled.