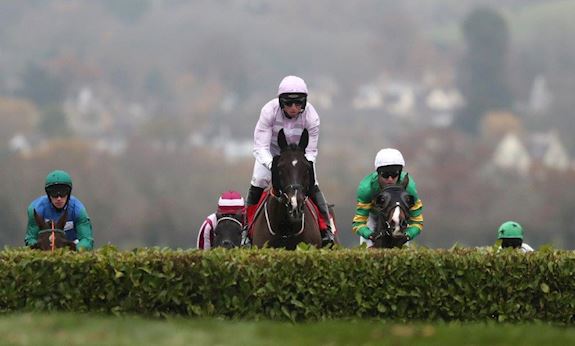 Wednesday, December 12, 2018 – The Crystal Cup European Cross Country Challenge reaches its conclusion this Friday, December 14, with the running of the £35,000 Glenfarclas Cross Country Handicap Chase (3.05pm, 16 entries) at Cheltenham on day one of The International.

The 10-race series takes in many of Europe’s premier racecourses, over unique combinations of hedges, banks, ditches and timber. The challenge begins in Pau in South West France in February and culminates at Cheltenham on Friday, following four further races in France and visits to Poland, Belgium, Italy and to the Czech Republic for the Velka Pardubika.

French-based trainer Patrice Quinton and owner Ecurie des Dunes, who top the trainer and owner leaderboards for the 2018 Crystal Cup, are set to be represented by Vol Noir De Kerser (9st 3lb).

Successful in a cross country chase at Vittel, France, in July on his penultimate start, Vol Noir De Kerser was last seen out when fourth behind Amazing Comedy (David Cottin FR, 9st 9lb) in the Grand Steeple Chase-Cross-Country de Compiegne on November 9.

Quinton said: “Vol Noir De Kerser was fourth at Compiegne but he wasn’t at all ready for it as we had given him a break beforehand due to some other races being cancelled. We ran at Compiegne with the objective being Cheltenham. Thomas [Beaurain, jockey] said a year ago that if any horse could perform well in England it is him, as he is very tough. Winning the Crystal Cup challenge is very important for me and the team, and we are delighted to have achieved it yet again. We love cross-country racing and it also allows us to run abroad as well which is always a great experience.”

Grand Steeple Chase-Cross-Country de Compiegne victor Amazing Comedy already has experience around Cheltenham’s Cross Country course, having finished fifth behind Cause Of Causes at The Festival™ presented by Magners in 2017.

Trainer David Cottin said: “Amazing Comedy came out of his Compeigne run great and is in very good form.

“He was a very impressive winner of the Grand Steeple-Chase Cross Country de Compeigne in November and jumped very well that day. I rode him when he finished fifth over the Cross Country fences at the Cheltenham Festival and we are looking forward to heading back there on Friday.  He should stand a better chance in handicap company now he knows the track. It is my dream to win at Cheltenham and I expect him to run well. The Crystal Cup has been a good initiative and it would be great to win the final leg at Cheltenham. I hope Felix [De Giles, jockey] and Amazing Comedy will give me a good early Christmas present!”

Irish handler Enda Bolger has an enviable record in cross country races and has won this contest a record seven times. Bolger’s two entries are Josies Orders (11st), a four-time winner around Cheltenham’s Cross Country course including at The Festival™ presented by Magners in 2016, and recent Punchestown banks race victor My Hometown (9st 7lb).

The forecast is mostly dry but cloudy up until Friday night, with temperatures of seven to eight degrees Celsius.