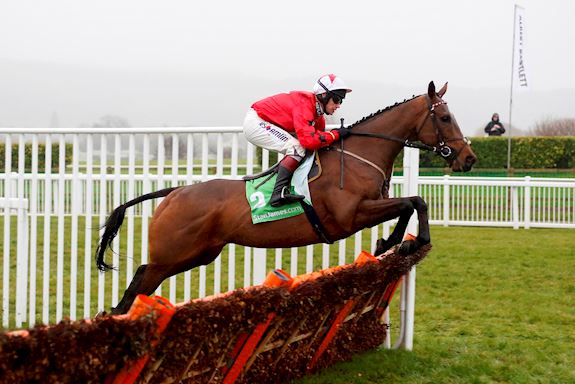 Friday, December 14, 2018 – Admirable 10-year-old The New One bids for an unprecedented fourth victory in the £140,000 G2 Unibet International Hurdle (3.05pm, eight runners) at Cheltenham tomorrow, December 15, day two of The International, in what could be his final racecourse appearance.

The New One (Nigel Twiston-Davies/Sam Twiston-Davies, 9/1 with Unibet) captured the near two-mile, one-furlong (2m 179y) highlight in 2013, 2014 and 2016, and last year narrowly failed in his bid for the four-timer when going down by a length and a quarter to My Tent Or Yours.

The New One comes into tomorrow’s Unibet International Hurdle on the back of a rare poor performance when top-weight in the Welsh Champion Limited Handicap Hurdle at Ffos Las on October 20, finishing a well-beaten seventh behind Silver Streak (Evan Williams/Barry Geraghty, 5/1).

This will be The New One’s 40th race and he has already enjoyed 20 victories. He usually makes the running.

Nigel Twiston-Davies, who trains not far from Cheltenham near Guiting Power, revealed: “The New One is in good form at home.

“His last run was inexplicable, but we are going to try something different this time. He will wear a visor which will hopefully just sharpen him up.

“The New One has been a great horse for us and a privilege to have in the yard – we are looking forward to the race.”

Last season’s G1 Sky Bet Supreme Novices’ Hurdle hero Summerville Boy (Tom George/Noel Fehily) is the 5/2 favourite with Unibet and bids to get back to winning ways after finishing fourth behind Buveur D’Air in the G1 Fighting Fight Hurdle at Newcastle on December 1.

Progressive five-year-old Silver Streak followed up his Welsh Champion Hurdle victory with a neck second to Nietzsche in the G3 Unibet Greatwood Handicap Hurdle at The November Meeting. He will be ridden by Barry Geraghty for the first time tomorrow.

Old Guard (Paul Nicholls/Bryony Frost, 9/1) is also going after further glory in this race, having taken the spoils as a four-year-old in 2015, came third in 2016 and fifth in 2017. He drops back in trip, having finished second on his latest start in the G2 Ascot Hurdle over nearly two and a half miles on November 24.

The Unibet International Hurdle forms part of the Unibet Road to Cheltenham and is a leading trial for the G1 Unibet Champion Hurdle at The Festival™ presented by Magners in March.

The tremendous feature handicap chase on day two of The International is the £130,000 G3 Caspian Caviar Gold Cup (1.55pm, 15 runners) over two miles, four and a half furlongs (2m 4f 127), in which Baron Alco (Gary Moore/Jamie Moore) is chasing a famous double after his victory in last month's feature BetVictor Gold Cup at The November Meeting.

The final race of the day is the competitive £30,000 OLBG Mares' Handicap Hurdle (3.40pm, 10 runners) over an extended two and a half miles.

The International gets underway today, December 14, when the highlight is the £60,000 G3 CF Roberts 25 Years Of Sponsorship Handicap Chase (2.30pm, nine runners) over three and a quarter miles.

The International takes place on the New Course at Cheltenham.

The ground at Cheltenham is currently: Good

Distances are as advertised plus the following for Saturday, December 15:

Conditions are forecast to remain dry until Saturday, when rain is expected from late morning.

Cheltenham is part of The Jockey Club which stages thrilling sporting occasions including The Randox Health Grand National, The Festival™ presented by Magners and The Investec Derby. Millions of people every year enjoy the special experiences The Jockey Club offers through racing, music, food and entertainment. Governed by Royal Charter, every penny made goes back into British Racing to help the sport thrive. The Jockey Club was founded in 1750 and today is the largest commercial group in Britain's second-biggest spectator sport, operating 15 racecourses nationwide, The National Stud, Jockey Club Estates, Jockey Club Catering, Jockey Club Live and the charity, Racing Welfare. For more information, visit    www.thejockeyclub.co.uk