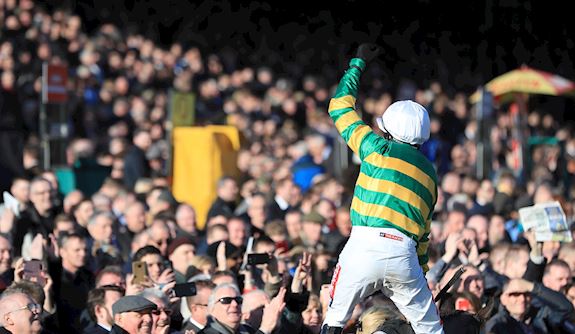 Wednesday, January 16, 2019 - The reigning champion Buveur D'Air stars among 27 entries, up from 23 last year, for the G1 Unibet Champion Hurdle at Cheltenham on day one of The Festival™ presented by Magners, Champion Day, Tuesday, March 12, details of which are revealed today.

Buveur D'Air (Nicky Henderson) has captured the two most recent renewals of the two-mile hurdling championship, worth £450,000, and is trying to become the sixth three-time winner of the Unibet Champion Hurdle since the race's inception in 1927.

Buveur D'Air, successful in 11 of his 13 starts over hurdles, looked as good as ever on his comeback this term when routing Irish hope Samcro (Gordon Elliott IRE) by eight lengths in the G1 Fighting Fifth Hurdle at Newcastle on December 1.

However, he suffered a shock short-head defeat at the hands of stablemate Verdana Blue (Nicky Henderson) in the G1 Unibet Christmas Hurdle at Kempton Park on December 26.

Nicky Henderson, with seven successes, has the best record of any trainer ever in the history of the Unibet Champion Hurdle. The six-strong team from Britain's champion Jump trainer also features G2 Unibet International Hurdle victor Brain Power, Call Me Lord, Charli Parcs and We Have A Dream, who was a leading juvenile last season.

Ireland's champion Jump trainer Willie Mullins is responsible for five of the 12 Irish-trained entries, with his quintet headed by last year's neck runner-up Melon and rising star Laurina, who was a facile 18-length winner of the G2 Dawn Run Mares' Novices' Hurdle at The Festival™ presented by Magners in 2018.

The Mullins' hand is completed by Galway Hurdle scorer Sharjah, who has since bolstered his CV with G1 triumphs at Punchestown and Leopardstown, Cilaos Emery and Saldier.

Espoir D'Allen has been successful on six of his seven starts over hurdles, with a 100 per cent record so far this season. The five-year-old started the campaign with victory in the G3 Fishery Lane Hurdle at Naas in November before registering an impressive eight-length success in the G3 Irish Independent Hurdle at Limerick over Christmas.

The County Meath-based Cromwell said: "Espoir D'Allen is in good form and we are happy with him.

"He will run next week in the G3 Limestone Lad Hurdle [Naas, January 27], and has been given an entry in the Champion Hurdle.

"We will have to see whether he runs in that race at Cheltenham or elsewhere.

"Five-year-olds don't have a great record in the Champion Hurdle, but he is showing the right signs.

"We will see how he gets on at Naas first."

Improving grey Silver Streak (Evan Williams) has made great strides over hurdles this season. After a decisive victory in the Welsh Champion Hurdle at Ffos Las in October, the six-year-old ran twice at Cheltenham, going down by a neck in the G3 Unibet Greatwood Handicap Hurdle at The November Meeting and filling the same position behind Brain Power in the G2 Unibet International Hurdle at The International on December 15.

Four greys have won the Unibet Champion Hurdle, the most recent being Rooster Booster in 2003.

Evan Williams, whose stables are in the Vale of Glamorgan, said: "Silver Streak is in good form and came out of his second in the International well.

"He has enjoyed a great season, with some excellent performances, and has run to a good level.

"I think we will probably run in the Unibet Champion Hurdle. You never know what will happen in these races.

"We are not going there thinking we will win it, but although it is a long shot, we will give it a go.

"Hopefully, there is more improvement to come and better ground is something that suits him.

"He will have a run before Cheltenham in one of the Champion Hurdle trials."

There have been four sponsors. Waterford Crystal backed the championship two-mile hurdling contest from 1978 to 1990, while the Smurfit Group sponsored the top hurdle from 1991 to 2010.

Stan James took over in 2011.The betting operator was subsequently purchased by the Kindred Group, which last year changed the sponsorship to another brand, Unibet.

Tim Molony and Ruby Walsh both have notched up four Champion Hurdle victories.

The biggest shocks in the Unibet Champion Hurdle were provided by Kirriemuir (1965) and Beech Road (1989), who were both returned at 50/1.

The overall age breakdown is as follows:

Grade 1, £450,000 Total Prize Fund. Cheltenham, 3.30pm, Tuesday, March 12, two miles and half a furlong (2m 87y). For four-year-olds and upwards who are allotted a rating of 130 or more by the senior BHA Head of Handicapping following a review of the horses entered and taking account of races run up to and including the day prior to confirmation - horses who are not qualified for a rating in GB, IRE or FR may also be entered (such horses may be eligible providing the Handicapper is satisfied that the horse's racecourse performances up to and including the day prior to confirmation would merit a minimum rating of 130 - the decision of the BHA Head of Handicapping shall be final). Weights: 4yo: 11st 2lb; 5yo+: 11st 10lb; fillies & mares allowed 7lb. Entries closed January 15, entries revealed January 16 (27 entries). Scratchings deadline February 12, £22,500 supplementary stage & six-day confirmation stage March 6, final declaration 10.00am, March 10, maximum number of runners 26.