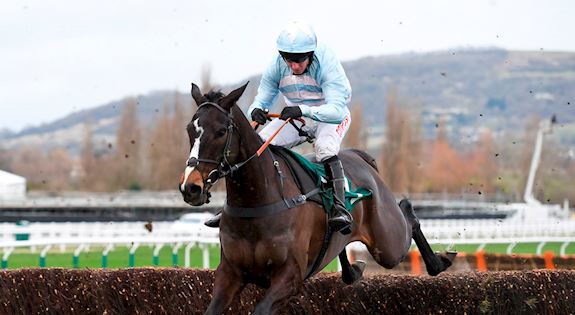 Tuesday, January 8, 2019 – Festival Trials Day takes place at Cheltenham on Saturday, January 26 and offers racegoers the final opportunity to visit the Home of Jump Racing ahead of The Festival™ presented by Magners (Tuesday, March 12 to Friday, March 15).

Black Op enjoyed a great campaign over hurdles last season, taking second behind Samcro in the G1 Ballymore Novices’ Hurdle at The Festival before finishing the campaign with a G1 success in the Betway Mersey Novices’ Hurdle at Aintree. His two starts this season have seen him compete in novices’ chases, most recently finishing third in the G2 BetBright Dipper Novices' Chase at Cheltenham on New Year’s Day.

“He ran well to finish third and was not beaten that far on New Year’s Day, despite making a number of jumping errors. I talked to his owner Roger Brookhouse, jockey Noel Fehily and Yogi Breisner (jumping guru) and Black Op will spend the remainder of the season over hurdles. I think the Cleeve will be his next race back at Cheltenham later this month. He has good form at the track and we are looking forward to the race. Hopefully, he can end the season well over hurdles and then he’ll go to Yogi in the summer for further schooling before a further decision about going back to chasing.”

After taking a handicap hurdle at Aintree in December, he progressed to post a career-best performance at Cheltenham on New Year’s Day when successful in the G2 Dornan Engineering Relkeel Hurdle over an extended two and a half miles, defeating the 2018 winner Wholestone by two and a quarter lengths.

“Midnight Shadow has been in good form since Cheltenham. We were delighted with the performance on New Year’s Day and he saw the trip out very strongly. He is a horse that just improves the further he goes. I think his future at the moment is going to lie over two and a half or three miles. I think as he continues to step up in a trip, the better he will become. He is a special horse. We have a couple of options and the Rendlesham (February 16) at Haydock or the Cleeve Hurdle at Cheltenham are the main possibilities."

Gates open at 10.30am on Festival Trials Day.

Accompanied children aged 17 and under attend for FREE and there is also FREE official car parking at the racecourse.