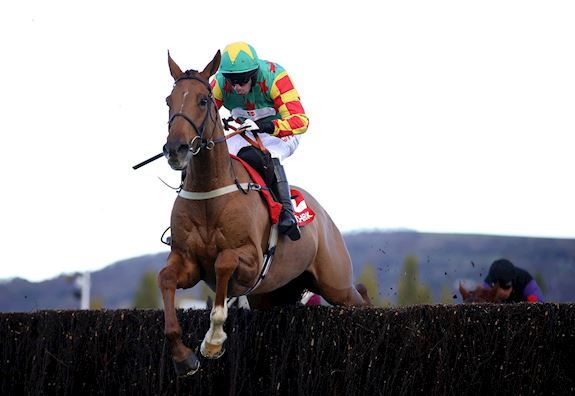 Monday, January 21, 2019 - Cheltenham Racecourse stages Festival Trials Day this Saturday, January 26, with the fantastic seven-race programme offering racegoers the final opportunity to attend the Home of Jump Racing ahead of The Festival™ presented by Magners (Tuesday, March 12 to Friday, March 15).

The feature contest on Festival Trials Day is the £100,000 G2 BetBright Trial Cotswold Chase (2.25pm, 3m 1f 56y), a leading trial for the G1 Magners Cheltenham Gold Cup and entries have been reopened until 11.00am tomorrow.

Although winning his first three starts over fences this season, including at The Showcase in October, connections have decided to revert to hurdling following the eight-year-old unseating his rider at The International and finishing third of four at Ascot in the G2 Noel Novices' Chase, both in December.

"He did well over fences, but he has to keep going up in grade and it was just a question of whether his jumping would stand up to that test.

"The ultimate aim now is the Sun Racing Stayers' Hurdle at the Cheltenham Festival.

"We will see what happens with the Cleeve on Saturday. He could then go for the National Spirit Hurdle (Fontwell, February 24) before The Festival."

The likely opposition to Lil Rockerfeller on Saturday includes exciting young contenders in Emma Lavelle' stable star Paisley Park, successful in the G1 Long Walk Hurdle at Ascot in December, and the progressive Sue Smith-trained Midnight Shadow, who impressed many when landing the G2 Dornan Engineering Relkeel Hurdle over an extended two and a half miles at Cheltenham on New Year's Day and is stepping up in trip.

Entries for the galliardhomes.com Cleeve Hurdle also include the winners from the past two years - 2018 hero Agrapart (Nick Williams) and Unowhatimeanharry (Harry Fry), who took the honours in 2017.

Sam Spinner (Jedd O'Keeffe), won the G1 Long Walk Hurdle in 2017, but has been disappointing in two runs so far this season.

Cheltenham regular Wholestone (Nigel Twistion-Davies) finished runner-up to Agrapart in 2018 before going on to take third in the Sun Racing Stayers' Hurdle. He came home second to Midnight Shadow on his most recent start.

Black Op (Tom George) is another contender who could go back to hurdles having been running over fences, while 2015 Coral Cup winner Aux Ptits Soins (Dan Skelton) was impressive when landing a handicap hurdle over the course and distance on New Year's Day.

Heading the 14 entries is Champ (Nicky Henderson), winner of the G1 Challow Novices' Hurdle at Newbury on December 29.

The seven-year-old, owned by J P McManus, is unbeaten in four starts over hurdles this season and heads the market for the G1 Ballymore Novices' Hurdle at The Festival™ presented by Magners (Ladies Day, Wednesday, March 13).

"It was another good performance at Newbury and Festival Trials Day at Cheltenham is something that I am thinking about for him.

"He did a piece of work last week and we were very happy with him.

"We are looking to go down the G1 Ballymore Hurdle route with Champ."

Nicky Henderson has also made an entry for Birchdale, an impressive winner on his hurdling debut at Warwick in December.

The action gets underway on Festival Trials Day with the £32,000 G2 JCB Triumph Hurdle Trial (12.40pm, 2m 179y, 16 entries). Nicky Henderson could be represented in this contest by Adjali, runner-up in the G1 Finale Juvenile Hurdle at Chepstow in December.

Leading Irish handler Gordon Elliott has made entries for Chief Justice, owned by Cheveley Park Stud and runner-up in G2 company at Leopardstown on December 26. and maiden hurdle winner Surin.

There are three entries from another Irish handler, Joseph O'Brien - Band Of Outlaws, Fakir d'Oudairies and Fine Brunello.

Two interesting contenders from smaller yards are Nelson River (Tony Carroll), winner of the JCB Triumph Trial Juvenile Hurdle at Cheltenham on December 15 and filly Fabianski (Rebecca Menzies), who has won both her starts at Catterick and Wetherby.

The going at Cheltenham is currently Good, Good to Soft in places.

An unsettled week, with some rain, is forecast.