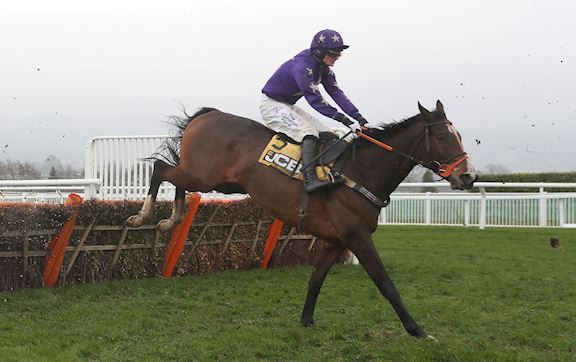 Nelson River is already a winner at Cheltenham this season, having come with a sustained run to land the JCB Triumph Hurdle Trial by a length from Fanfan Du Seuil at The International on December 15.

The four-year-old has now won three of his five starts since joining trainer Tony Carroll, with a Flat success at Wolverhampton in September and a juvenile maiden hurdle at Bangor in November also on his CV.

Carroll, who is based at Cropthorne in Worcestershire, said today: “Nelson River is in good form and, all being well, will be back at Cheltenham on Saturday.

“It was a tough performance at The International. He is only learning still and has come away from it well.

“How he gets on at the weekend will obviously determine possible targets in the spring. He is an interesting horse and this will be another test for him.

“It is possible he may want further in time, but at the same time he is still learning about life – he is a very raw type of horse.

“We will probably go back on the Flat with him as well in the future.”

Nelson River’s opponents are set to include Adjali, runner-up in the G1 Finale Juvenile Hurdle at Chepstow on December 27. His trainer Nicky Henderson has won four of the last six renewals of the JCB Triumph Trial Juvenile Hurdle.

The entries also feature Torpillo (Nigel Twiston-Davies), who has both of his British starts at Sandown Park by a combined distance of 45 lengths and like Adjali is owned by Simon Munir and Isaac Souede.

Elsewhere on the card, the highly-regarded Brewin’Upastorm (Olly Murphy) will drop down in class for the £32,000 G2 Ballymore Novices' Hurdle (3.00pm, 14 entries) over an extended two and a half miles.

An impressive winner on his hurdling debut at Huntingdon, the six-year-old finished a close fourth behind Champ (Nicky Henderson) in the G1 Challow Novices’ Hurdle at Newbury on December 29.

Brewin’Upastorm will enjoy a 5lb pull in the weights should Champ line up as well on Festival Trials Day.

Trainer Olly Murphy, who is based in Warwickshire, said: “I have been very happy with Brewin’Upastorm since Newbury.

“He has improved from that run and we are looking forward to running in him in what looks a good renewal of the G2 Ballymore Novices’ Hurdle.

“He is still very unexposed. The Challow was just his second start over obstacles and it was a good run.

“If Saturday’s race is run at a truly championship pace, that will suit him.”

The going at Cheltenham is currently Good to Soft, Good in places.

An unsettled week is forecast, with up to 5mm of rain.

There are no weather issues expected ahead of Festival Trials Day and tickets are available for purchase at www.cheltenham.co.uk