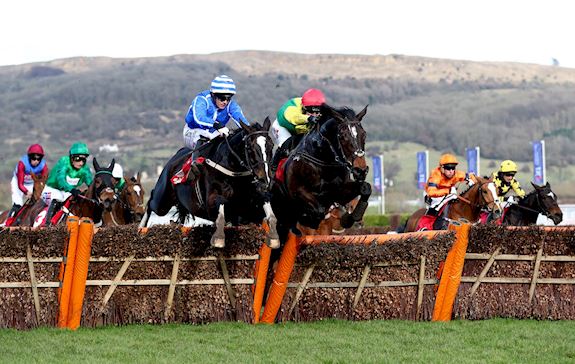 Penhill defied a 323-day absence when defeating Supasundae (Jessica Harrington IRE) by two lengths in the 2018 Sun Racing Stayers' Hurdle, and is set to head to the three-mile hurdling championship again without a recent run. He is going for a third successive win at The Festival™ presented by Magners, having won the G1 Albert Bartlett Novices' Hurdle in 2017.

There are a record 23 Irish-trained entries for the Sun Racing Stayers' Hurdle, with Penhill's trainer Willie Mullins, Ireland's champion Jump trainer, responsible for 11 contenders in total. The Mullins' contingent also features 10-time G1 scorer Faugheen, the 2015 Unibet Champion Hurdle victor, who relished the step up to three miles when beating Penhill by 13 lengths at the Punchestown Festival in April, and the 2018 Coral Cup victor Bleu Berry.

Sam Spinner (Jedd O'Keeffe) looked a potential star when landing the same two races as Paisley Park last season, making all both times under Joe Colliver, but failed to replicate that form when favourite for the 2018 Sun Racing Stayers' Hurdle, finishing fifth.

The seven-year-old has been let down by his jumping on both starts this season, having unseated his rider in the G2 Long Distance Hurdle at Newbury and the Long Walk Hurdle at Ascot when it looked as though he tried to refuse at the second.

"We don't really know why he behaved like that at Ascot. The padded hurdles may have given him a fright, but he has schooled since and seems fine.

"The plan is still to go to the galliardhomes.com Cleeve Hurdle [Festival Trials Day, Cheltenham, January 26] and hopefully all will be good and his confidence will be OK.

"Basically, we have got to try to get his career back on track. If we can get everything right again, the plan would be to return to The Festival for the Sun Racing Stayers' Hurdle."

Another Northern challenger Midnight Shadow (Sue Smith) marked himself down as a contender with a smooth success in the G2 Dornan Engineering Relkeel Hurdle over an extended two and a half miles at Cheltenham on New Year's Day.

Apple's Jade headlines 30 entries for the £120,000 G1 OLBG Mares' Hurdle at Cheltenham on the opening day of The Festival™ presented by Magners, Champion Day, Tuesday, March 12.

Apple's Jade (Gordon Elliott IRE), who won the OLBG Mares' Hurdle (2m 3f 200y) in 2017, could only finish third last year as Benie Des Dieux gained the spoils and gave her trainer Willie Mullins a remarkable ninth victory in the race, which was first run in 2008.

Apple's Jade, one of the 14 Irish-trained entries, is unbeaten this season and on her two most recent outings has recorded wide-margin successes in the G1 Hatton's Grace Hurdle at Fairyhouse and G1 Christmas Hurdle at Leopardstown, staged over two and a half miles and three miles respectively.

"She runs next in the Irish Champion Hurdle at the Dublin Racing Festival [Leopardstown, February 1].

"She will do a bit of work next week and, all being well, that is her next target.

"She is a very good mare who does her best work on the track.

"Apple's Jade is more than likely to go for the OLBG Mares' Hurdle at Cheltenham, a race she has won before.

"She has an entry in the Champion Hurdle, but I think it will be very doubtful that she will go there."

The G1 Sun Racing Stayers' Hurdle, known as the World Hurdle between 2005 and 2016, was introduced with the current race conditions in 1972. Before that, the equivalent race was known as the Spa Hurdle.

Foot and mouth disease controls caused the abandonment of the race in 2001.

The Stayers' Hurdle has been run on the Tuesday, Wednesday and Thursday of The Festival™ presented by Magners. It moved to its current Thursday slot in 1993.

Big Buck's, trained by Paul Nicholls and owned by the Stewart Family, created history in 2012 by becoming the first four-time winner. He was also successful in 2009, 2010 and 2011, but injury ruled him out of challenging in 2013. He was fifth on his final racecourse appearance in the 2014 renewal.

The biggest shock was provided by A Kinsman, a 50/1 chance when scoring in 1983.

The oldest winner was Crimson Embers, who was 11 at the time of his second success in 1986.

The overall breakdown by age is as follows:

The race was dominated in the mid-1980s by Crimson Embers, trained by Fulke Walwyn, who won in 1982 and 1986. Indeed, Crimson Embers would have been awarded the race in the stewards' room in 1985 had his rider not declined to give evidence to the enquiry afterwards, but the trainer won the race anyway with Rose Ravine. The owner, Sally Smart, was ambivalent about the result - she owned both horses!

Gaye Chance, the winner in 1984, was a full-brother to the 1983 Champion Hurdle winner Gaye Brief. Both horses were trained by Mercy Rimell.

The three-time winner Inglis Drever was partnered by different jockeys for each of his victories - Graham Lee (2005), Paddy Brennan (2007) and Denis O'Regan (2008).

No horse has won both the Sun Racing Stayers' Hurdle and the Magners Cheltenham Gold Cup.

Willie Mullins produced Penhill to win the 2018 Sun Racing Stayers' Hurdle on the horse's first start of the season. The seven-year-old had not raced since the Punchestown Festival 11 months previously. Mullins was also successful in 2017 with Nichols Canyon.

Grade 1, £325,000 Total Prize Fund. 3.30pm, Thursday, March 14, three miles (2m 7f 213yds). For four-year-olds and upwards who are allotted a rating of 130 or more by the BHA Head of Handicapping following a review of the horses entered and after taking account of races run up to and including the day prior to confirmation - horses who are not qualified for a rating in GB, IRE or FR may also be entered (such horses may be eligible providing the Handicapper is satisfied that the horse's racecourse performances up to and including the day prior to confirmation would merit a minimum rating of 130 - the decision of the BHA Head of Handicapping shall be final). Weights: 4yo: 11st; 5yo+: 11st 10lb; fillies & mares allowed 7lb. Entries closed January 15, entries revealed January 17 (51 entries). Scratchings deadline February 12, £16,250 supplementary entry stage & six-day confirmation stage March 8, final declarations 10am, March 12. Maximum 24 runners.

Paul Nicholls - If You Say Run

This year sees the 12th running of the G1 OLBG Mares' Hurdle (for the David Nicholson Trophy), which was upgraded to be a G1 contest in 2015.

Previously a G2, the race was founded in 2008 in memory of the legendary Cotswold-based jockey and then trainer, who passed away in August, 2006.

OLBG, the online sports betting community, was the first sponsor in 2012.

"The Duke" enjoyed five successes at The Festival™ presented by Magners as a jockey between 1963 and 1973, but is best known for his 17 victories as a trainer, including wins in the Queen Mother Champion Chase (1994 & 1995 Viking Flagship), Stayers' Hurdle (Anzum 1999) and Cheltenham Gold Cup (1988 Charter Party).

Willie Mullins saddled Quevega to all six of her victories and the trainer has an amazing nine wins in the race in total, with Glens Melody (2015), Vroum Vroum Mag (2016) and Benie Des Dieux (2018) also having been successful.

Ruby Walsh has partnered the winner on eight occasions, having ridden Quevega on each of her six victories, Vroum Vroum Mag (2016) and Benie Des Dieux (2018).

Quevega was sent off favourite for all six of her successes, and was the shortest-priced winner in 2012 at odds of 4/7. Whiteoak sprung a surprise in 2008 as she scored at 20/1.

As well as sponsoring this race, OLBG supports a series of mares' hurdles as part of the OLBG Mares' Road to the Cheltenham Festival.

The exploits of Quevega in the OLBG Mares' Hurdle have been recognised by Cheltenham Racecourse with Quevaga's, a bar situated at the top of the paddock which was launched at The Open in November, 2014.

Annie Power saved bookmakers an estimated £50 million when falling, with the race at her mercy, at the final flight in the 2015 OLBG Mares' Hurdle. Sent off the 1/2 favourite, Annie Power was bidding to become the fourth Willie Mullins-trained and Ruby Walsh-ridden horse to triumph on the opening day of The Festival™ presented by Magners following the victories of Douvan (2/1F) Un De Sceaux (4/6F) and Faugheen (4/5F) earlier on the card. Mullins did gain some compensation as he also trained the winning mare, Glens Melody.