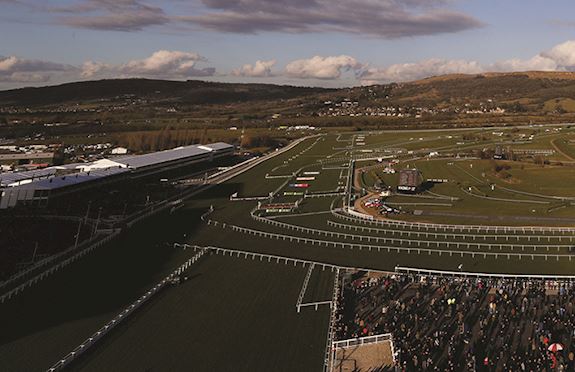 Tuesday, January 15, 2019 - Trainer Ruth Jefferson is planning to send the unbeaten Buster Valentine for a crack at the £32,000 G2 Ballymore Novices’ Hurdle (3.00pm), one of seven races on Festival Trials Day, Saturday, January 26, at Cheltenham Racecourse.

The six-year-old son of Ask won on his one Irish point-to-point start in April and was then sold for £100,000 at Goffs UK, Doncaster, the following month.

Buster Valentine, who races in the colours of the Mount Fawcus Partnership, made a winning debut for Jefferson when the comfortable winner of a two-mile maiden hurdle at Ayr in November.

He followed up on that success last time out when landing a novices’ hurdle over an extended two and a half miles at Newcastle on December 22. He was ridden by Henry Brooke both times.

“He has won his first two starts for us very nicely and he took the step up in trip well at Newcastle last time.

“The target now is the Ballymore Novices’ Hurdle Trial at Cheltenham on Festival Trials Day.

“We are looking forward to running him there."

Staged over two and a half miles, the G2 Ballymore Novices’ Hurdle on Festival Trials Day frequently provides valuable clues for The Festival™ presented by Magners.

Monsignor (2000) followed up his success on Festival Trials Day by taking the G1 Ballymore Novices’ Hurdle at The Festival™ presented by Magners, while At Fishers Cross (2013), Bobs Worth (2011) and Wichita Lineman (2007) all went on to triumph in the three-mile G1 Albert Bartlett Novices’ Hurdle.

The gates open at 10.30am on Festival Trials Day.

Accompanied children aged 17 and under attend for FREE, and there is also FREE official car parking at the racecourse.

Festival Trials Day is the last racing at Cheltenham before The Festival™ presented by Magners, which takes place from Tuesday, March 12, to Friday, March 15.